Chiang Saen: some notes on the history

Some notes on Chiang Saen History 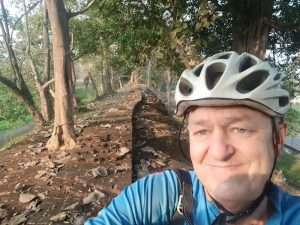 The author Frans Betgem on the city walls of Chiang Saen in 2022Chiang Saen: some notes on the history

Chiang Saen has a very interesting history.I have visited Chiang Saen Historical Park several times over the past few years and I keep going back there. It is one of my favorite places in northern Thailand. I love to have dinner on the pavement with a view of the Mekong River and Laos. Chiang Saen has the best-preserved ancient city walls in Thailand and there are many more ruins and archaeological sites to visit than only Wat Chedi Luang and Wat Pasak. You can easily spend two full days at Chiang Saen. I always bring my own bicycle, which is the best way to explore the Chiang Saen Historical Park. You can rent bicycles at the Fat Free bicycle shop in Chiang Saen. On the Chiang Mai a la Carte website you can find more information about the sights of the Ancient City of Chiang Saen.

In this article, I will focus on the history of Chiang Saen from its foundation in 1327 or 1328. Before that date, there had been already settlements and kingdoms in this area. There might have been settlements called Hirannakhon-Ngoenyang or Yonoknapan. There is insufficient archaeological evidence for both of these versions though. If you want to read more about the pre-Chiang Saen period the history of Lanna from Sarassawadee Ongsakul is a great source. 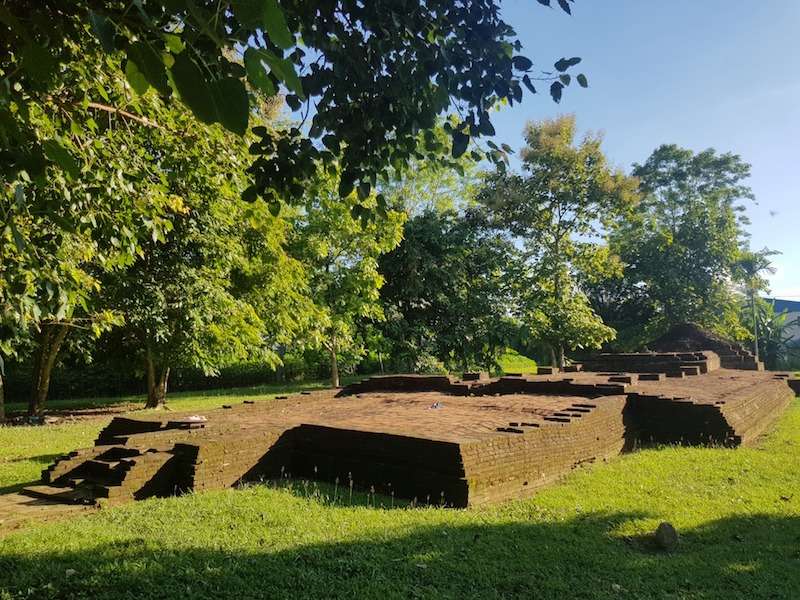 The foundation of Chiang Saen

King or Phaya Mangrai, the 17th king of Ngoenyang, founded the Mangrai dynasty. No reliable written history of the city exists until the arrival of King Mangrai in the 13th century. His grandson, Saen Phu, the third ruler of the Lanna Kingdom, founded Chiang Saen in 1327 or 1328. It served as a control center for communities in the north such as Chiang Rai, Fang, Chiang Khong, and others. Chiang Saen was the most powerful fortress in the region, with deep moats and impressive city walls. Phaya Saen Phu lived in Chiang Saen until he passed away in 1334 or 35. In front of the Wat Chedi Luang, there is a statue of Phaya Saen Phu, the founder of Chiang Saen. 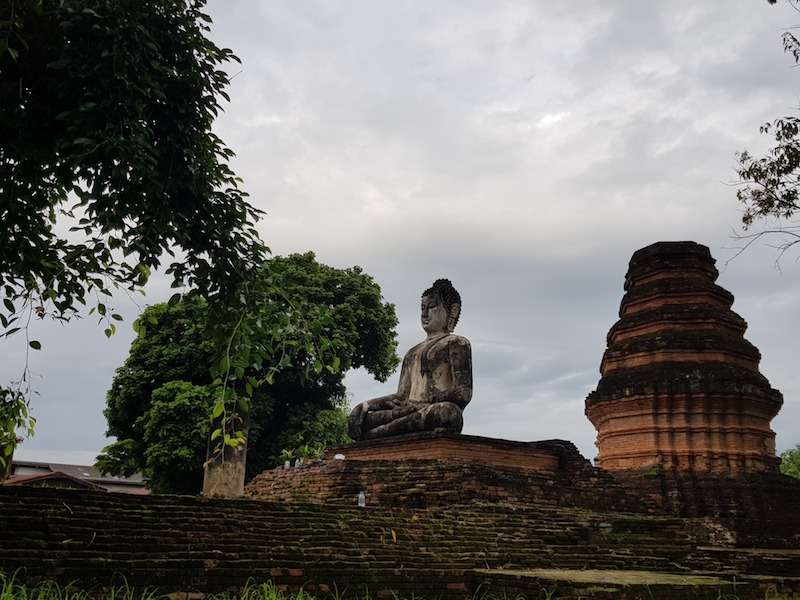 The passing of Phaya Saen Phu 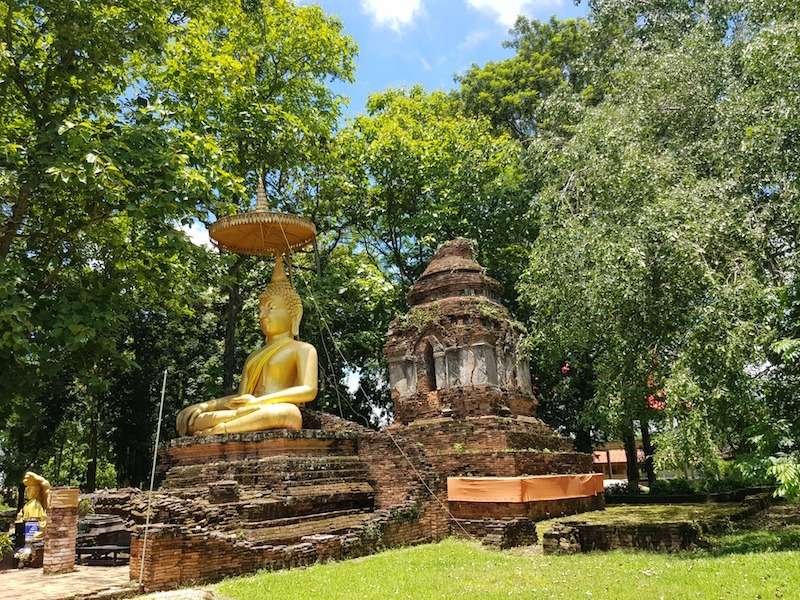 From the early days of the Mangrai Dynasty, the kingdom of Lanna had paid tribute to a kingdom in Yunnan, known as Chiang Hung or Keng Hung. This was a kingdom of the Tai Lue people but in the Chiang Mai Chronicle, they are called “Ho”. Phaya Samfangkaen (1402-1441) was not the first Lanna king who refused to pay tribute to the Ho kingdom but the first who faced attacks by Ho troops. In 1404 and 1405 the Ho army surrounded Chiang Saen. With the help of troops from Chiang Rai, Chiang Mai, Fang, Phayao, and Chiang Khong, the Ho armies were defeated. Chiang Saen appears to have been a very important political and religious center in the period until the Burmese occupation. 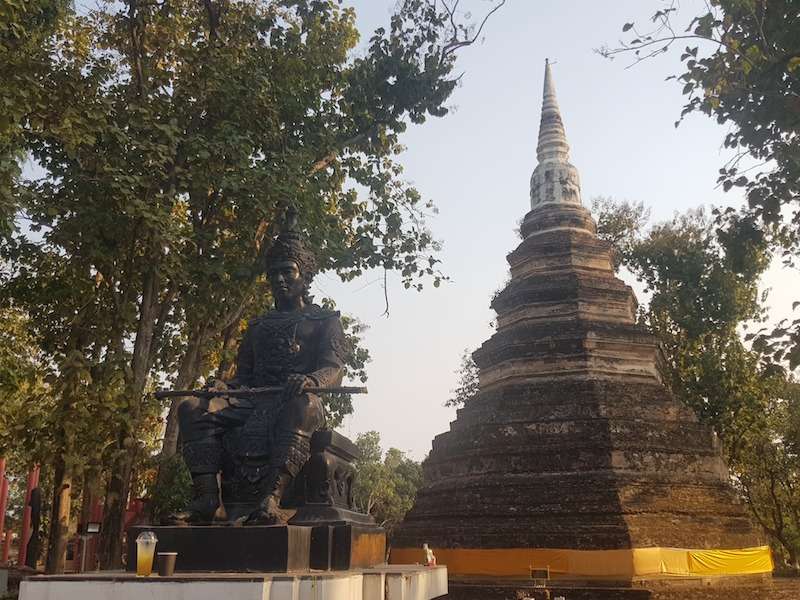 The Golden Age of Lanna

The 15th century is known as the Golden Age of Lanna. It was the reign of Phaya Tilokarat (1441-1487). Lanna was at the pinnacle of its political and military power in the region. Buddhism flourished: during his reign the eight World Buddhism Council met at Wat Chet Yot (Maha­b­o­dharama) in 1477 for one year. Not much can be found about Chiang Saen in this period. It was probably a period of peace and harmony until the gradual decline under Tilokarat’s successors culminated in the Burmese occupation. 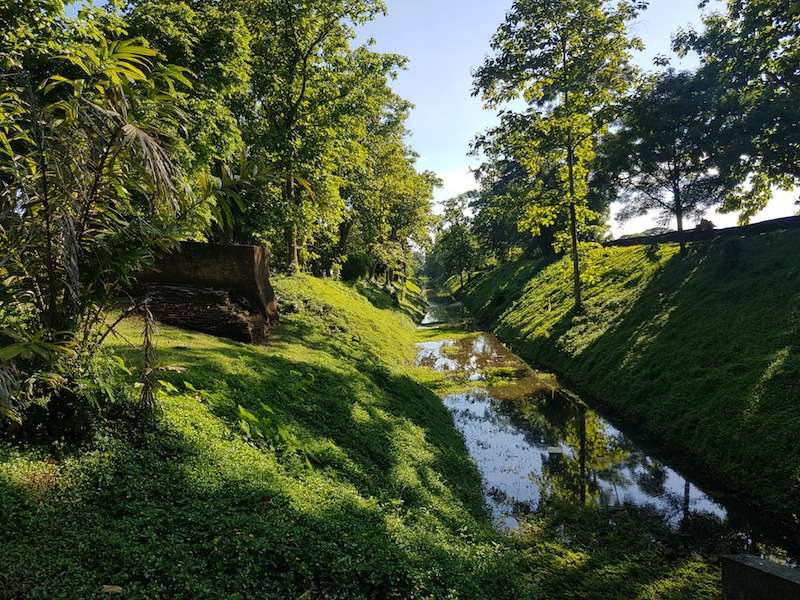 The moat and wall of Chiang Saen

When King Bayinnaung of the Toungoo Dynasty in Burma started his conquest of the Lanna Kingdom, the Lanna forces offered little resistance. The Burmese easily occupied Chiang Mai, which started a period of Burmese hegemony that lasted roughly until 1775. Chiang Saen was also occupied by Burmese troops from about 1558 onwards. Not much is known about Chiang Saen in the period of the Burmese occupation of Lanna which lasted more than 200 years.

According to Ken Kirigaya and other researchers, this period has been purposely overlooked as a “dark age” by Lanna and Thai historians. Justin McDaniel questions the way Thai historians have classified the Burmese occupation as one of destruction, oppression, and intellectual stagnation. That period ended when a group of nobles, led by the later King Kawila and his brothers, succeed in driving out the Burmese forces. Chiang Saen was the last Burmese bastion in the Lanna Kingdom that fell in 1804. 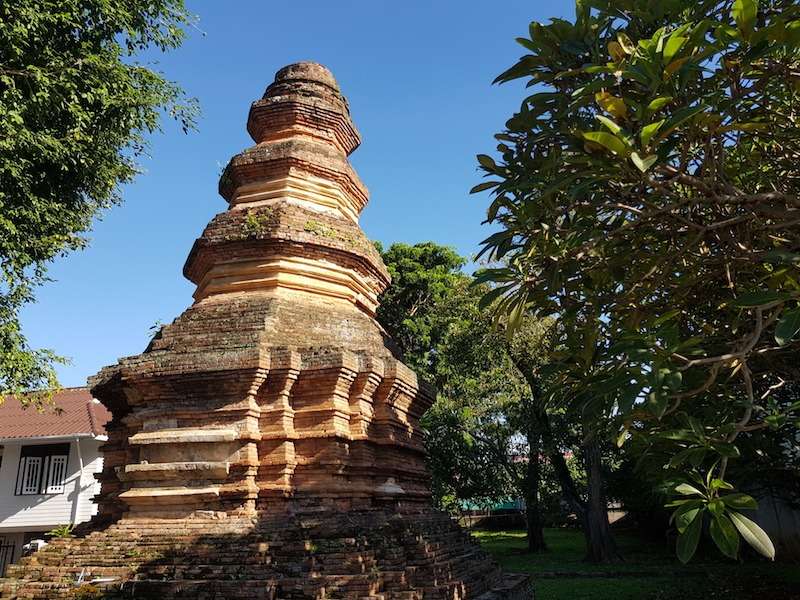 The fall of Chiang Saen

Chao Kawila of Lanna attacked Chiang Saen in 1804 with troops from Chiang Mai, Lampang, Vientiane, and Bangkok and succeeded in scaling the formidable defenses. They either killed or captured the Burmese garrison and expelled the population. It must have been a horrifying experience for the civilian population who became war captives. Kawila’s troops forced them to leave their homes and resettle in different parts of northern Thailand. Chiang Saen was left abandoned and in ruins. Holt Samuel Hallet mentions that the “Ping Shan” forces attacked Chiang Saen numerous times between 1790 and 1804. That these attacks were unsuccessful is evidence of the strength of the fortifications. 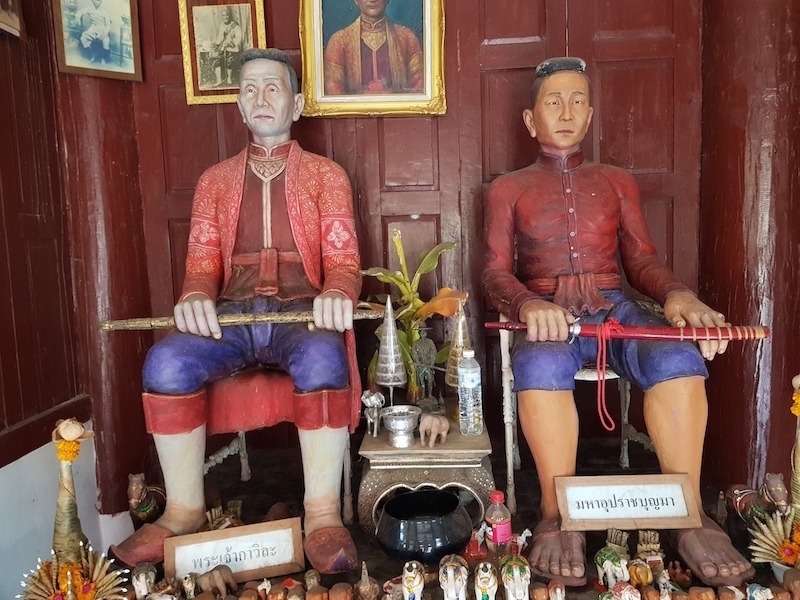 King Kawila and his brother Boonma

Holt Samuel Hallett (1841-1911) was a British railway engineer who visited Chiang Saen in 1884. Hallett came to Siam and the Lanna kingdom in 1879 to survey a route for a railway that would connect British Burma with China. Afterward, he wrote the book “A Thousand Miles on an Elephant in the Shan States” (1890). In early 1884 he arrived in Chiang Mai, accompanied by Rev.Dr.J.N.Cushing of the American Baptist Shan Mission, who was his interpreter. They invited Rev.Daniel McGilvary, the founder of the Presbyterian mission in Chiang Mai to join them on a trip to Chiang Saen. McGilvary wrote about this trip in his book “A Half Century Among the Siamese and the Lāo”, published in 1912. 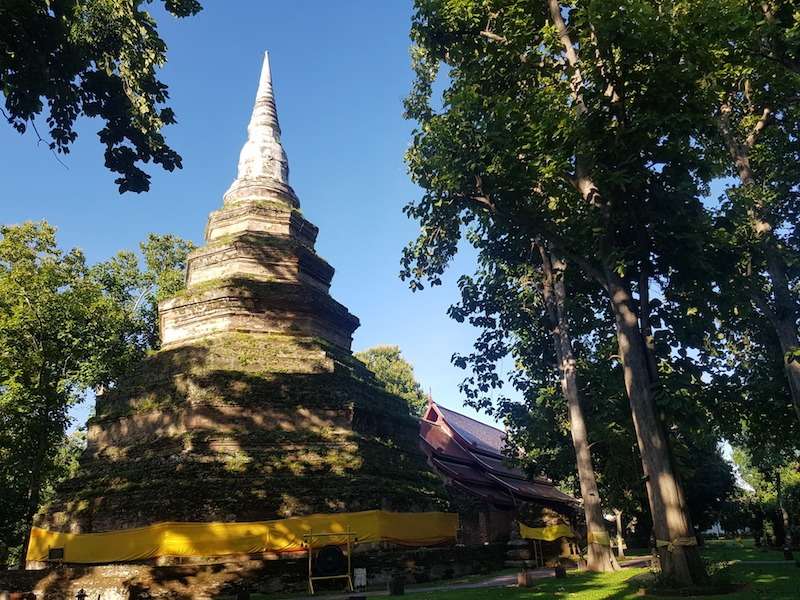 Hallett was one of the first westerners to visit the ruins of “Kiang Hsen” as Chiang Saen was called in those days: “After breakfast, we rambled through the city, about half of which was covered with the remains of fifty-three temples, and of monasteries and pagodas in their grounds.”…”Splendid bronze images of Gaudama (Frans: Buddha), generally in a good state of preservation, were scattered about in every direction, and often half buries in the débris of the fallen buildings.” He was impressed with Kiang Hsen and describes the fortifications in detail. He remarks: “the people of the city in olden times must have been numerous, wealthy, highly skilled in the arts, to account for the number of monasteries, and the workmanship displayed in the images and buildings.” His account is the most detailed one of the history of Chiang Saen.

He also mentions that King Rama V intended to repopulate Chiang Saen in 1881 with descendants of the former inhabitants who lived in Chiang Mai, Lamphun, and Lampang. This repopulation effort failed miserably as British Consul Reginald Le May found out when he visited Chiang Saen in 1914. 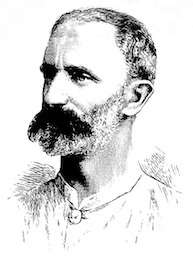 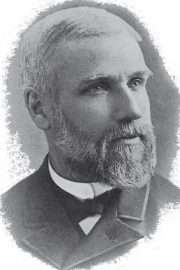 Reginald Le May served in the British consular service from 1908 to 1922. He first visited Chieng Sen, as Chiang Saen was called in those days, in his capacity of Acting Vice-Consul in Lampang in late 1913-early 1914. After that, he went back to Chieng Saen at least one more time and spent several days there. He wrote extensively about Chieng Saen in his book An Asian Arcady, The land and peoples of Northern Siam, published in 1926. On the map in the book, a place called New Chieng Sen appears, which was southwest of Old Chiang Saen, on highway no.1 from Mae Chan to Mae Sai.

Le May’s account is a very interesting description of a desolate and abandoned ruined city. According to him the repopulation effort of the Siamese King completely failed because of the lack of rice, chicken, and other foodstuffs. There were only 70 people left in the ruined city and some people migrated to New Chieng Sen. When Le May and his servants started exploring the overgrown ruined city they stumbled upon a very peculiar sight: “Lying in a kind of ring, and so cunningly surrounded by bushes that one might pass ten yards to the right or left without noticing them, where tens upon tens of images of the Buddha, molded in bronze or carved in stone, of every size and posture;” 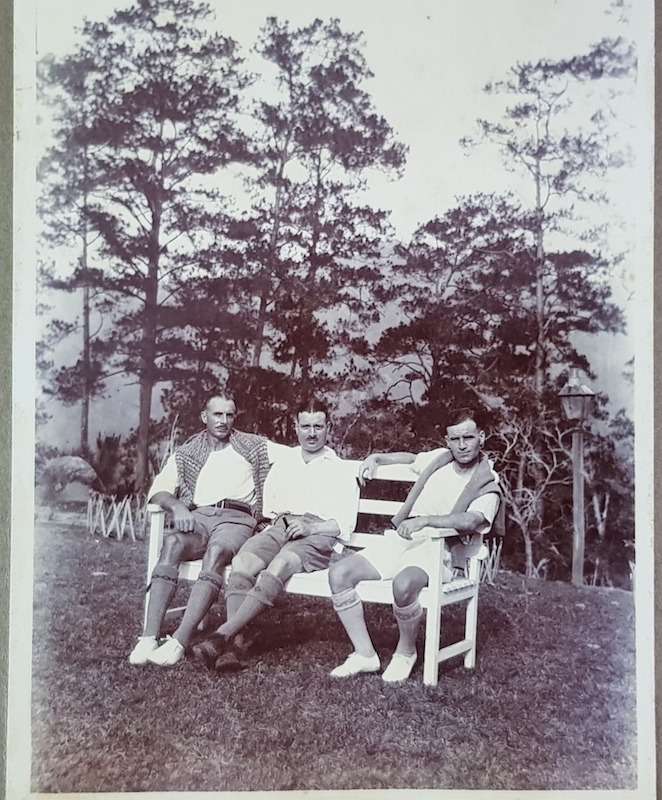 British consul Reginald Hillyer on Doi Khuntan in the 1930s. The man on the right is Frank Frere, on the left is an unknown man

The ruined city of Chiang Saen in 1930

Lampang-based British vice-consul Reginald Hillyer wrote this in his report of a consular tour in 1930 to Chiang Rai about Chiang Saen: “Most of the towns in Northern Siam are of ancient origin, but in practically every case the ancient landmarks are fast disappearing and new erections rising in their stead; names may remain the same but the communities are altering in appearance, adopting a vastly different character. These modern towns tend to be a uniform model – government offices in the center, house of local people grouped round, two long streets given up to the market and Chinese shops;

European compounds bordering the river, native houses, and remains of old temples and pagodas scattered about indiscriminately – and the places visited on this tour are no exception to the rule. Old Chiengsen – on the Mekong – alone drowses content in the memory of its former splendor and, as it is off the main road to the Shan States. No important line of communication with French Laos is ever likely to terminate at that point, it is to be hoped that it will retain its character for some time to come. Ruined temples abound and a multitude of images of Buddha is to be seen, many headless, alas – relics of one or other of past Burmese invasions.” 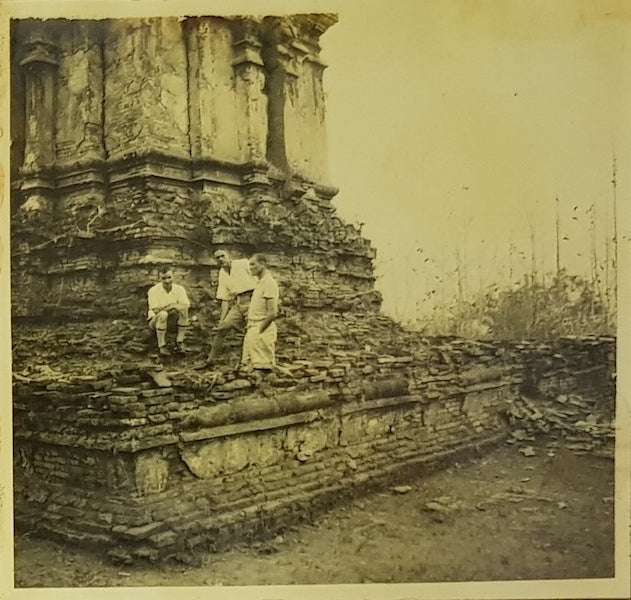 Frank Frere, Raymond Ffolkes Gill and an unknown man on the chedi of Wat Chom Kitthi in 1936, album Philip Page

The staff of the Louis Leonowens Company visits Chiang Saen

In June 1936 employees of Louis T.Leonowens Co.Ltd made a trip to the Golden Triangle and Chiang Rai. They were the manager Frank Frere and employees Bert Higgins, Philip Page, and Raymond Ffolkes Gill. Anglo-Siam Corporation Limited employee Guy Hartley joined them. They were all British. Pictures of this trip appear in the photo albums of Frere and Page. They traveled on road no.1 from Lampang to Muang Phan and onwards to Chiang Rai. Frere, the Leonowens manager, probably owned the vehicle, a 1935 Ford Convertible model.
They visited Wat Tham Phum, close to Wat Tham Pla, and stayed in Chiang Saen in the bungalow of the French company Compagnie Asiatique et Africaine”(Department Est Asiatique Français) on the Mekong, where Maurice Colchester stayed a year earlier. There they met with employees of this French company and visited Wat Phra That Chom Kitti. I think this bungalow was located just south of Chiang Saen. It has been demolished, unfortunately.
Not until the late 1950s did the first preservation project in Chiang Saen take place. This article on Chiang Saen History is an ongoing project. I will do more research. 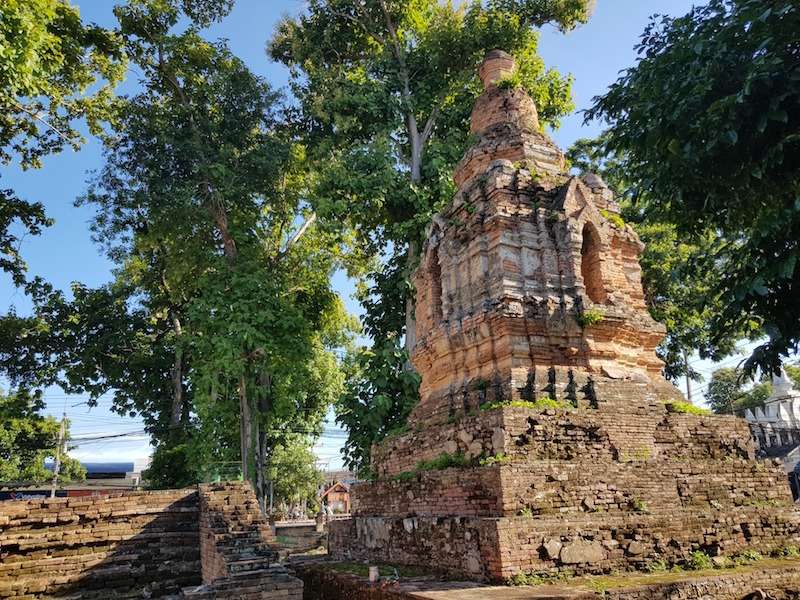 The chedi of Wat Mung Muang

Sources for this article

Some sources on Chiang Saen History:

Hallett, Holt Samuel: A thousand miles on an elephant in the Shan states, Edinburgh, London, W. Blackwood and sons, 1890

Andrew Turton and Volker Grabowsky,  The Gold and Silver Road of Trade and Friendship: The McLeod and Richardson Diplomatic Missions to Tai States in 1837, Chiang Mai, 2003

Daniel McGilvary, A Half Century Among the Siamese and the Lāo, 1912

Ken Kirigaya, Some Annotations to The Chiang Mai Chronicle: The Era of Burmese Rule in Lan Na, Journal of the Siam Society, 2014