The first aerial photographs of Bangkok

I would like to share some fantastic old aerial photography of Thailand on this page. Steve Darke, the founder of the Thai Aviation website, sent these five pictures of Bangkok. These photos come from the Arlanda Collection, Sweden, and are the oldest aerial photos of the city, as far as I know. The crew of a Bréguet 14, a French-built single-engine two-seat biplane, took these stunning photographs in 1921. This airplane served as a bomber and reconnaissance aircraft during World War I. The designer was Louis Bréguet who flew the first prototype on November 21, 1916. The Bréguet factory produced 7800 of this type, which was in use worldwide. The Royal Thai Airforce Museum in Bangkok has a replica on display. 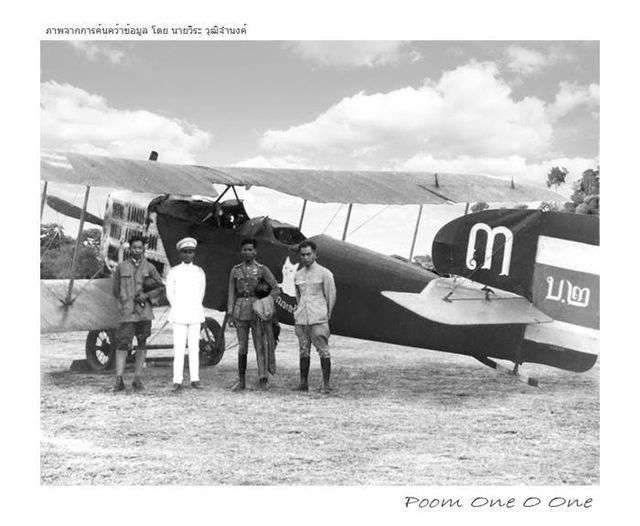 The Bréguet 14 and its crew. The registration is on the tail of the plane. Courtesy: Steve Darke.

The Temple of the Emerald Buddha

This is a magnificent picture of Wat Phra Kaew (วัดพระแก้ว), the temple of the Emerald Buddha, in Bangkok. On the picture is some hand-written information. It mentions the name Wat Phra Si Rattana Satsadaram (วัดพระศรีรัตนศาสดาราม), which is the official name of this temple. They took this picture on August 26, 2465 (1921) at 10 o’clock in the morning at an altitude of 400 meters. A part of Sanam Luang, the field in front of the temple, is visible at the bottom of the picture. On the left is the building of the Ministry of Defence. 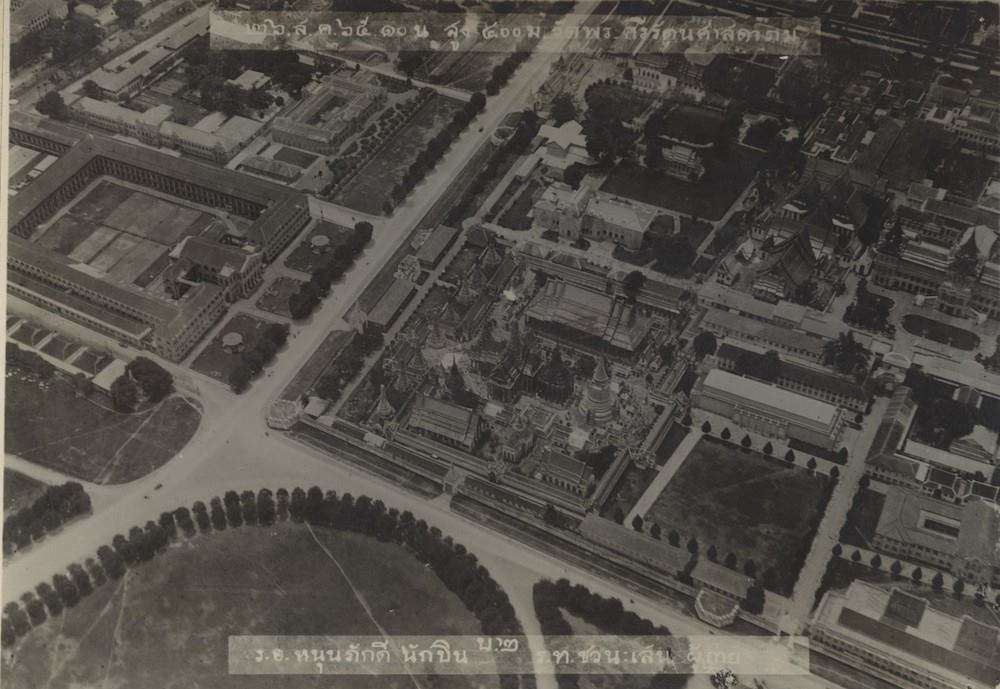 Wat Sutat and the Giant Swing

Beautiful picture of Wat Suthat (วัดสุทัศน์) and the Giant Swing aka Sao Chingcha (เสาชิงช้า). This picture was taken on August 26, 2465 (1921) at 10 o’clock in the morning at an altitude of 400 meters.  The Pilot again was flight lieutenant  Noonphakdee. The photographer was a flying officer  Chuanasen.  The block of houses opposite the Giant Swing has been demolished many years ago and is now an open area in front of the Bangkok Metropolitan Administration City Hall. 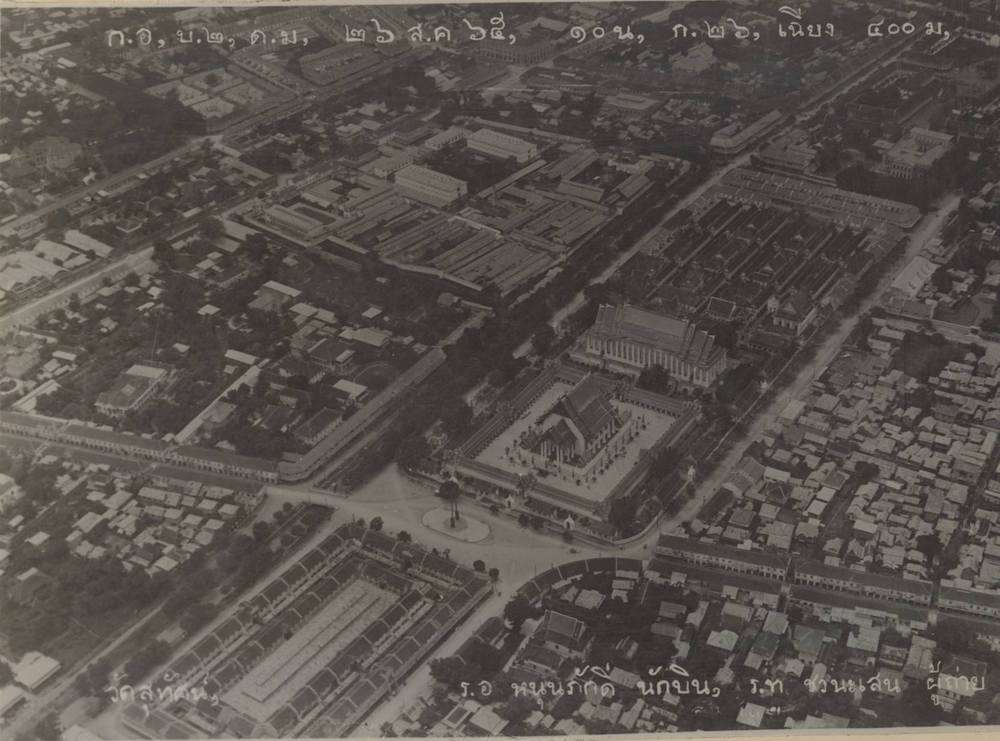 Wat Sutat and the Giant Swing in 1921. Courtesy Steve Darke

This one shows the Hualampong Railway Station that had been opened five years earlier, on June 25, 1916. Flying officer Chuwanasen took this photo on August 17, 2465 (1921) at 10 o’clock in the morning at an altitude of 400 meters. The pilot was flight lieutenant Noonphakdee. Right opposite the entrance of the station is the station of the Paknam Railway.

Next to the station, we see the Padung Krung Kasem canal with the Charoensawas bridge 36 (สะพานเจริญสวัสดิ์ 36) with its characteristic pillars. Also visible is the July 22 roundabout (วงเวียนยี่สิบสองกรกฎาคม) at the top left of the picture. On July 17, 1917, Thailand entered World War One by declaring war on Germany and Austria-Hungary. Thanks to Steve Darke, Naruemon Nai, and Dick van der Spek. 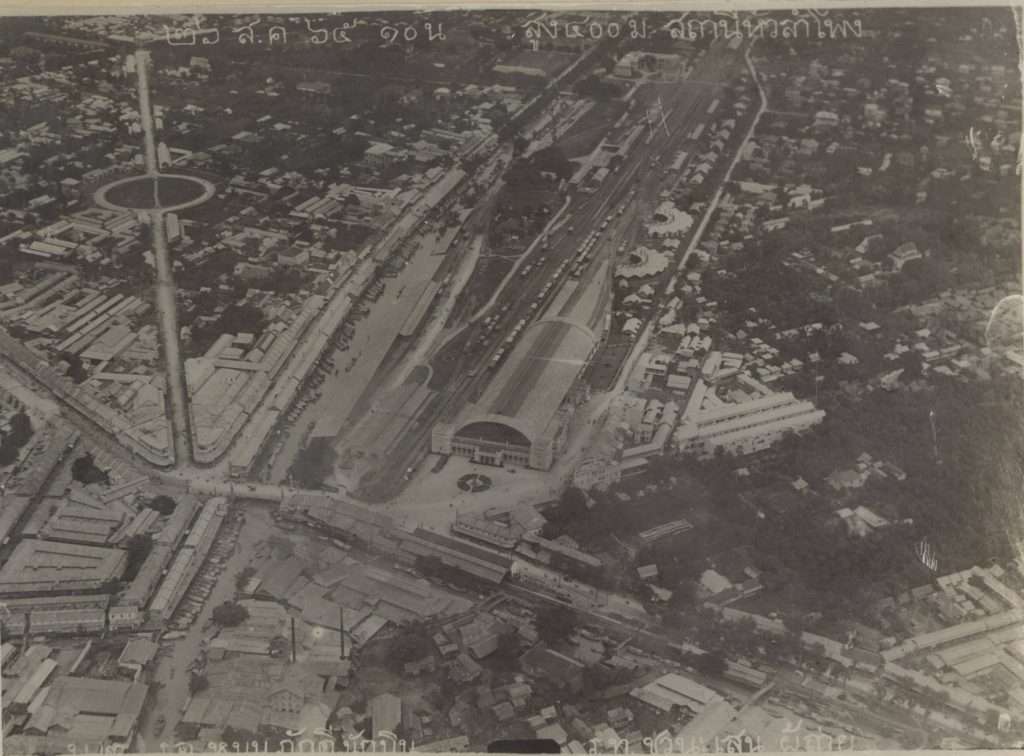 This image has no information written on it. I suppose it also dates back to 1921 as it is in the same collection as the other photos. It shows the Phaya Thai Palace or Phya Thai Palace (วังพญาไท) which is located on Rajavithee Road. The Samsen Canal runs at the back of the compound. The Palace was built during the reign of King Rama V (Chulalongkorn) in 1909. He lived there with Queen Saowabha until he passed away on 23 October 1910, only a few months after the palace’s official inauguration. Queen Saowabha lived there until she passed away in 1919. King Rama VI apparently pulled down most of the buildings and constructed a new royal residence on the site. I think this is the building we are looking at in this picture. It served briefly as a hotel and is now the clinic for the Royal Thai Army. 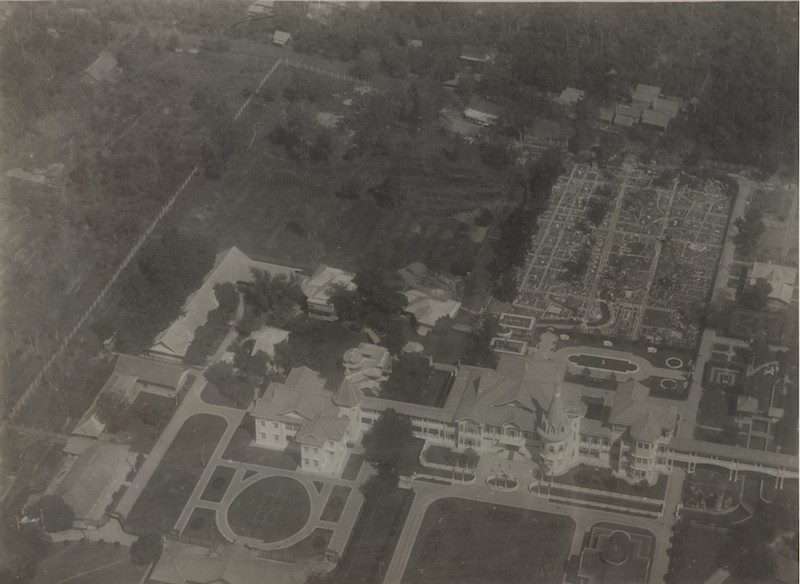 Wat Arun, the Temple of Dawn

This last image shows Wat Arun (วัดอรุณราชวราราม), the temple of Dawn on the Chao Phraya River. It was taken on August 17, 2465 (1921) at 10 o’clock in the morning at an altitude of 400 meters. The pilot was flight lieutenant Noonphakdee. The photographer of this image was flying officer Thattanon (ทัตตานนท์). 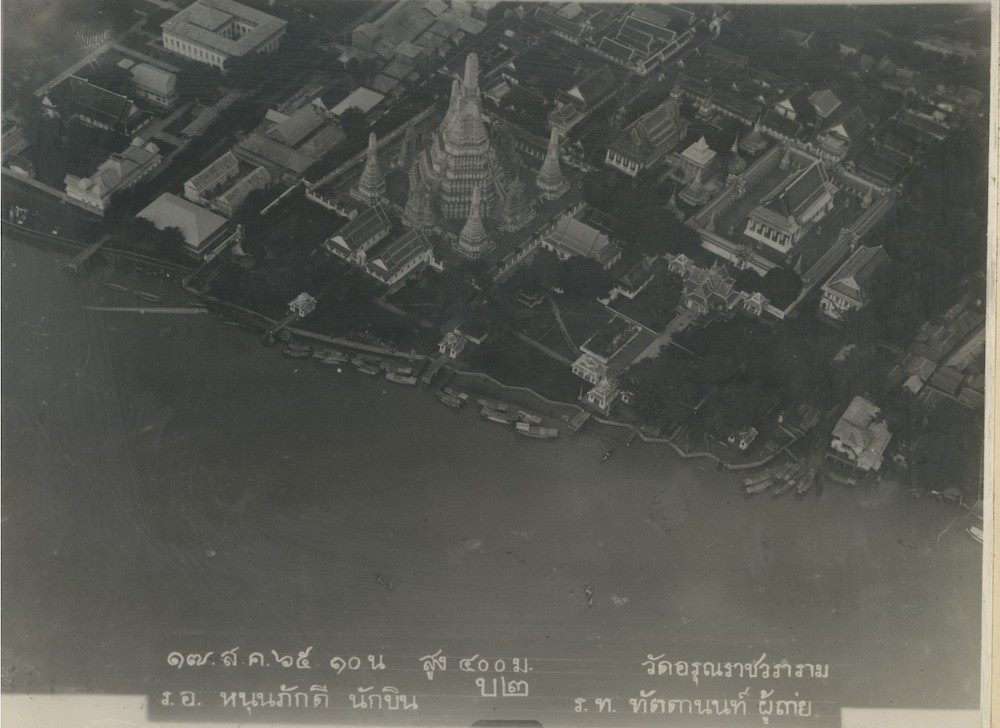 Wat Arun, the Temple of Dawn

Many people are probably familiar with the Williams-Hunt Collection of aerial photographs or at least have seen some images from this great collection. Peter Darell Rider Williams-Hunt (1919-1953) served as an aerial photographic interpreter with the British Army during World War Two. From his childhood days onward he had a keen interest in archaeology and geography.

After the war, he worked in several places in Southeast Asia before he became an advisor to the Orang Asli, the indigenous people of Malaysia. There he died from injuries sustained in a tragic accident in 1953. During his short career, Williams-Hunt had collected more than 5000 aerial photographs of Malaysia, Singapore, Myanmar, Thailand, Cambodia, and miscellaneous areas of Vietnam during his postings to Southeast Asia. 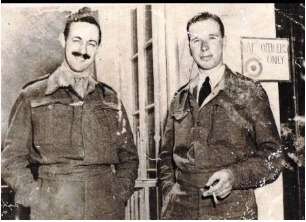 P.D.R.Williams-Hunt with his friend Tony Beamish (after Jungle Nurse 1960) 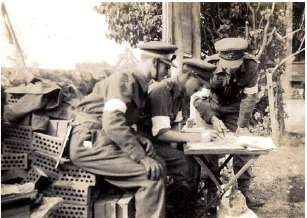 P.D.R. Williams-Hunt during the Emergency in Malaya (after Jungle Nurse 1960)

To make a long story short: many of these images now appear on a website called the Geo-Spatial Digital Archive Project (GDAP). The images are either vertical views (like a Google map) or oblique views, in which you see structures and landscapes. Most of the pictures were taken during or just after World War Two.

There are a lot of images of Chiang Mai, Lampang, Lamphun, and other places in North Thailand. Most of them are vertical views. There are also oblique view images from places such as Bangkok, Ayutthaya, Phitsanulok, and Angkor, Cambodia. You can spend hours going through all these amazing pictures, which is what I have done. Below photographs are from Chiang Mai, April 3, 1944. There are many more on the Geo-Spatial Digital Archive Project. 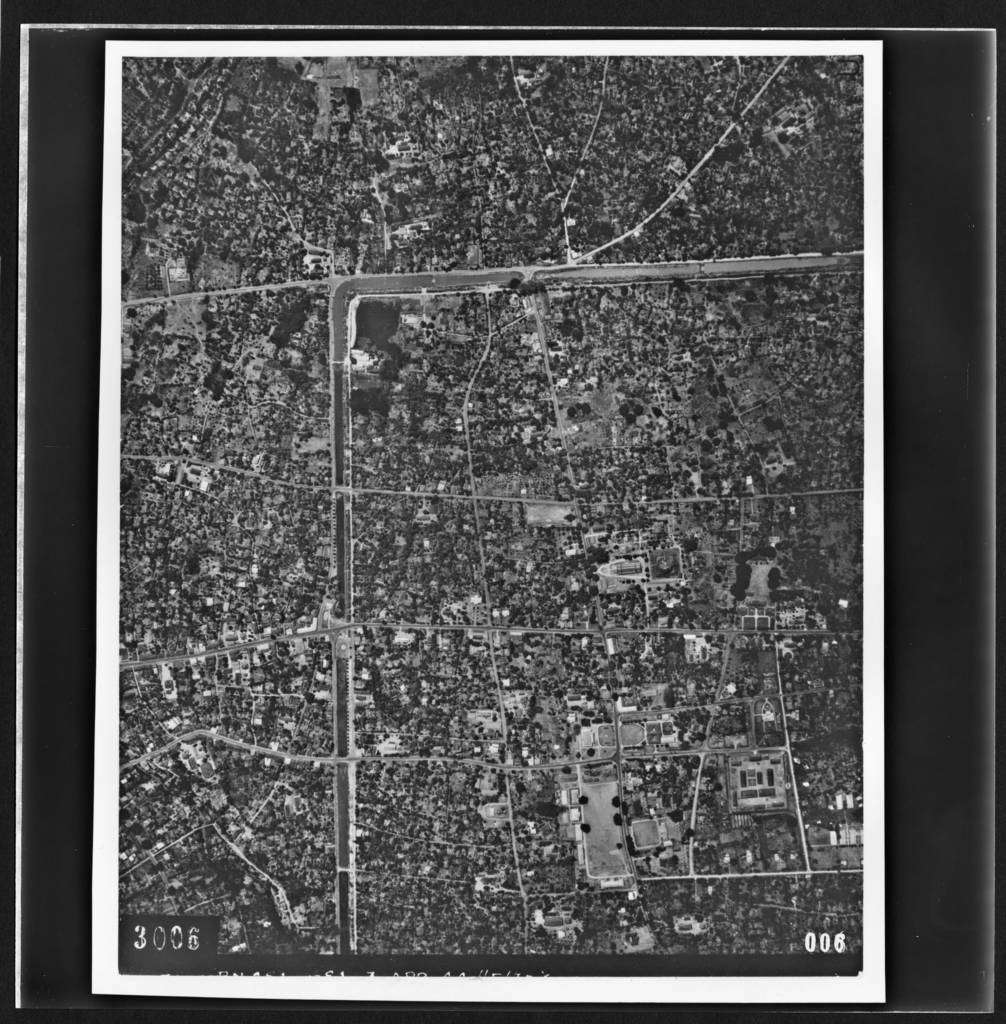 The Katam corner of the old city 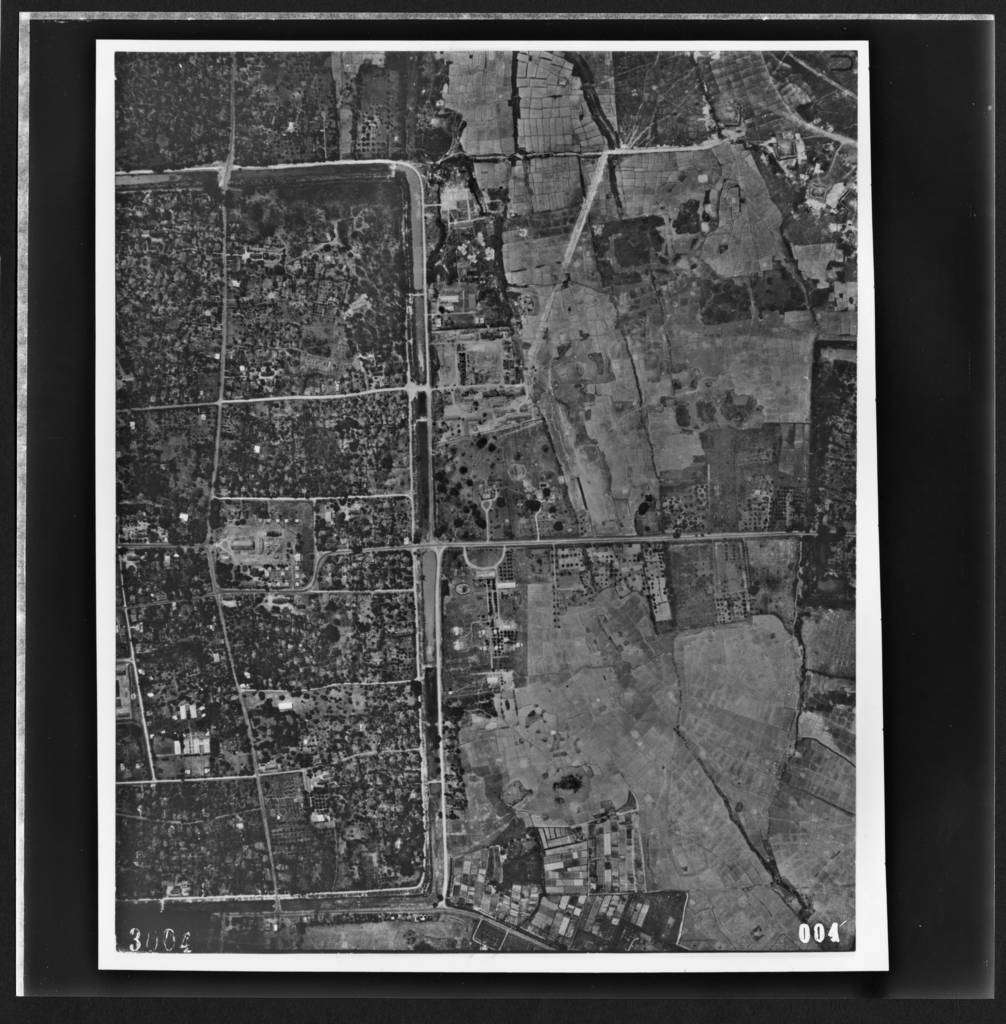 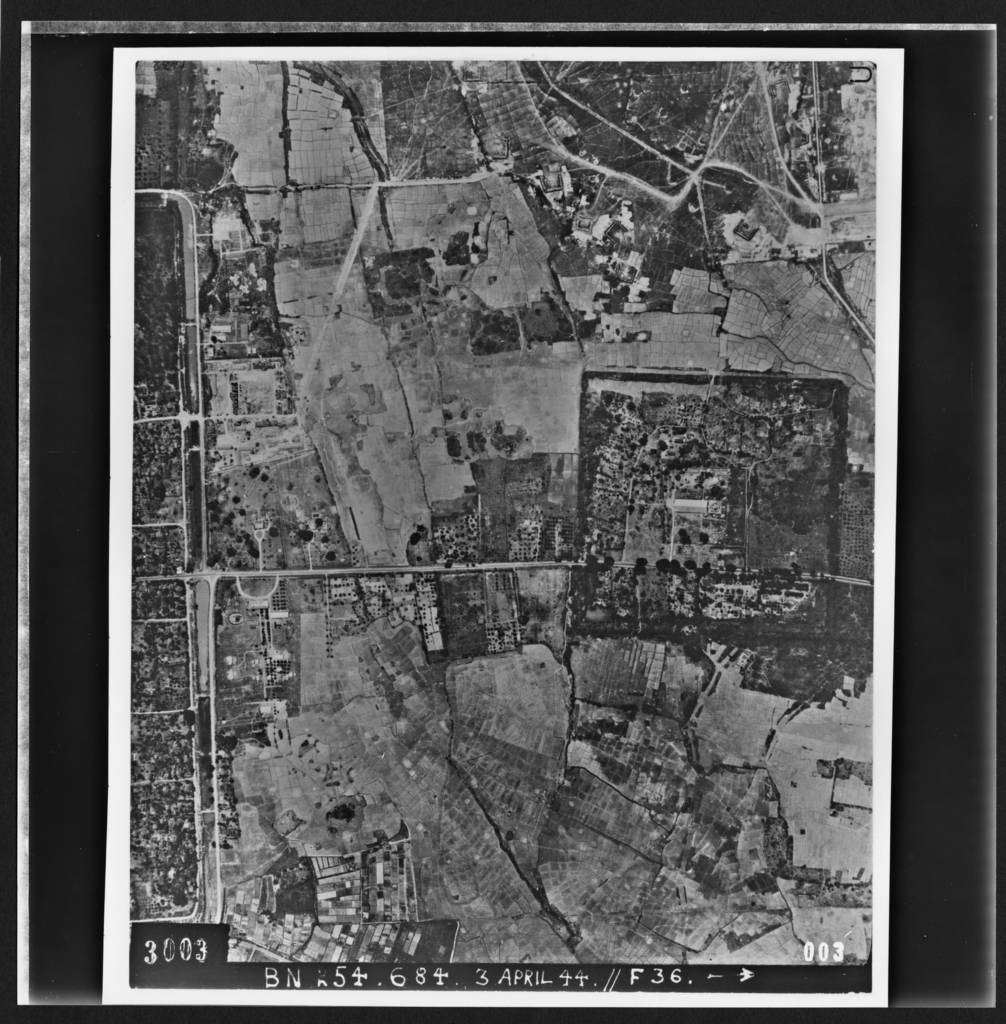 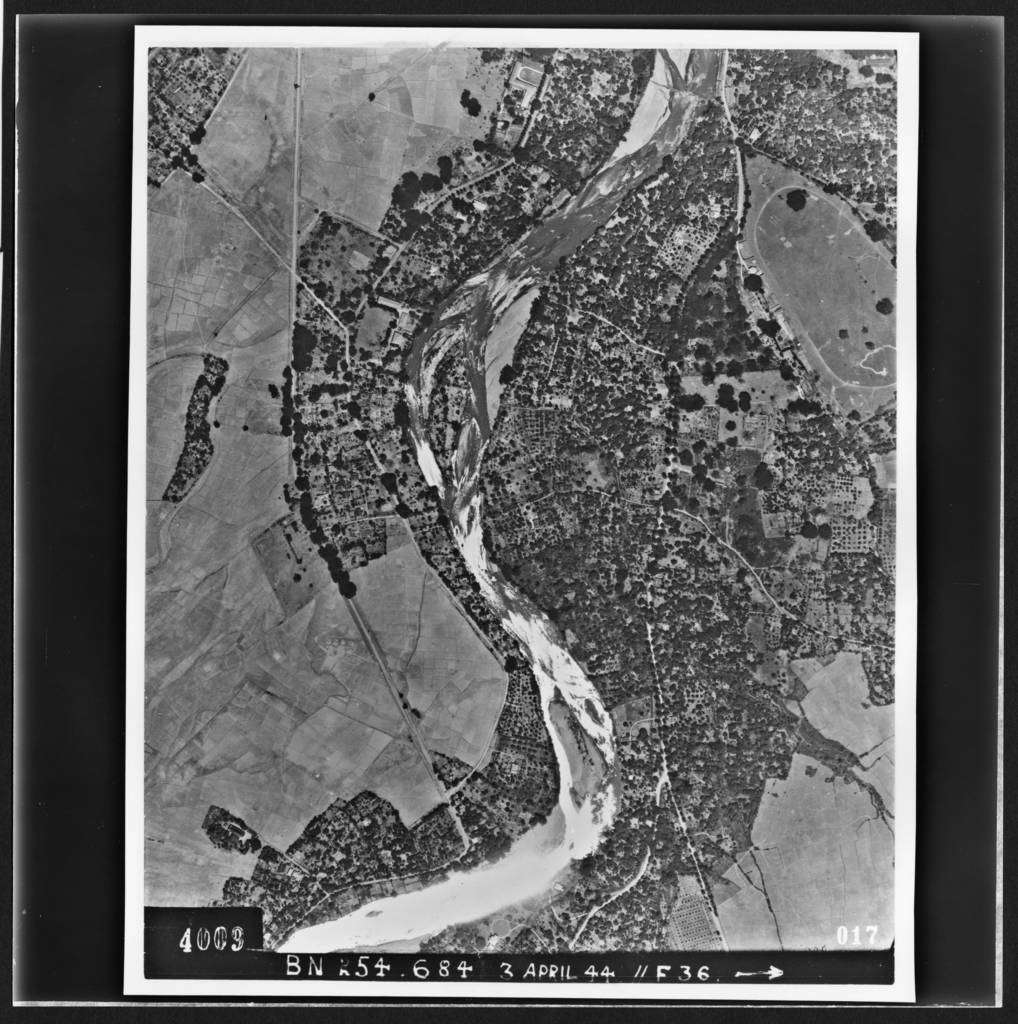 The photographic reconnaissance of North Thailand

I have done some more research on the Williams-Hunt archive of aerial photography in Thailand. I think converted De Havilland Mosquito bombers of the No.681 squadron of the British RAF (Royal Air Force), based in Calcutta, British India, carried out the photographic reconnaissance of North Thailand, and Chiang Mai, during World War Two. This squadron used Spitfires to fly photographic reconnaissance sorties over Burma but North Thailand was out of range of the Spitfire. In August 1943 the squadron was allotted two Mosquitos that were capable to fly to Thailand and back to Calcutta.
Below are some oblique images of Bangkok dating back to 1946. There are a LOT more on the Geospatial website. 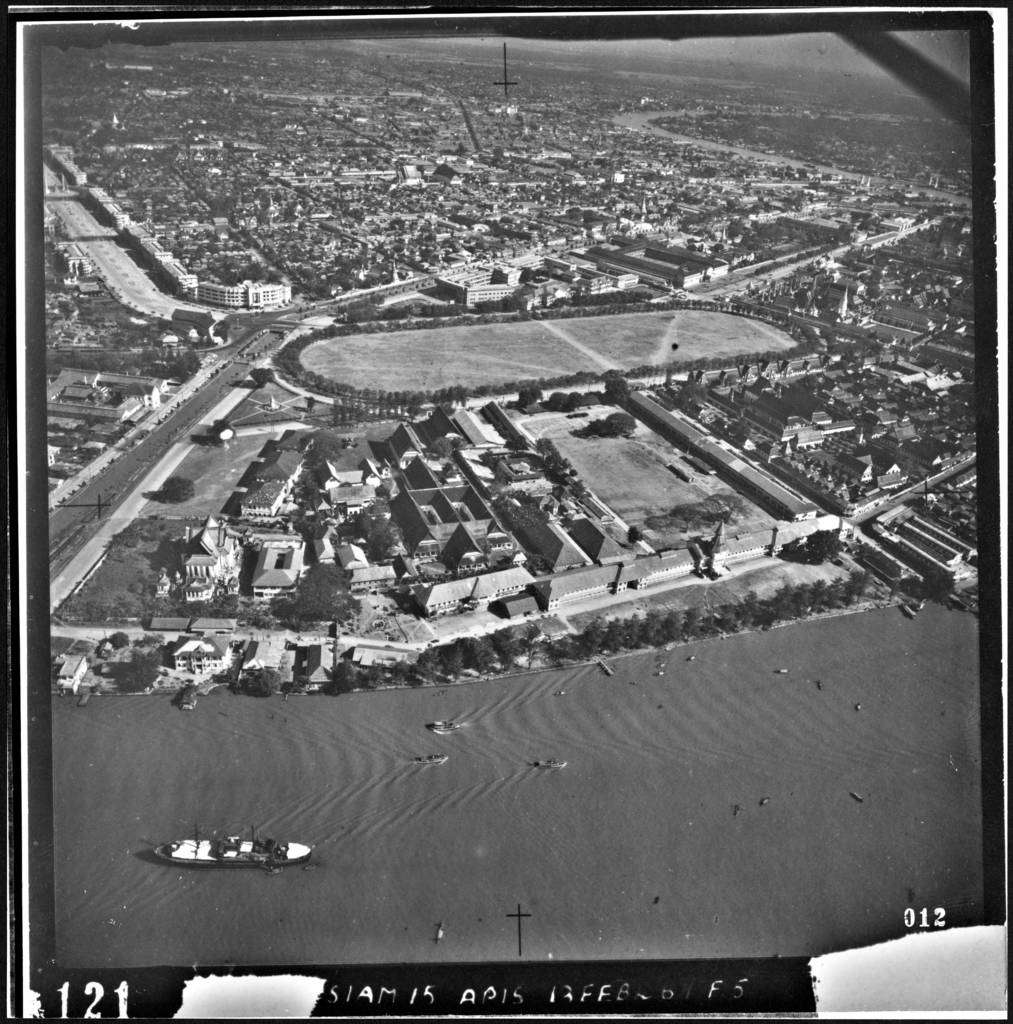 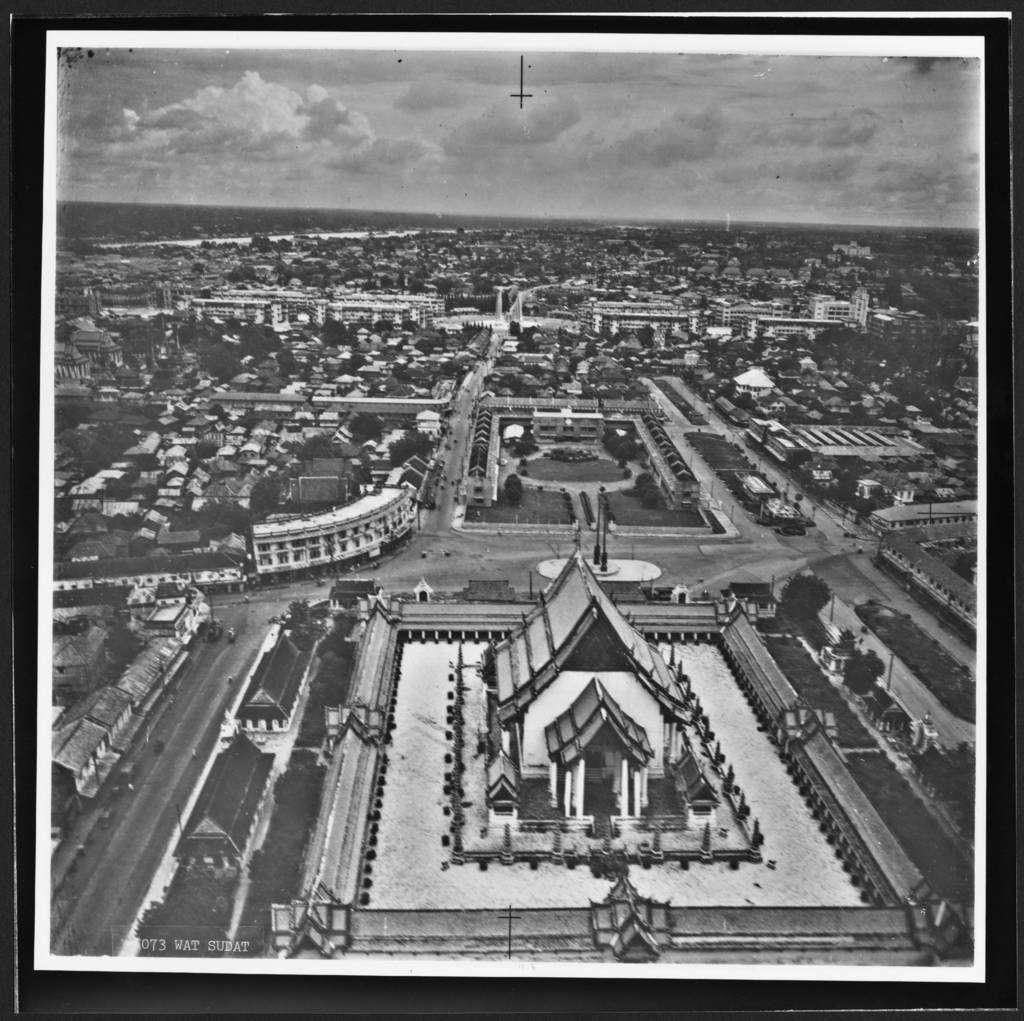 Wat Sutat and the Giant Swing 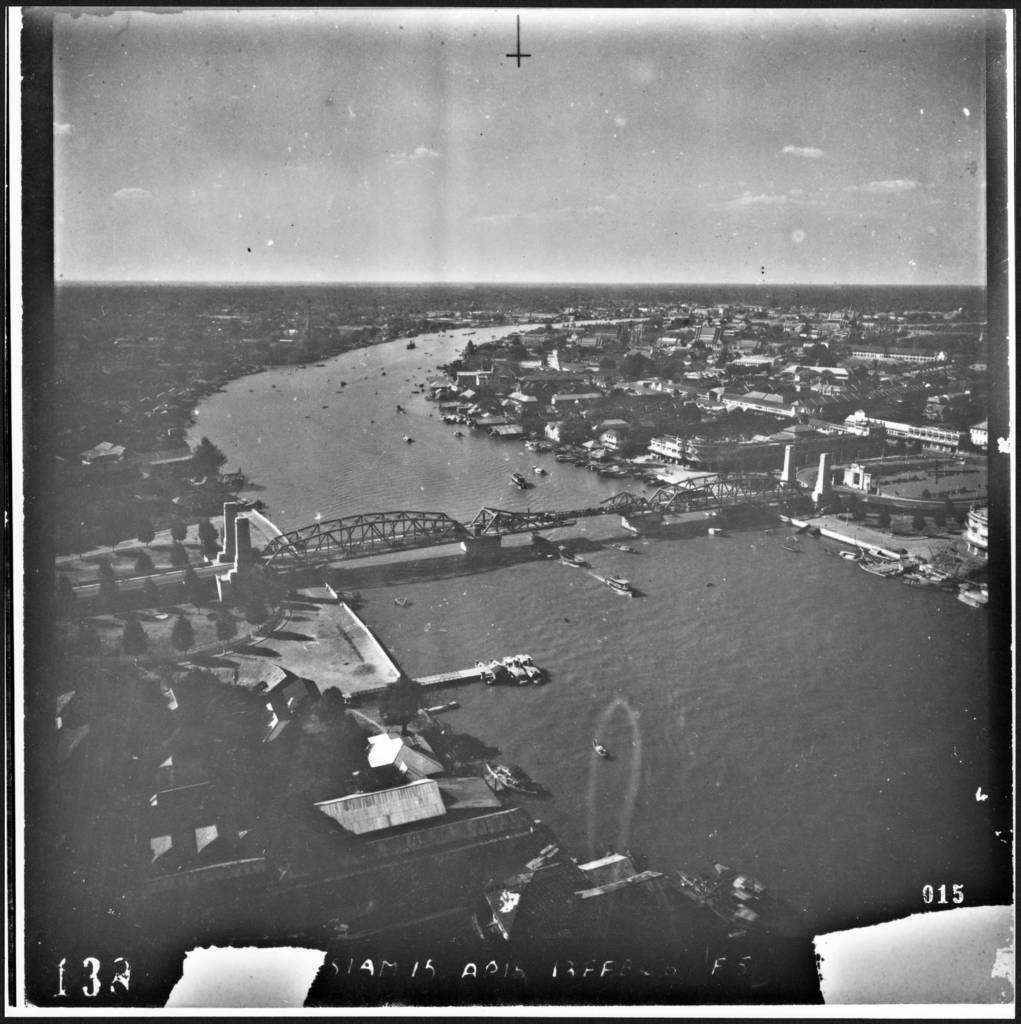 The Cameras of Aerial photography in Thailand

The RAF installed three cameras in the bomb bay. The cameras were probably the F24 and F52 cameras, produced by the British Williamson Manufacturing Company Ltd. Most of the pictures of North Thailand were taken in March or April 1944. I just guess that the RAF wanted to have photos of the airport and other strategic objects such as bridges. The US Airforce already had destroyed the Chiang Mai Railway Station on December 23, 1943. The oblique view images were taken after the war from different aircraft with hand-held cameras. 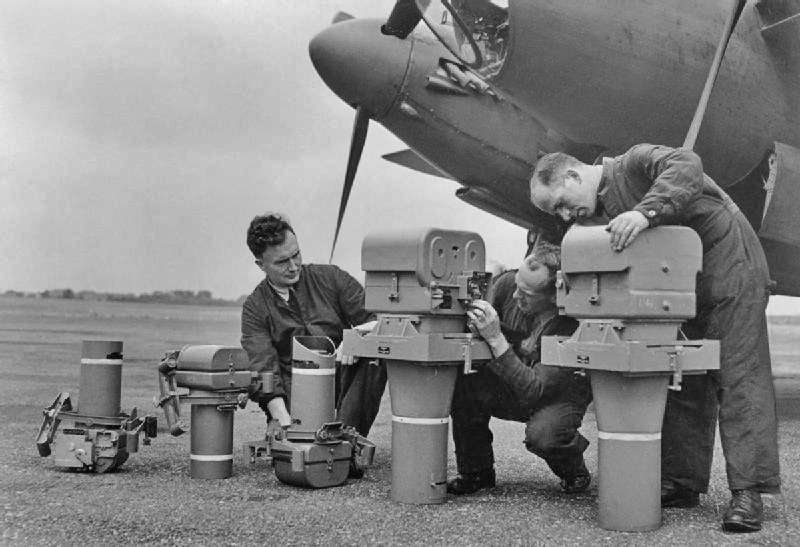 The fascinating views of Ayutthaya

Some of the most fascinating pictures are the oblique view images of the ruined city of Ayutthaya. Burmese armies conquered and destroyed the second capital of the Kingdom of Siam in 1767. Looking at the photos someone took from a small plane in 1946, 179 years later, not much seems to have changed. It seems few people lived in the ruined city. UNESCO inscribed the city of Ayutthaya on its list of World Heritage Sites in 1991. I visited Ayutthaya for the first time in 1990. My last visit was in 2014. 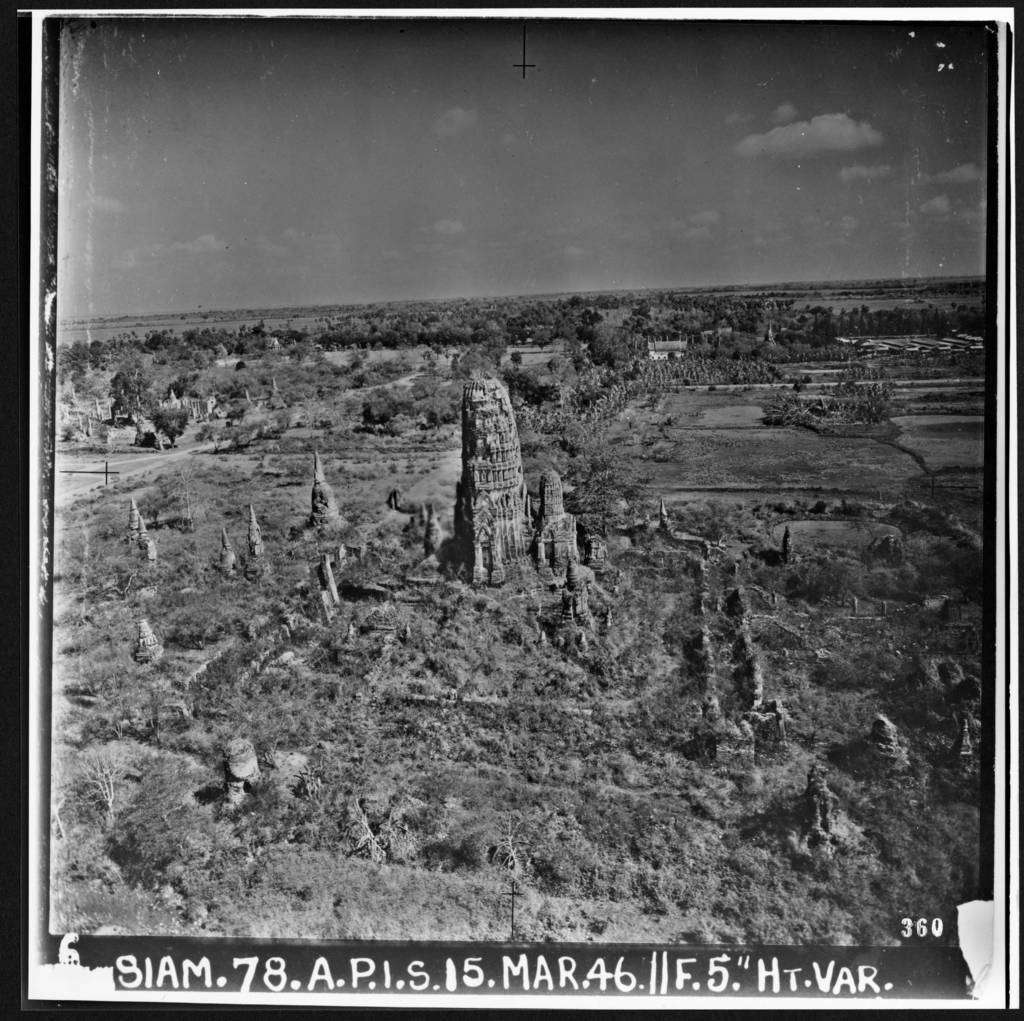 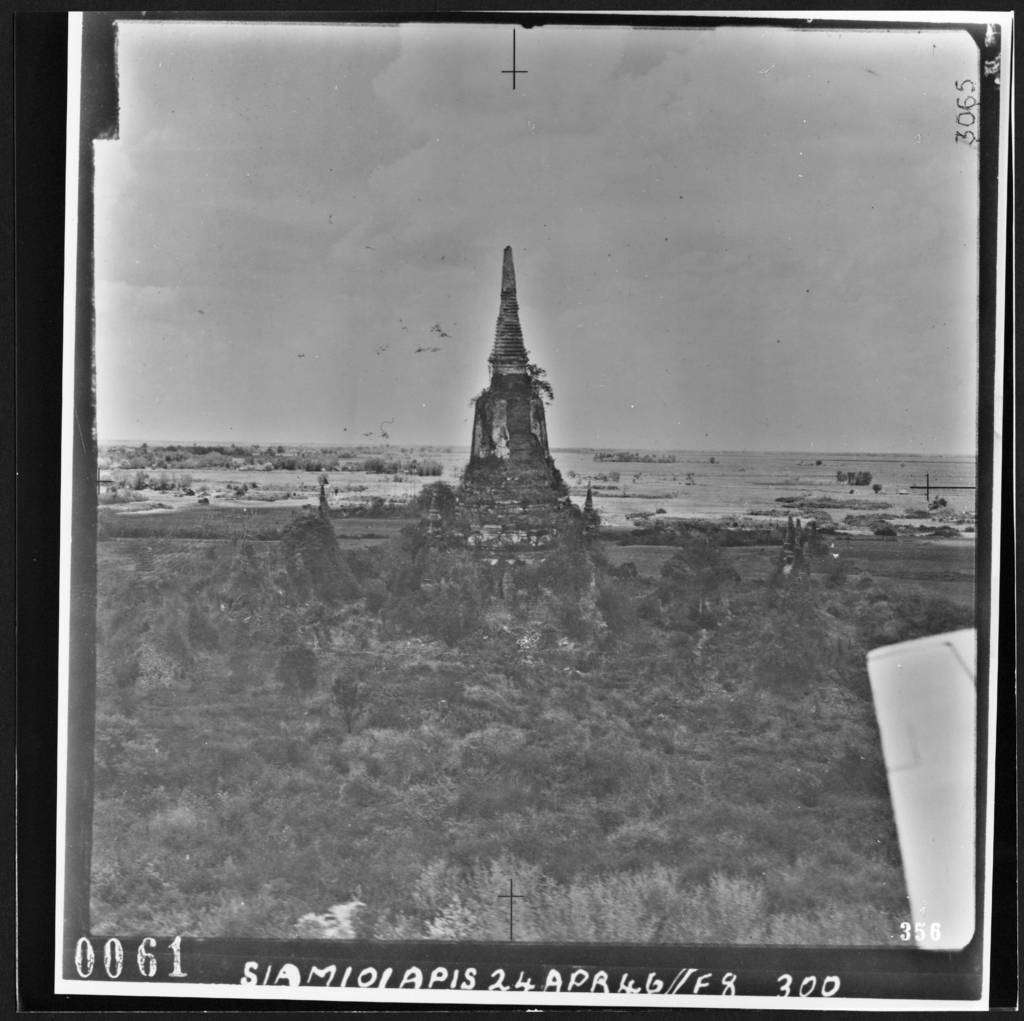 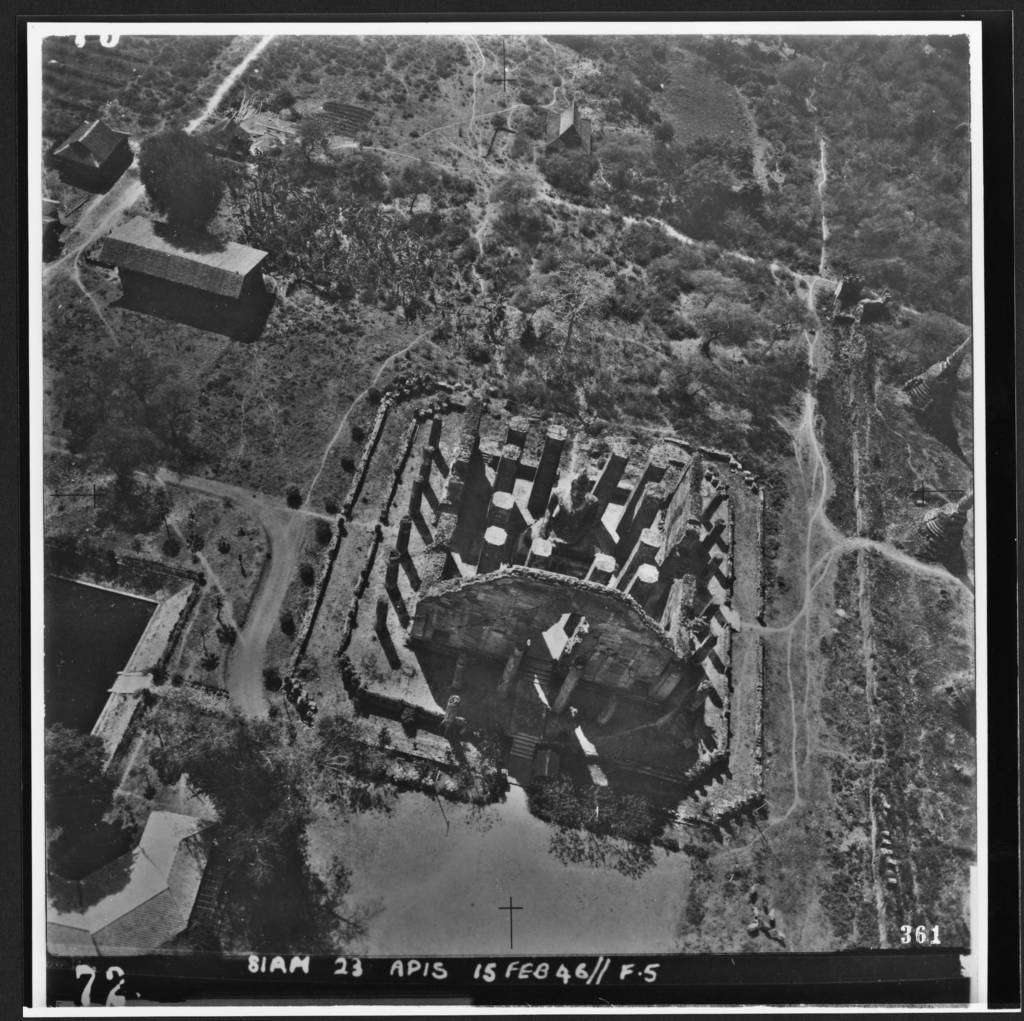 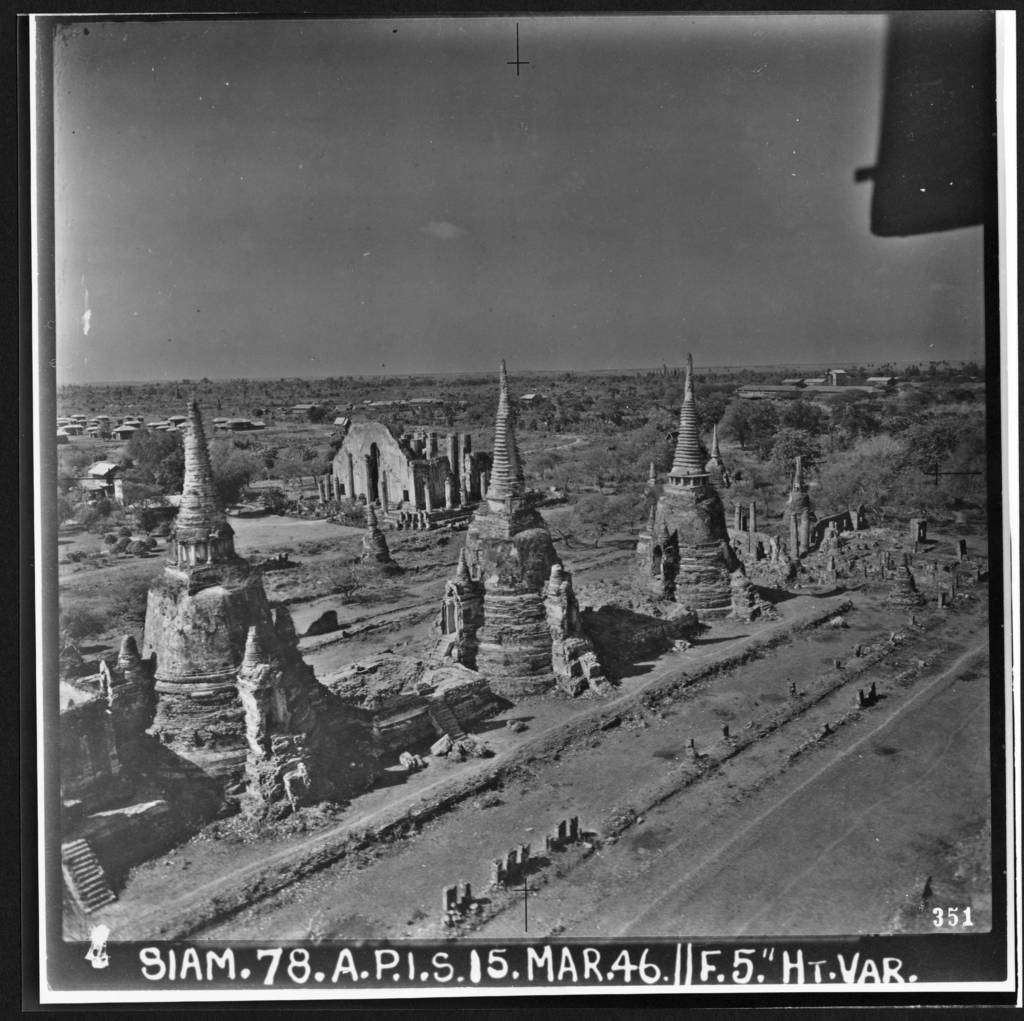 References for this article

Elizabeth Moore: The Williams-Hunt Collection Aerial photographs and cultural landscapes in Malaysia and Southeast Asia, in Sari – International Journal of the Malay World and Civilisation 27(2) (2009)