Songkran Festival Then and Now (1)

Who doesn’t like old pictures of Chiang Mai? Of the Songkran festival (in Thai: ประเพณีสงกรานต์) there are many pictures to be found online but what story do they tell? Most of the black and white pictures were made by photographer Boonserm Satrabhaya. Many of his pictures can be found online on a website of the Chiang Mai University Library.  I met Boonserm twice at his small house that was located between the railway station and the superhighway. Boonserm is now unfortunately in poor health and moved to a nursing home. His pictures show the Chiang Mai of yesteryear.

What can we learn from his pictures of the Songkran festival of yesteryear?

First of all there were no or hardly any tourists. The foreigners who appear on some pictures from the 50’s and 60’s  appear to be residents.

There were no plastic pipes or water guns. It was all small buckets, bowls or cups.

There were very few vehicles.

At least until 1968 the Songkran festivities and rituals took place in and near the Ping River. In those days the Ping River almost fell dry in April. An aerial picture of Chiang Mai taken in early april 1944 by Allied planes shows large islands in the Ping River. 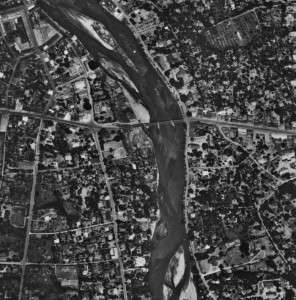 A map of 1945 of the Thapae/Ping River area also shows an island in the Ping River, north of the Nawarat Bridge. This map also shows the old Governor’s Residence and the Burmese Upakut Mon Temple that was demolished in 1965. At this location is now the Buddhasathan building. 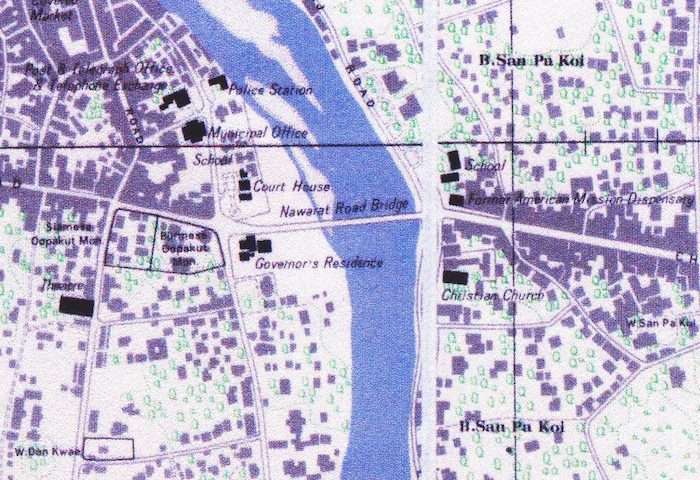 Thapae Road/Ping River. Map Chiengmai 1945. Map given to me by Oliver Backhouse and enhanced by Hak Hakanson.

All the songkran action took place in Thapae road and in the Ping River. Major Roy Hudson told me that Thapae Road was the main street of Chiang Mai in the 60’s. During the Songkran festivities you could walk down the street. You got wet but it was all very gentle and respectful. The pictures do show that. There were very few cars in those days. Songkran was a walking affair. Quite a few pictures show people standing in the river. 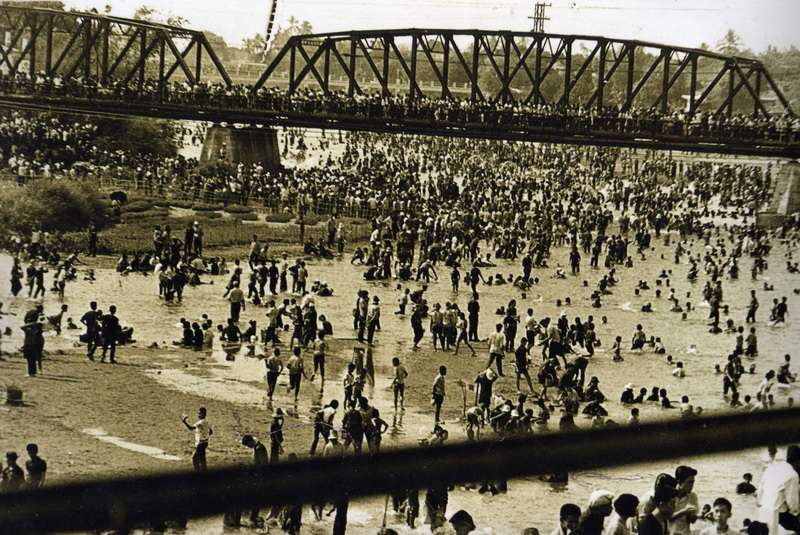 Songkran Ping River showing the steel truss Nawarat Bridge that was replaced by the current concrete bridge. In the background the Chansom Memorial Footbridge connecting the Wat Ket area with the Warorot and Tonlamyai markets. Picture by Boonserm Satrabhaya.

This is the last picture I have showing Songkran revellers in the Ping River. It was taken in 1968. We are trying to find out in which year the festivities from the Ping River to the moat area. The increase of the numbers of cars must have played a part in that as well as the human activities upstream in the Ping River that influenced the water level in the river. 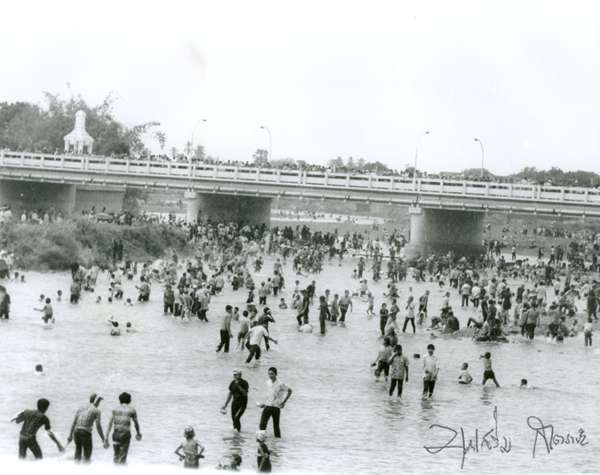 Ping River showing the new Nawarat Bridge that was opened in 1966. Picture by Boonserm Satrabhaya. 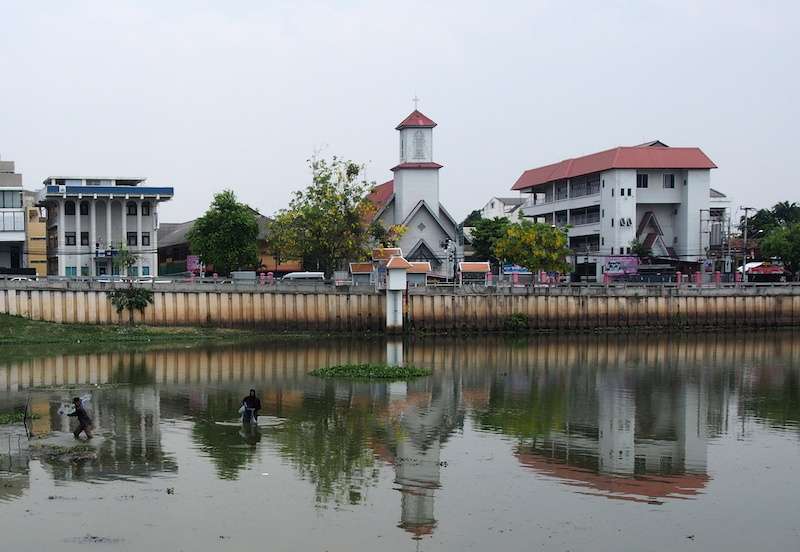 This picture I took on April 6, 2016. Water level is very low and Songkran festivities would be possible again in the river……

Below picture shows the Burmese Wat Upakut Temple which was next to the Thai Wat Upakut which is still there. At this location is now the Buddha Sathan building on the corner of Thapae Road and Charoenprathat Road. 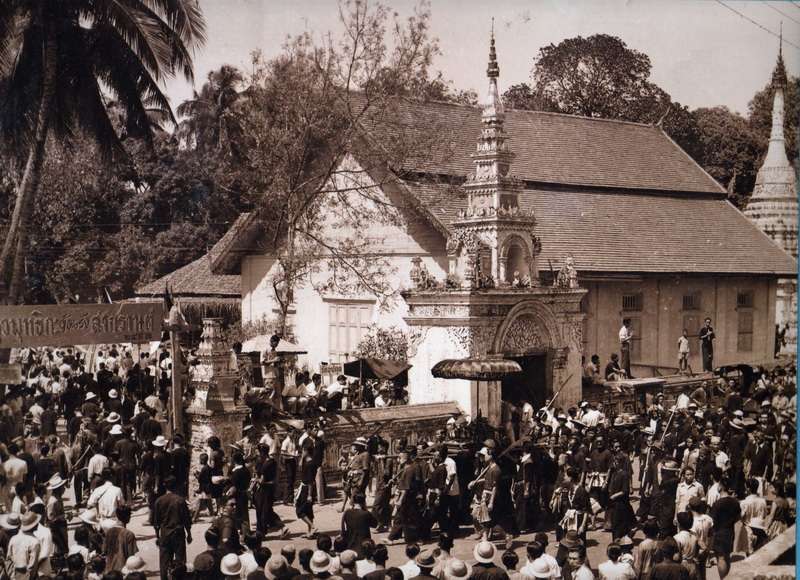 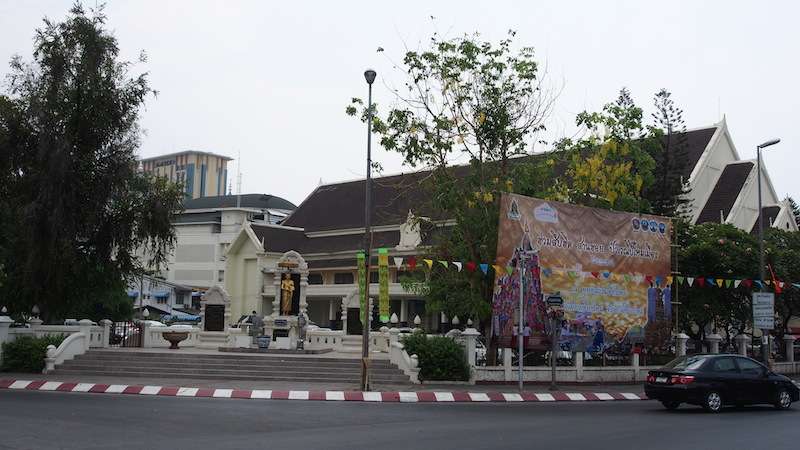 The same corner where once was the Burmese Upakut temple and where now is the Buddha Sathan building. Picture was taken on April 6, 2016, by Frans Betgem

Below picture shows the steel-truss Nawarat Bridge with the First Christian Church in the background. On the right hand side is the old Governor’s Residence that also appears on the map of 1945.  This picture was taken from the corner of Praisanee and Thapae roads in 1953. 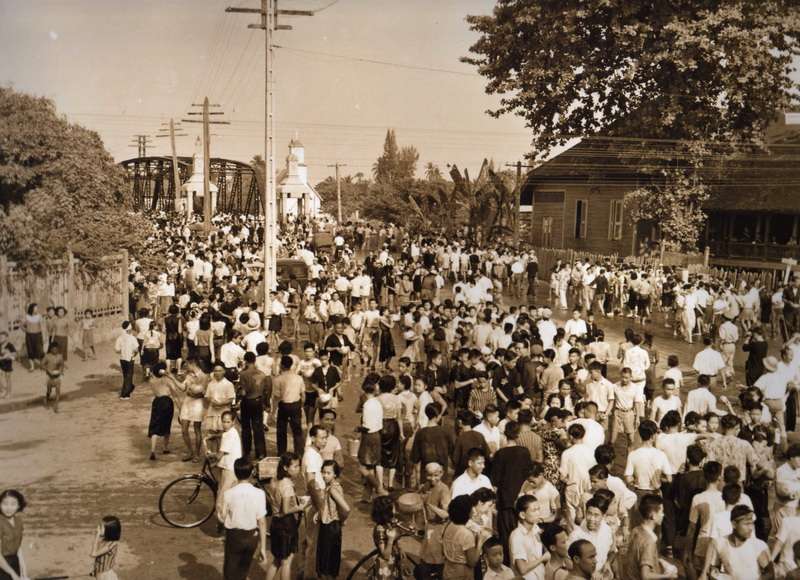 This is how this location looks today. The steel truss Nawarat bridge made way for the concrete one in 1966. The church is not visible anymore through the foliage and the new Governor’s Residence on the right is further back from the main road nowadays. 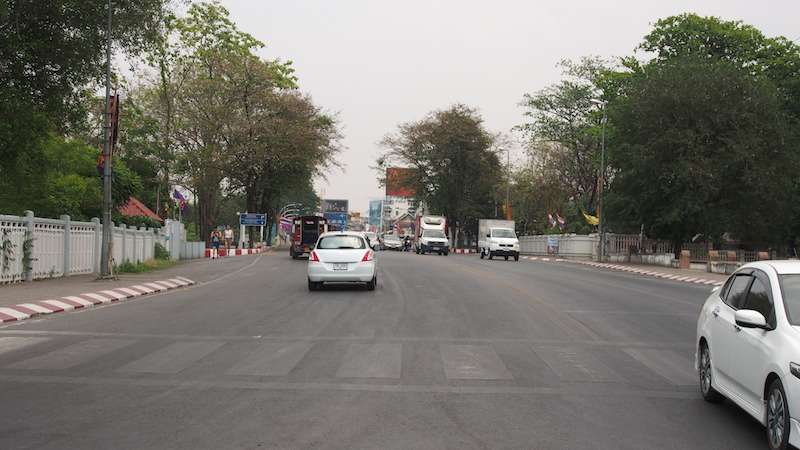 Here is a collage of some of Boonserm’s pictures that show the civilized side of the Songkran Festival in the old days: 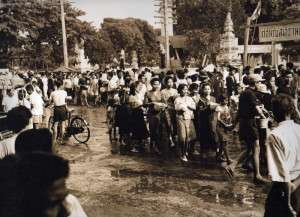 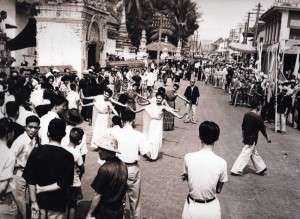 In front of Wat Upakut 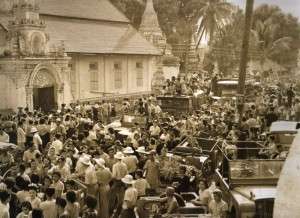 The Burmese Wat Upakut that was demolished in 1954 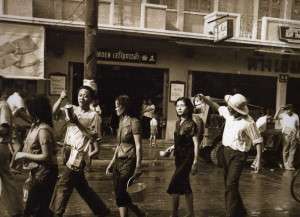 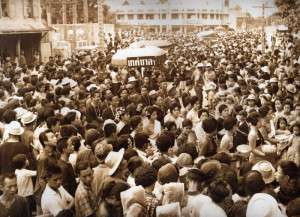 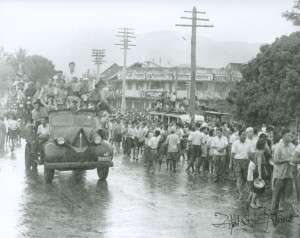 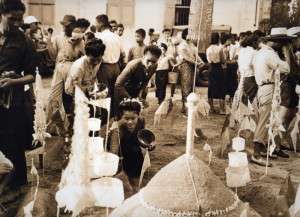 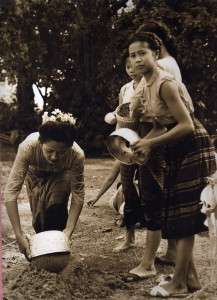 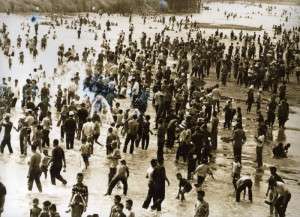 Fun in the Ping River 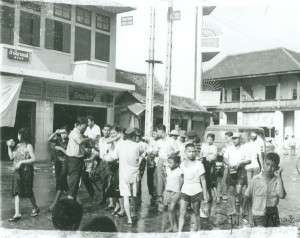 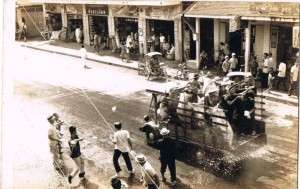 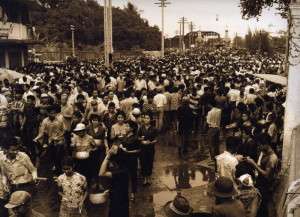 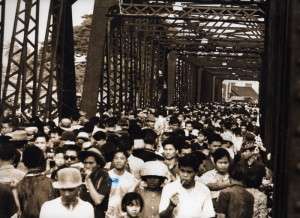