Reconstruction of a Chiang Mai Landmark

History of the bridges over the Ping River

The Chansom Memorial Bridge, one of the landmarks of Chiang Mai, has been reconstructed. Opening of the new bridge took place on Sunday, August 14, 2016. The first bridge on this location was the Khua Kula bridge that collapsed in 1932. Between 1932 and 1966 there was at times a bamboo bridge and sometimes no bridge at all. In 1965  Motiram (Montri) Koslaphirom, a businessman of Indian or Pakistani descent, financed the construction of the Chansom Memorial Bridge, a footbridge, in the memory of his deceased wife who was called Chansom Khoslaphirom. The bridge was opened in 1966. 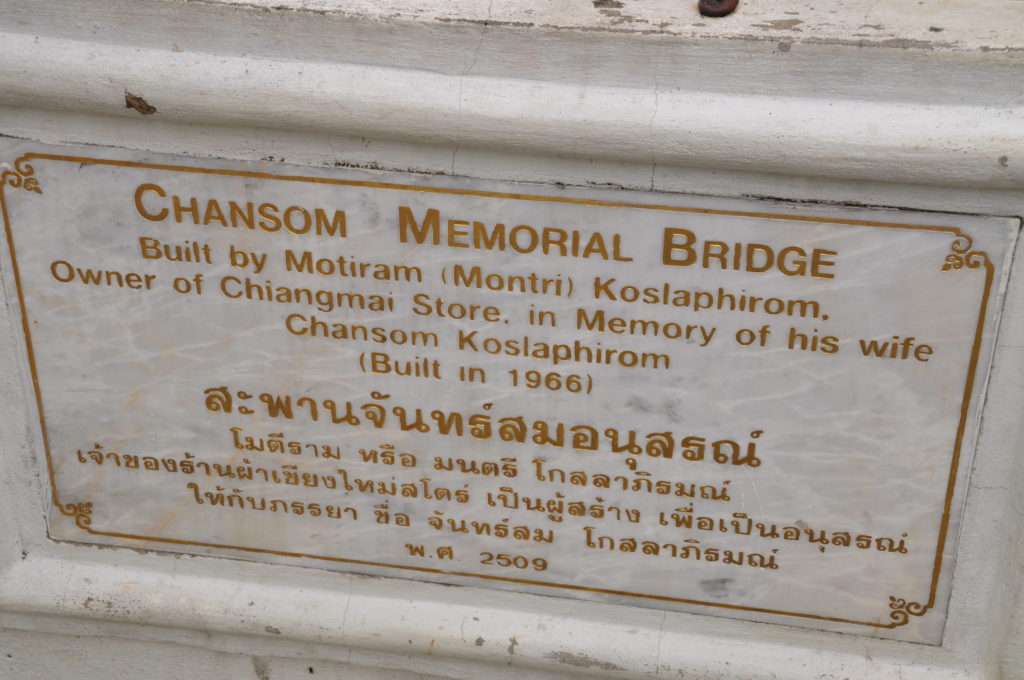 Plaque on the first footbridge.

In September 2011 the Ping River broke its banks. Floodwaters damaged the Chansom Anusorn Bridge beyond repair. The City Council put up a barrier blocking the entrance of the bridge on the Kad Luang side. A sign stated that the bridge was unstable. According to City News Chiang Mai the foundation of the bridge had collapsed. The bridge was temporarily closed. I was just in time to take a number of pictures of the old bridge. I took below pictures on September 9, 2012. 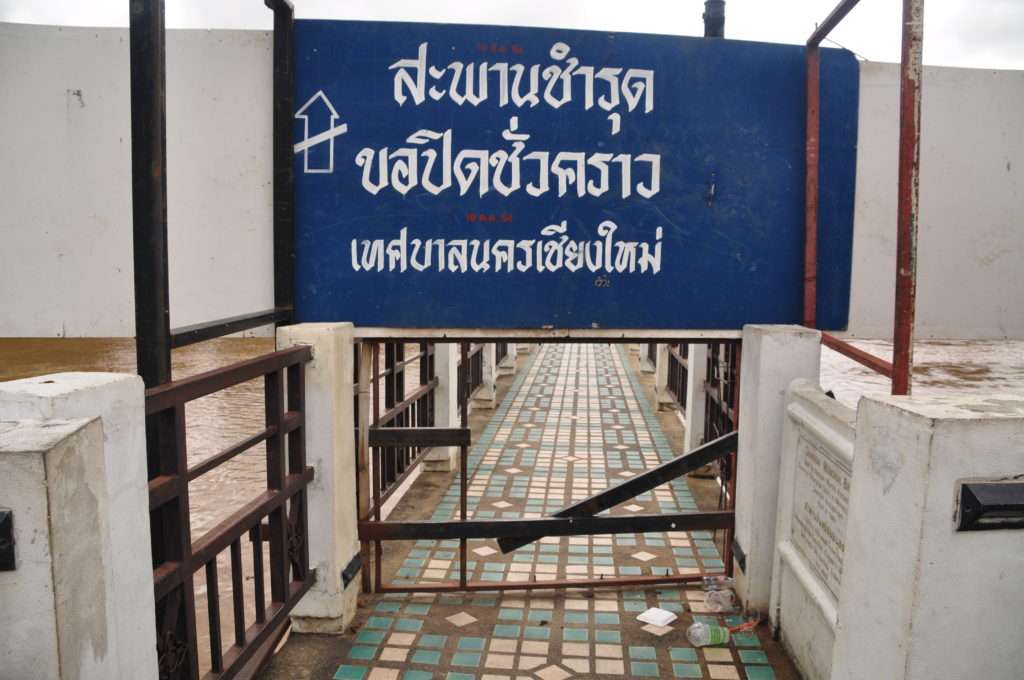 Sign from the Chiang Mai City Council blocking the entrance of the footbridge at the Kad Luang side of the bridge. 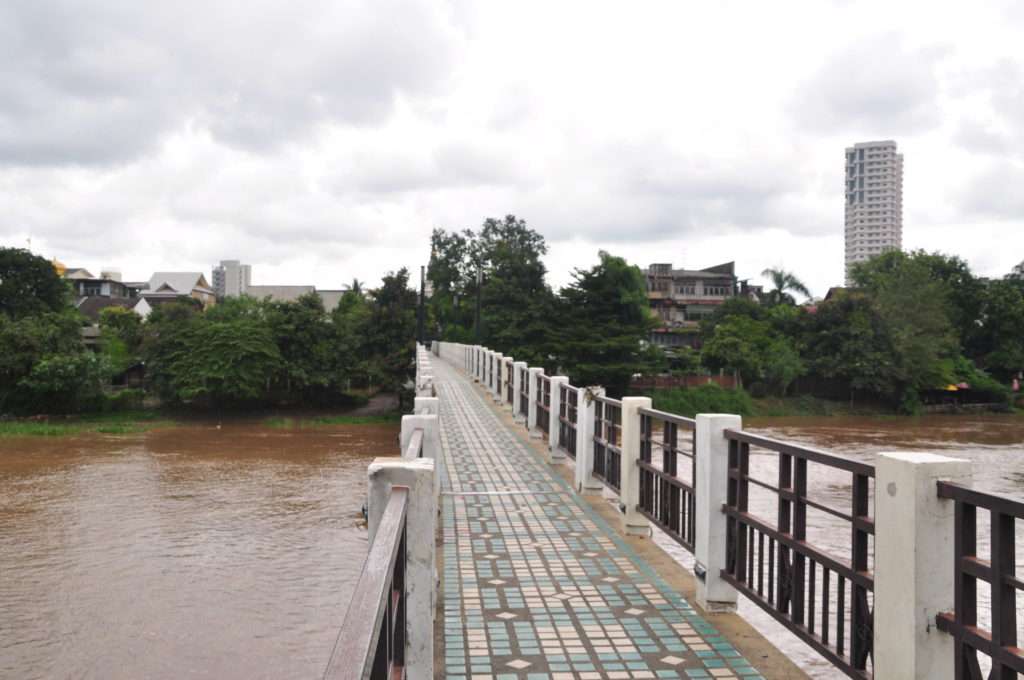 Crossing the bridge at my own risk…..Looking towards the Wat Ket side. 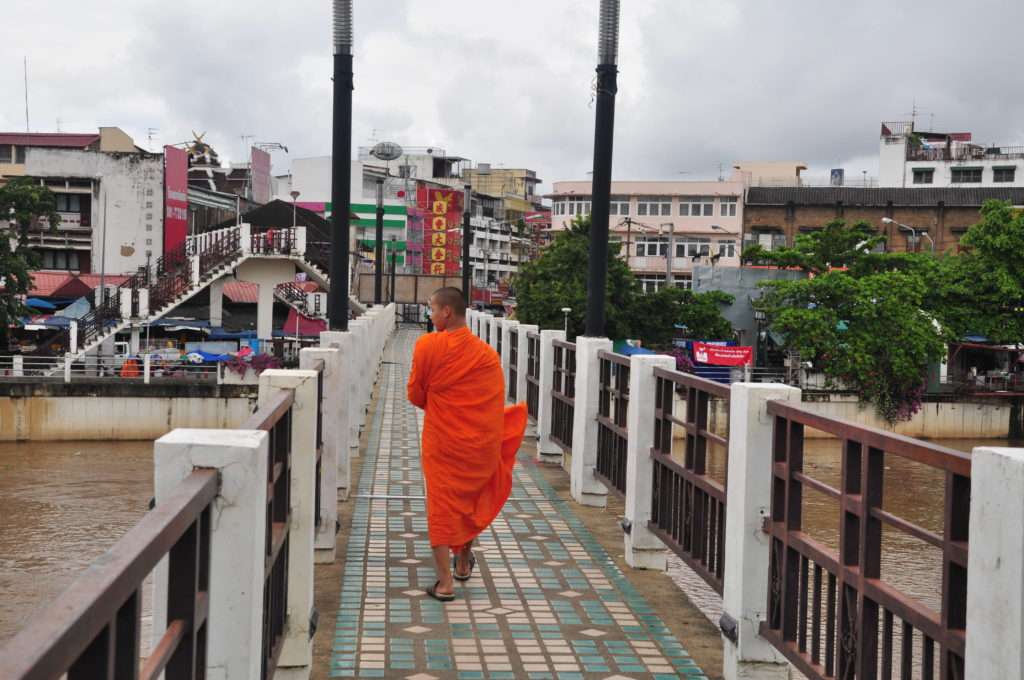 Monks were still using the bridge 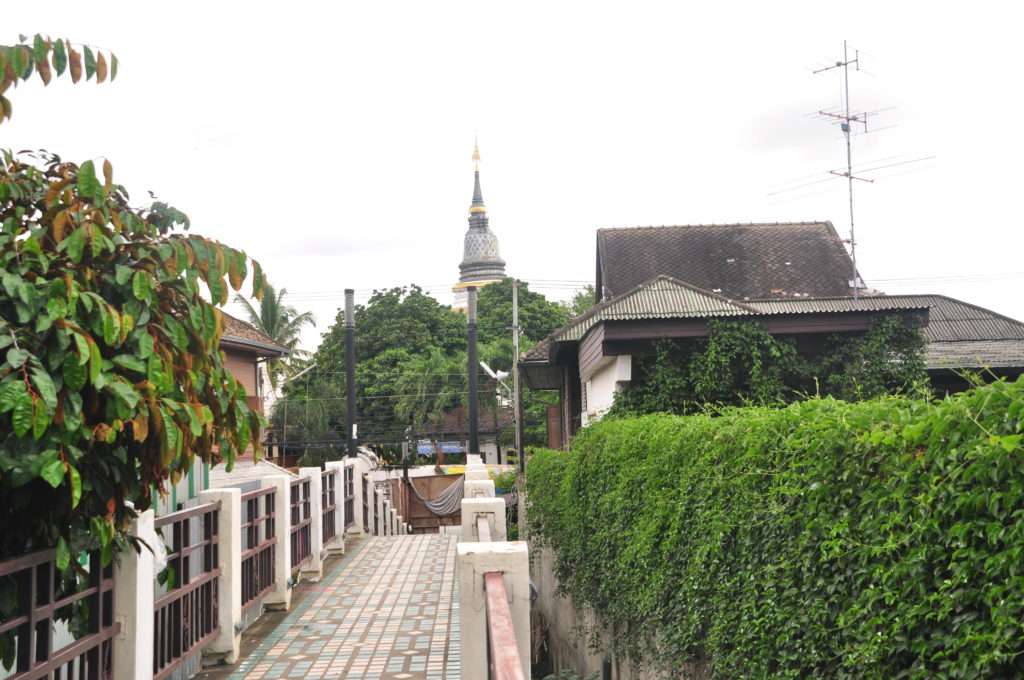 The entrance at the Wat Ket side was also blocked. 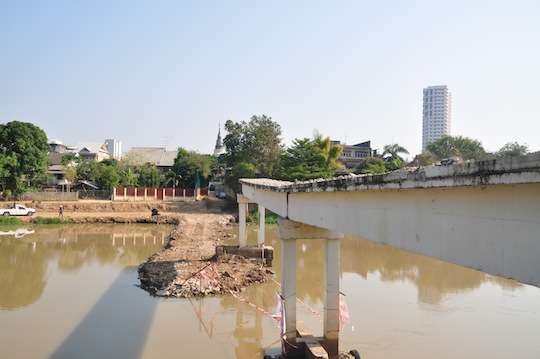 Demolition of the bridge under way, January 2013. 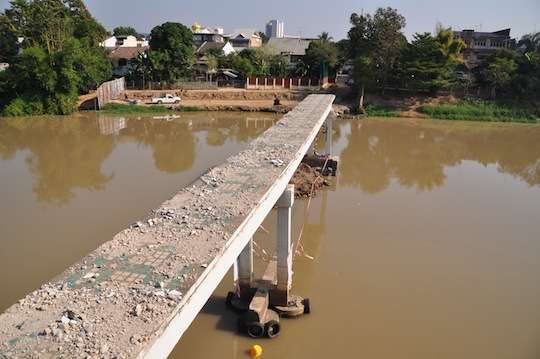 A banner on the bridge announced the reconstruction of the bridge that was going to be 3 meters wide and 110 meters long. The construction contract started on September 8, 2012. The project was to be finalized in 360 days on September 2, 2013. It was not to be…..Budget was 8,730,000 Thai Baht.

When I took my pictures on September 9, 2012, no one was working on the bridge.

Coverage of the media doesn’t correspond always with my own timeline….Nopniwat Krailerng wrote this in the Chiang Mai Mail edition of May 19-June 1, 2013

“The Chansom Memorial Bridge- the foot bridge near Waroros Market, will be torn down and rebuilt at the cost of 8.73 million baht, construction is expected to take around a year. Construction was scheduled for 2011 – 2012 but flooding delayed the start. Approval from the Marine Department of Chiang Mai was given on May 8, 2013 and the bridge is slated to be 3 meters wide and span 110 meters.

The bridge was not only heavily damaged during the floods but has also seen subsidence since its construction in 1966 by Montriram (Montri) Koslaphirom who named the bridge in honor of his wife Chansom.”

This picture was above the short article: 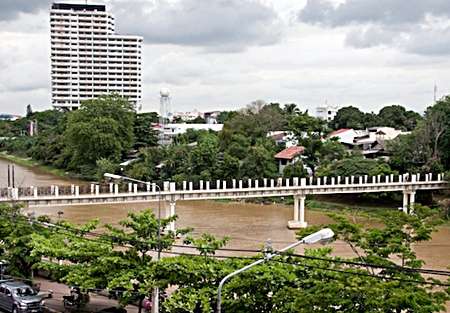 The bridge was not completed on September 2, 2013. Apparently authorities cancelled the contract with the construction company and took down the banner. In early 2014 not much happened…..until I took this picture on July 26. 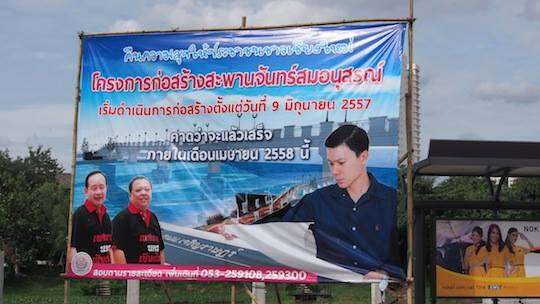 Announcement that construction of the bridge will start on June 9, 2014 and be finished in April, 2015. Picture taken on July 26, 2014 by Frans Betgem

Local authorities informed us on December 23, 2014, that the reconstruction of the bridge was indefinitely put on hold.

In 2015 reconstruction of the bridge started again with a new contractor. I posted this picture on Facebook on March 2015: 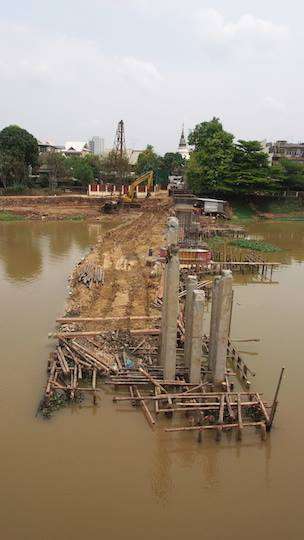 On May 15 City News Chiang Mai featured an article with the header: Foot Bridge Returns after Four years. It stated that at each foot of the bridge “a pretty grass knoll” would be made. The mayor promised to make this bridge a beautiful Lanna style bridge which will become a tourist attraction and will be safe for visitors and locals to cross the river from Wat Gate to the market.The mayor said that the bridge would be finished by Loy Krathong at the latest. At the time of writing the bridge was at 60-70% completion, according to City News Chiang Mai. 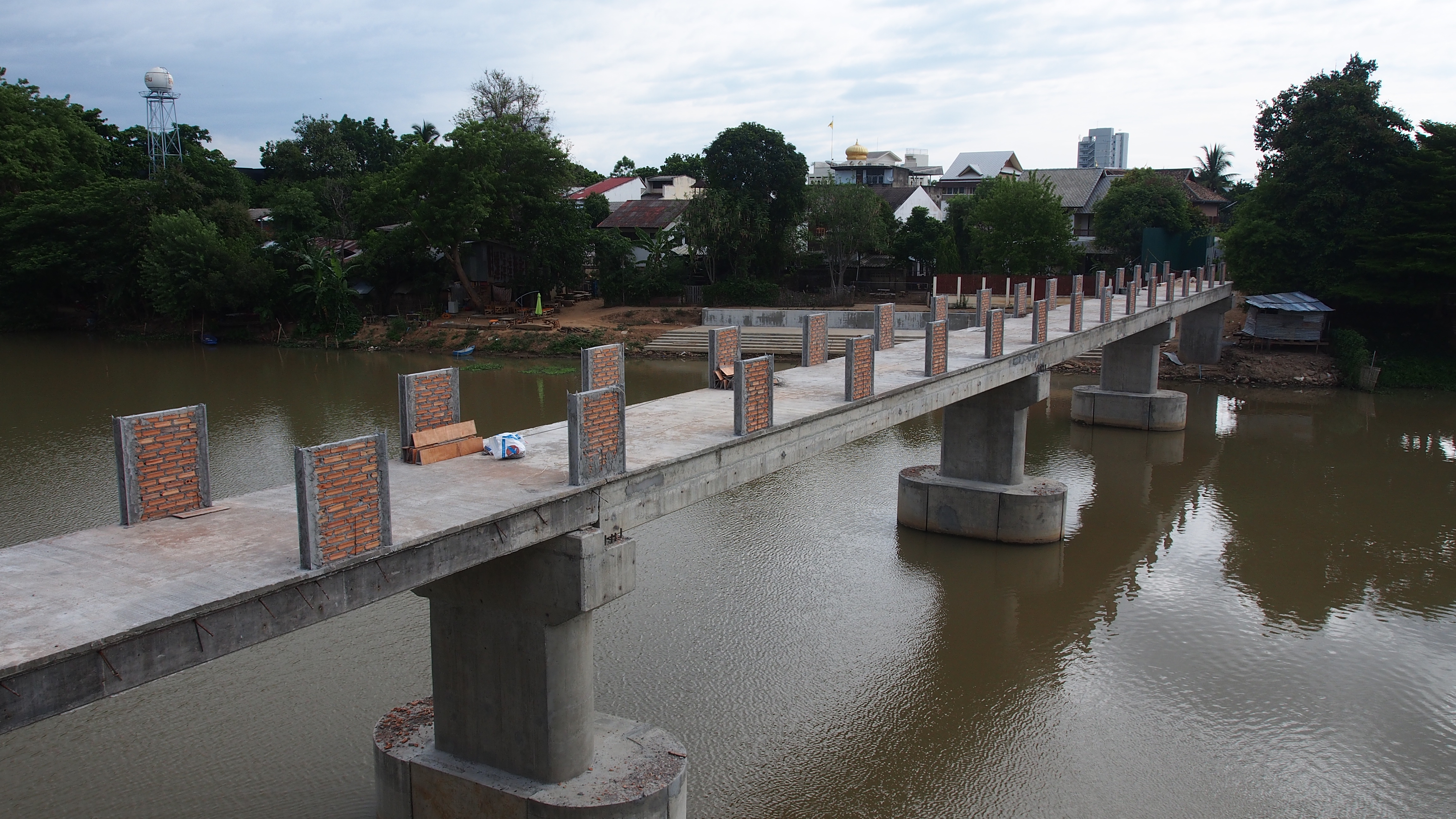 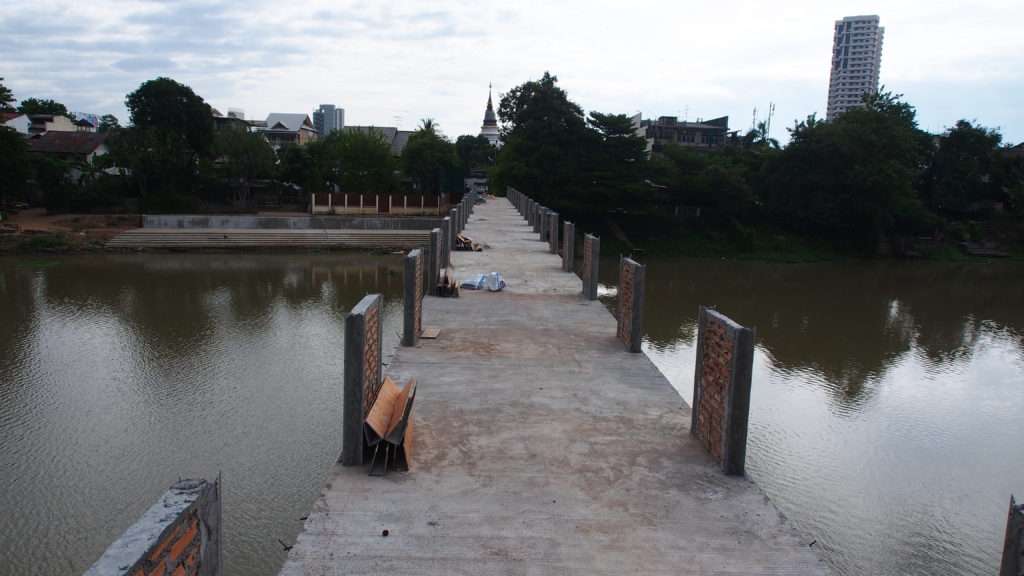 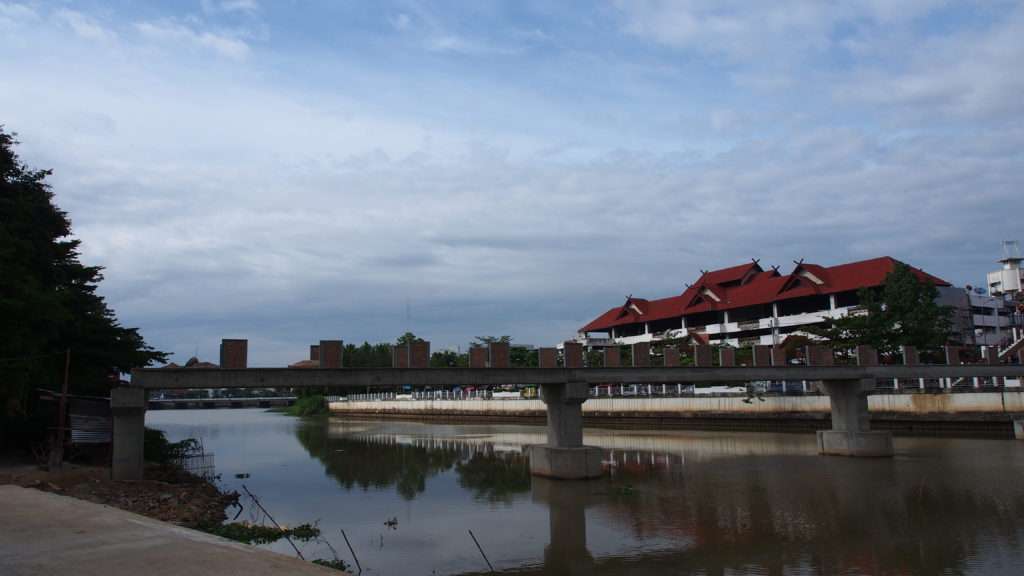 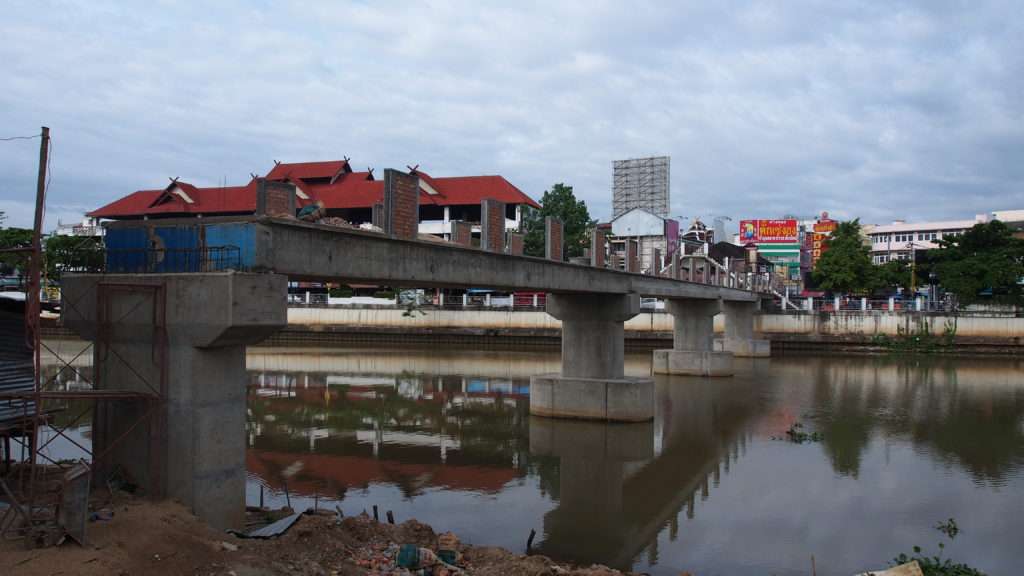 Well, the bridge was not completed before Loy Krathong which was on November 25, 2015. I took these pictures on November 2, 2015. Work was progressing at a snails pace…. 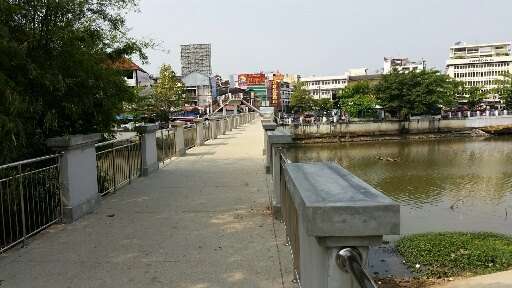 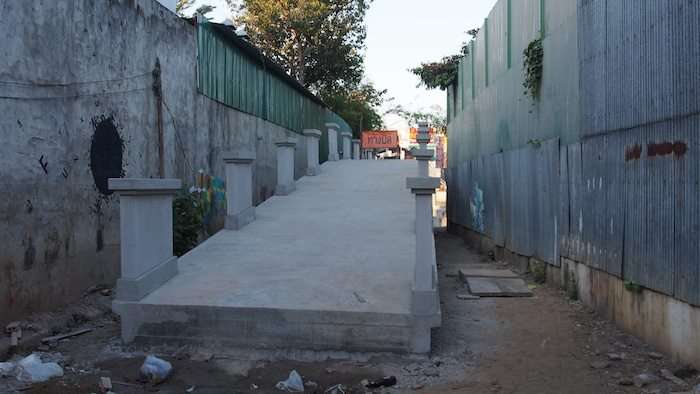 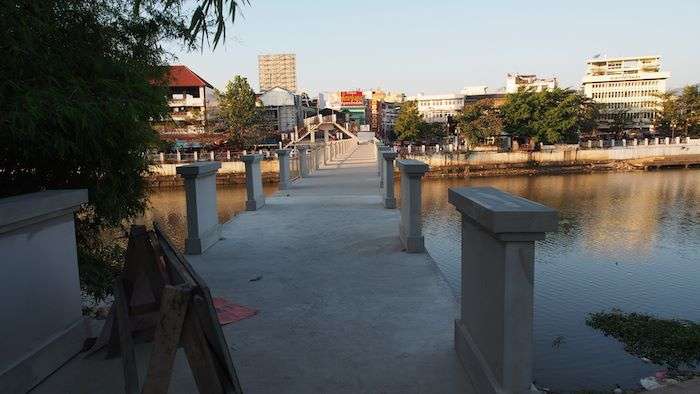 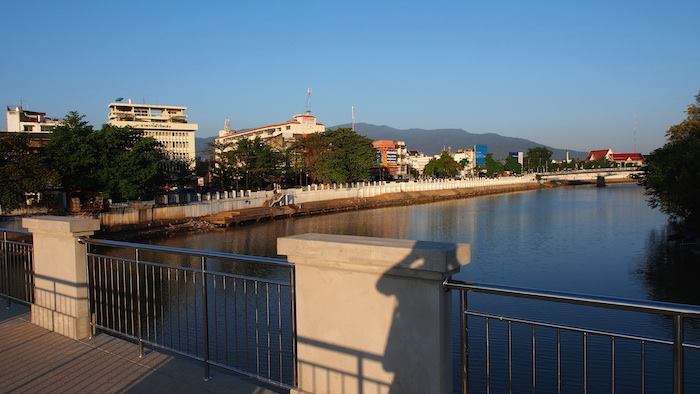 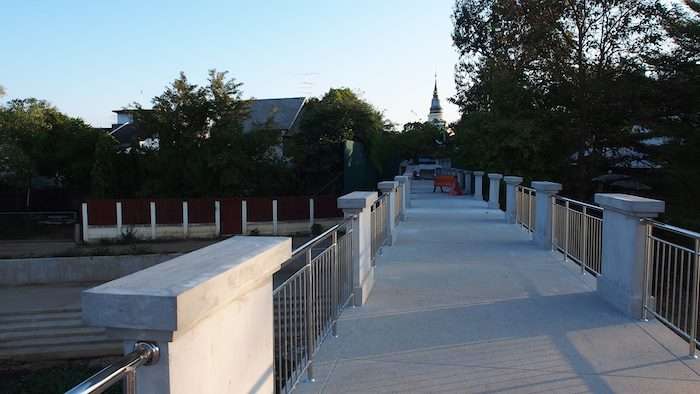 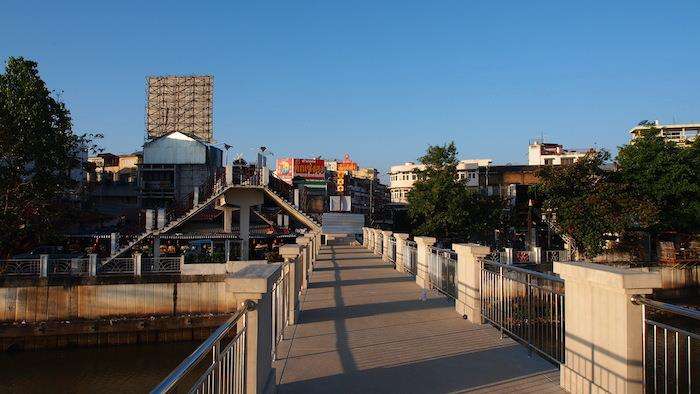 “Chansom Anusorn footbridge over the Ping River this morning. The bridge is not finished and no one is working on it. Met someone who lives in the neighbourhood. He muttered something about a contract….Oh my!” 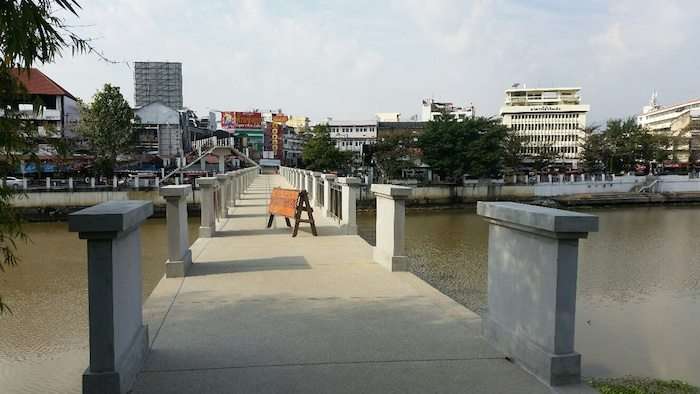 May 24: “I took this picture this morning of the reconstructed Chansom Memorial Bridge. The reconstruction was completed quite a while ago but the bridge is still closed….:”

At least now the lighting had been installed. By the way, I would certainly not call this bridge “Lanna style”…..I am still looking for  the “pretty grassy knolls” at each side of the bridge. 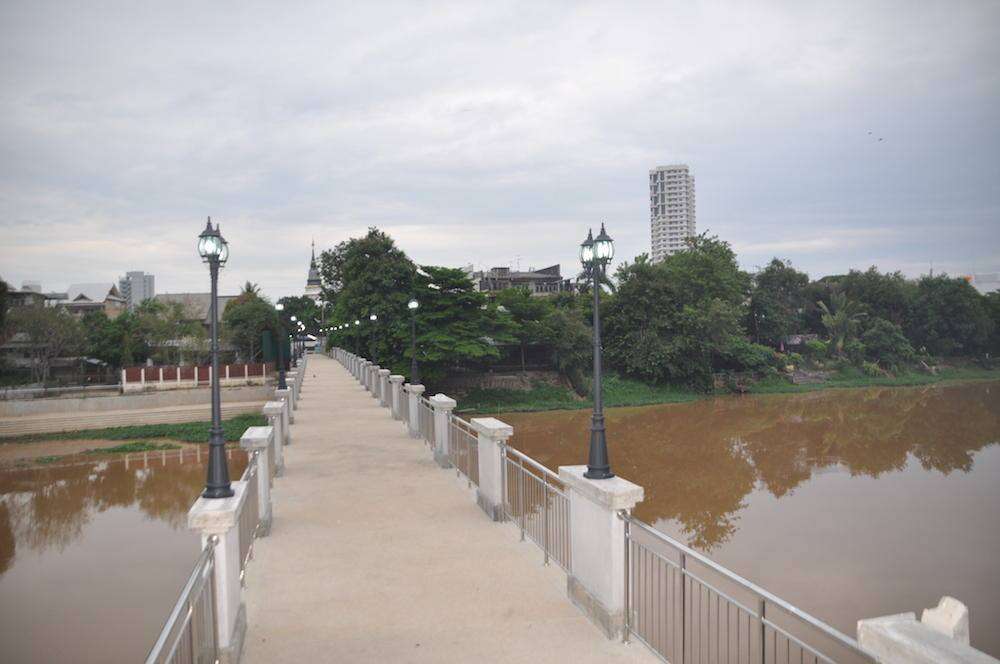 Anyway, excitement was mounting but it would take until August 14 before the opening took place. On August 13 I sneaked across the bridge: 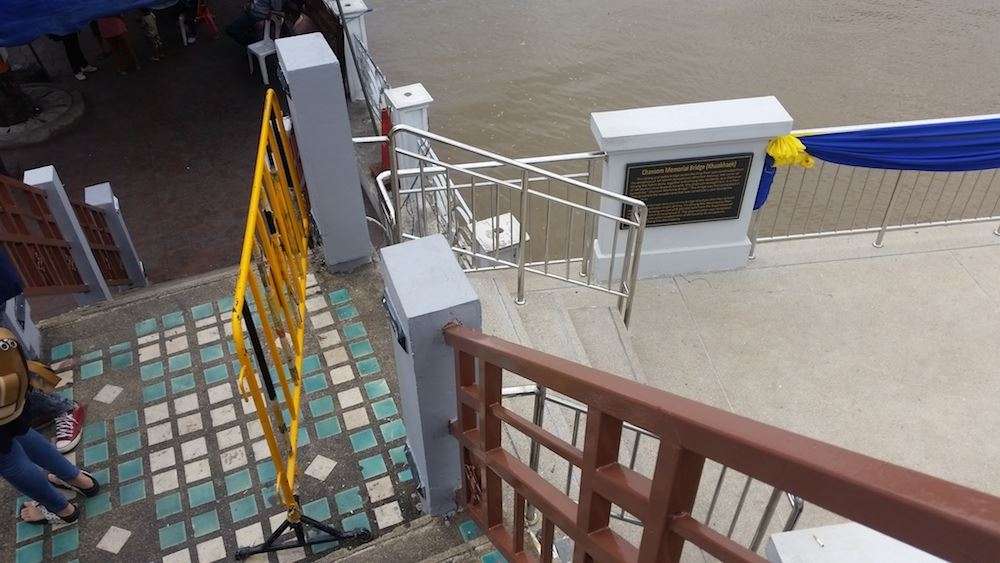 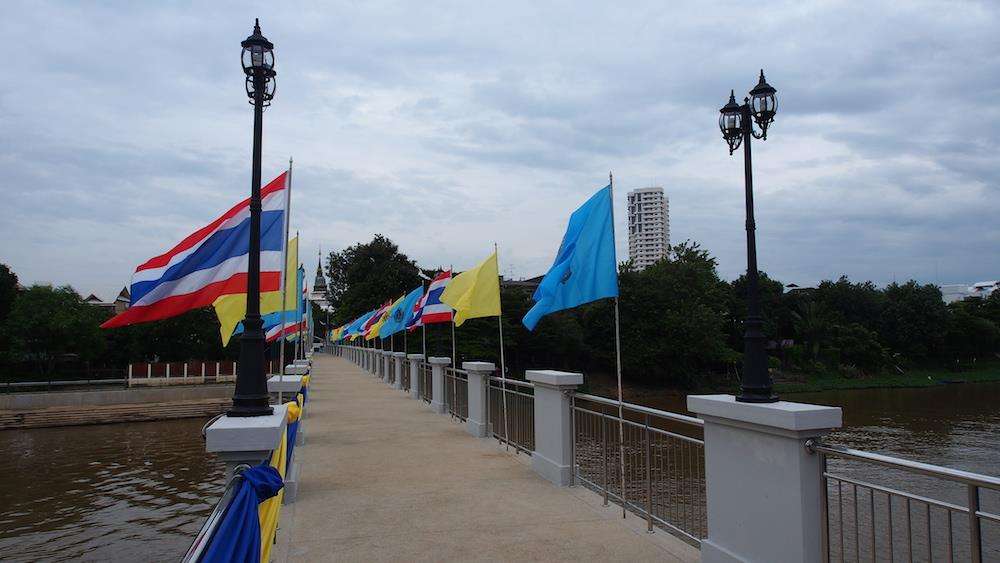 Chansom Memorial Bridge on Saturday, August 13, 2016, a day before the opening.

The opening of the new Chansom Anusorn Bridge

The opening took place on Sunday, August 14, and was a memorable occasion. Below are some of the pictures. 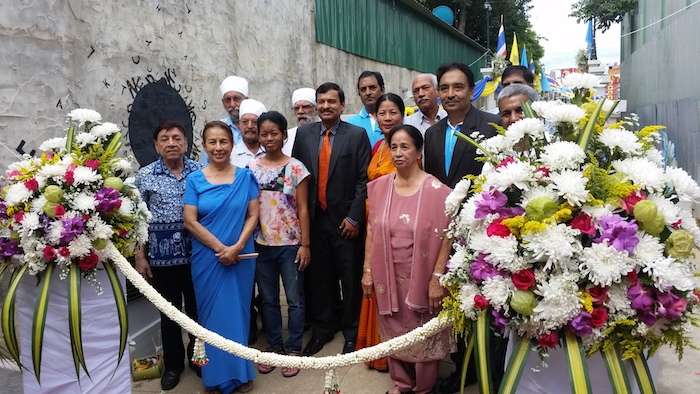 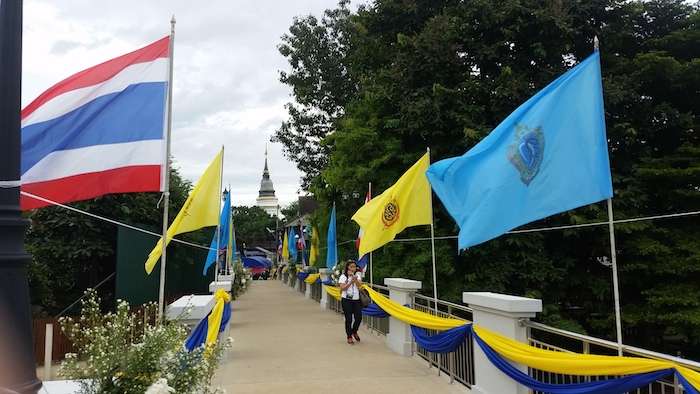 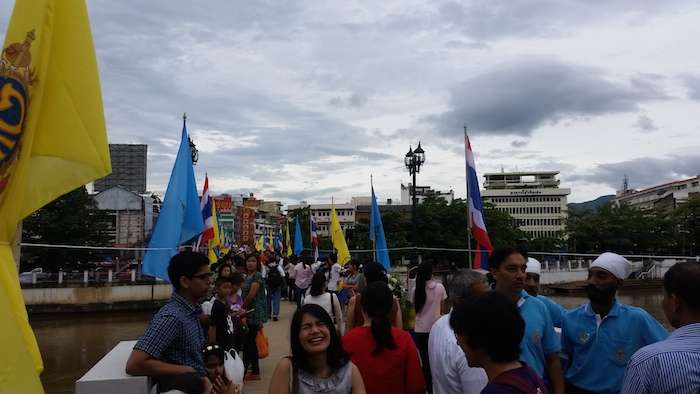 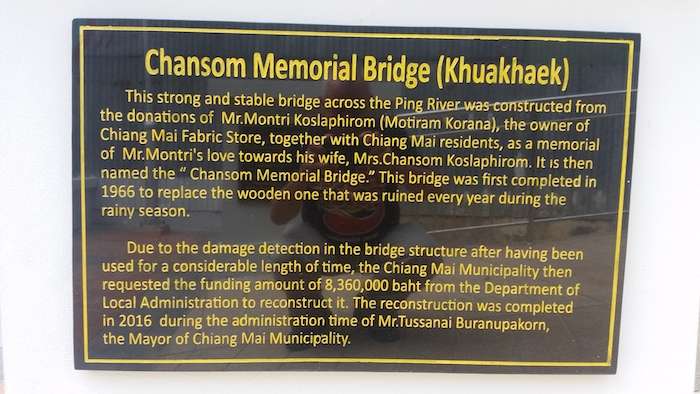 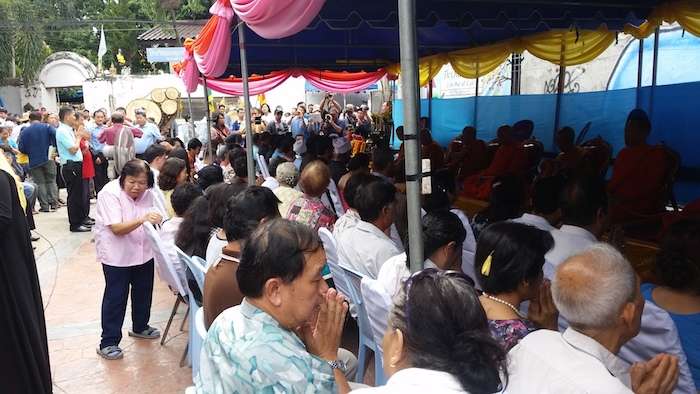 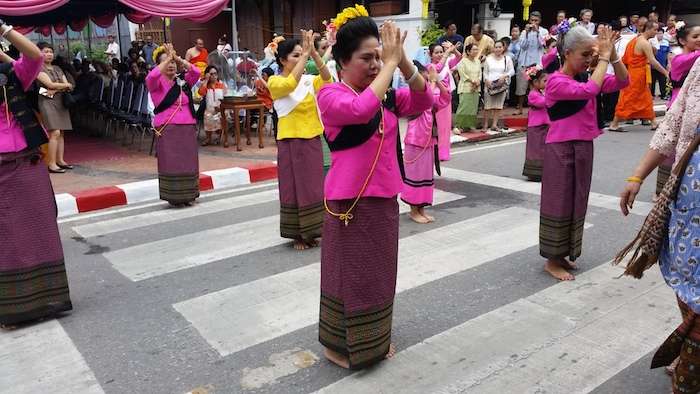 This finalizes the story of the reconstruction of the iconic Chansom Memorial Bridge.