Bill and Sarah Streatfeild with Frans in Chiang Mai

Doi Suthep or the Chiang Mai Hill, as the mountain that looms over Chiang Mai was once called, became a popular destination for foreigners living in Chiang Mai more than 100 years ago. Some of the earliest accounts of foreigners exploring Doi Suthep are from the Irish botanist Dr. Arthur Francis George Kerr and the German botanist Carl Curt Hosseus. When the first bungalows were constructed on the mountain is not clear but this certainly happened before 1920. It is not easy to find information on these structures and their location. From the account of the visit to Chiang Mai of British plenipotentiary Robert Greg in 1922 we know that the British Consulate in Chiang Mai had a bungalow on Doi Suthep. The British firm Bombay Burmah Trading Corporation (BBTC) had a bungalow on Doi Suthep. It is likely that its competitor, the Borneo company Ltd., had one as well although I have not been able to find any evidence of that.

These two companies dominated the teak industry, together with the Leonowens Company, the Anglo-Thai Corporation and the Danish East Asiatic Company.

The American Presbyterian Mission had one or more houses on Doi Suthep. Dr. James McKean, founder of the McKean Rehabilitation Center, had a bungalow in which Dr.Kerr stayed sometimes.

Retired BBTC employees Arthur Queripel and Edward Walter Hutchinson owned houses on Doi Suthep. Based on my research I have come to the conclusion that most of these houses were located where now the National Park Bungalows are, just above the Wat Phra That Doi Suthep. The only detailed account I have been able to find of people who stayed in one of these houses is from Ursula Streatfeild, whose husband Bill worked in Bangkok for the BBTC.

Bill and Ursula Streatfeild went to Chiang Mai in the early 1930s and stayed in a bungalow of the Bombay Burmah Trading Corporation (BBTC) on Doi Suthep. They were invited by Peter Pointon and his wife Margaret “Jimmy” Pointon. Peter Pointon was a forest manager for the BBTC in Lakon (Lampang).

Ursula Streatfeild wrote about her experiences in Siam in a book titled “A long way from the shops, recollections”. This book was privately printed and published in 1991. I met their son Bill Streatfeild for the first time in Guilford, UK, in March 2018. Last year he came to Chiang Mai with his wife. I brought them to the Foreign Cemetery and to the Gymkhana Club. Bill allowed me to share the story of the trip to Doi Suthep.There are no pictures of the trip of Bill and Ursula Streatfeild to Doi Suthep. I collected some photos to go with the story. 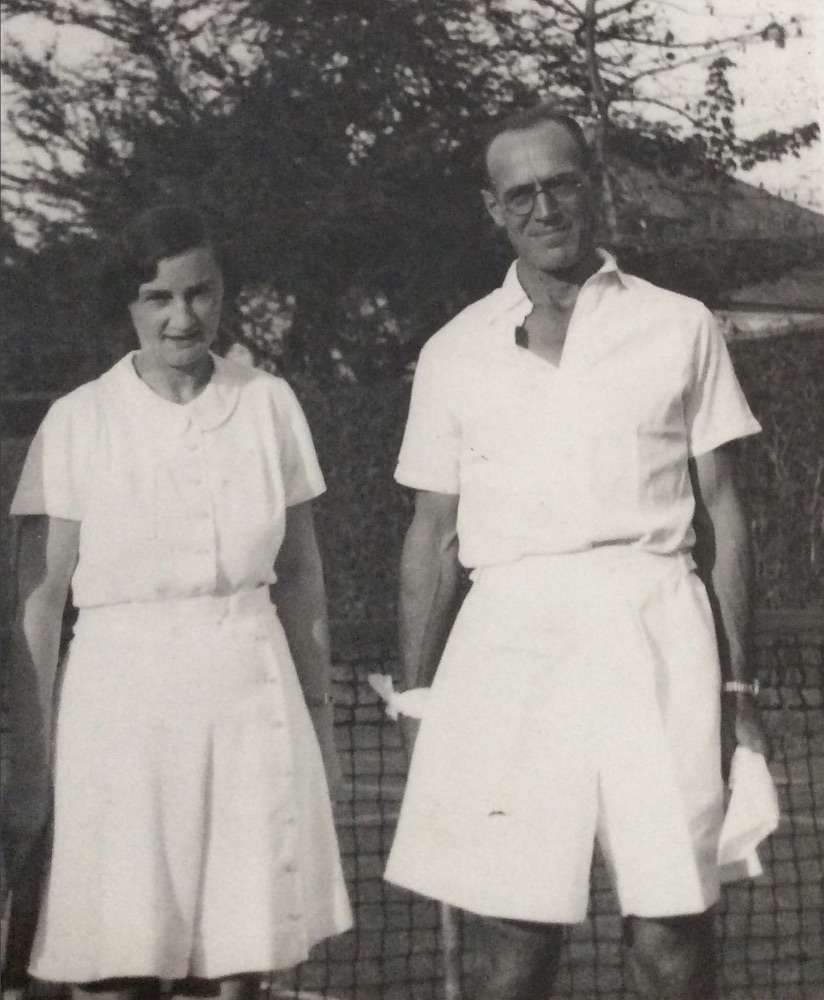 I give the word to Ursula Streatfeild:
“In the hot weather William and I were invited by the wife of the up-country manager to stay with her in the bungalow belonging to the Bombay Burmah on the hill above Chiengmai. Her husband was to join-us for occasional week-ends. We went by train from Bangkok to Chiengmai and spent one night at a bungalow there before starting up the hill. Chiengmai is the northern capital of Thailand. Our host and hostess showed us round and presently we leant over a bridge and gazed at the teak logs in the river below. William was very mystified when our host murmured, “There you see Daddy’s bread and butter”. 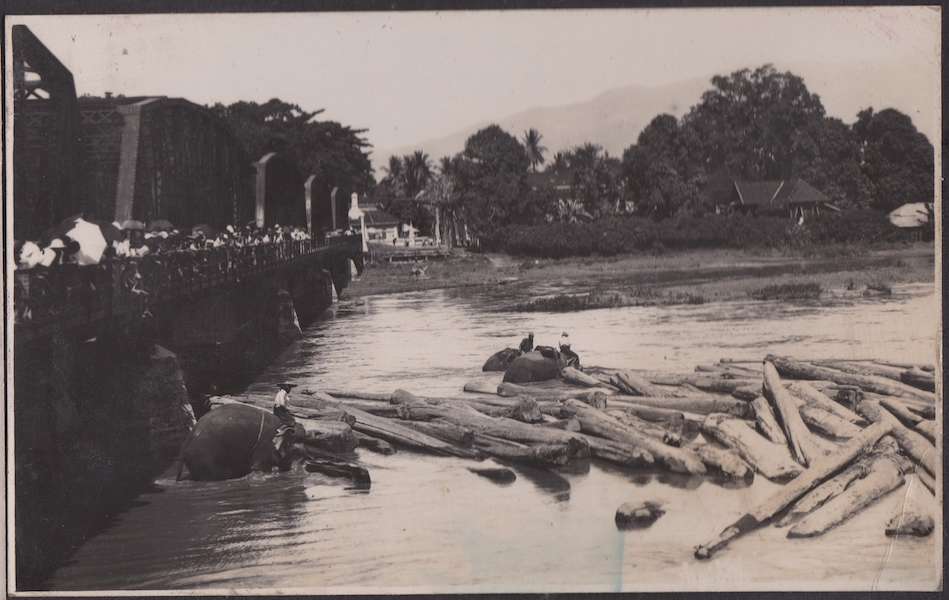 Ursula continues:
“Next day we set off. The bungalow was about 3,500 ft up and you could walk, ride, or go in carrying chairs. My hostess Jimmy Pointon, rode some of the way. William and I were carried in chairs slung between poles when we got tired. William fell out at one point and I saw him disappearing over the edge of a ravine. However it was not very steep and he luckily caught in a bush and was rescued with many yells and shouts by our carriers. 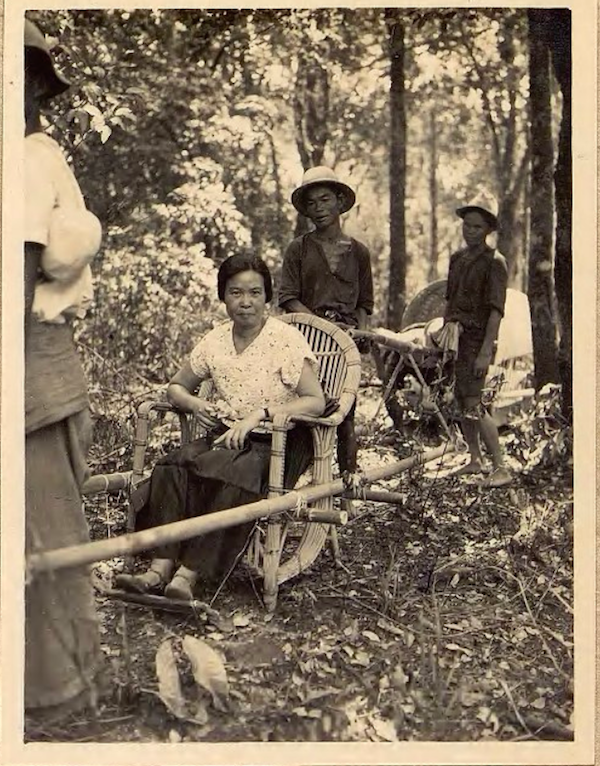 Sedan chair in which people were carried up to Doi Suthep. Picture Kenneth Wells.

We took up masses of pots and pans, food of every sort and live ducks and chickens. These as well as our own belongings were carried up by the bagage elephants. They arrived at the bungalow a good deal after we did. In the evening we suddenly heard the faint tinkle of bells coming nearer and then they slowly ambled in. They had the most charming baby elephant with them.”

Staying in the bungalow on Doi Suthep

“The bungalow was a wooden one with a thatch of attap leaves, primitive but blessed cool. We used to go for walks but I was surprised how few flowers the jungle produced. We saw and heard dozens of inevitable monkeys, jungle fowl sounding like the farmyard at home and best of all saw a Toucan sitting on a branch looking exactly like an advertisement for stout. We were up there six weeks. My hostess and I led a very happy, lazy life. Letter and messages were sent down into Chiengmai by runners and any shopping had to be done by them. It was usually a day or two before they re-appeared, sometimes bringing mail, always the most wonderful moment.

We sometimes walked a few miles along the jungle paths and played bridge with our nearest neighbours. William thrived and actually had pink cheeks.
One morning we had an angry letter, brought by the servant of a man who was camping miles away in a bamboo and attap house he had built for the hot weather. These temporary houses were very attractive, beautifully made in a very short time by the Thais. The main supports were bamboo, with split bamboo sides. The roof was thatched with attap palm leaves.” 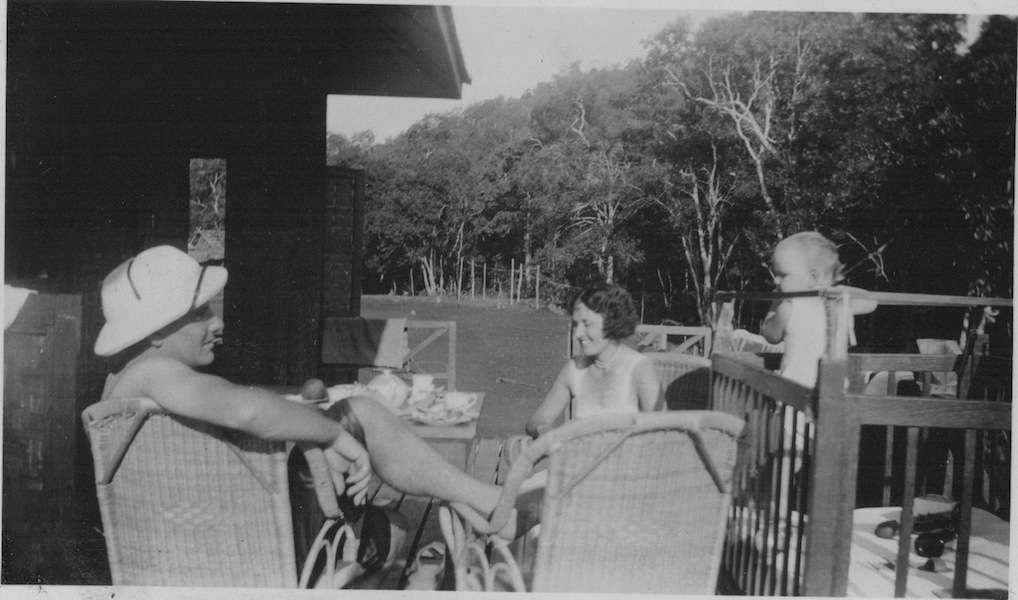 “The letter declared that the Bombay Burmah elephants had apparently walked into it and eaten a lot of it in the night and would my hostess please restrain them in future. No one was hurt. The house was of course damaged but easily repaired but how we laughed. The elephants were always let loose, hobbled to find food at night.
Our other neighbours were American missionaries who were their holidays a few miles up the hill. We had an all-day picnic with them and walked up to meet them, taking a baggage elephant to carry picnic things and cooking pots.
One of them told us of a picnic they had recently with some other missionaries, having each agreed to bring a contribution to the feast. “Well”, said our friend, “I took baked beans, Mary Anne took baked beans and Louise took baked beans. My, I was chagrined.” 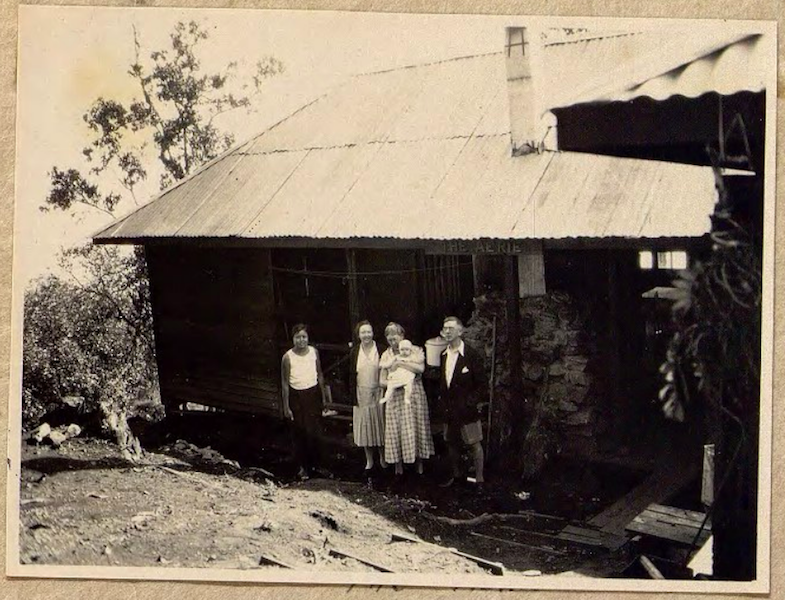 The BBTC bungalow was located where now the national park bungalows are, less than 10 mins walk from the base of the stairs leading to Wat Prathat Doi Suthep. Edward Walter Hutchinson has his own bungalow, within walking distance of the BBTC bungalow. The missionary bungalows were also close.

This concludes the story of the trip to Doi Suthep by Ursula and Bill Streatfeild.