The Charoensawas Bridge 36 is a bridge across the Padung Krung Kasem canal that runs parallel to the railway close to Hualampong Railwaystation. The bridge gives access to the Matrichit intersection from where several roads lead into Chinatown, to the Chao Phraya River, to the July 22 Roundabout and to the north. The bridge had four pillars consisting of four smaller pillars on its corners. The bridge appears on many pictures. I don’t know what the number 36 stands for.

Below is another one of the spectacular aerial pictures of Bangkok that were sent to me by Steve Darke. Apparently they come from the Arlanda Collection in Sweden. These are most likely the first aerial pictures of Bangkok. This one shows the Hualampong Railway Station that had been opened only a bit more than five years earlier, on June 25, 1916.
This picture was taken on August 17, 2465 (1921) at 10 o’clock in the morning at an altitude of 400 meters. Pilot was flight lieutenant (ร.อ.= เรืออากาศเอก) Noonphakdee. The photographer was flying officer (ร.ท.=เรืออากาศโท) Chuwanasen (correct me if I am wrong).
Right opposite the entrance of the station is the station of the Paknam Railway. Next to the station we see the Padung Krung Kasem with the Charoensawas Bridge 36 (สะพานเจริญสวัสดิ์ 36) with its characteristic pillars. Also visible is the July 22 roundabout (วงเวียนยี่สิบสองกรกฎาคม) at the top left of the picture. Thailand entered World War One by declaring war on Germany and Austria Hungary on July 22, 1917. Thanks to Steve Darke and Dick van der Spek. 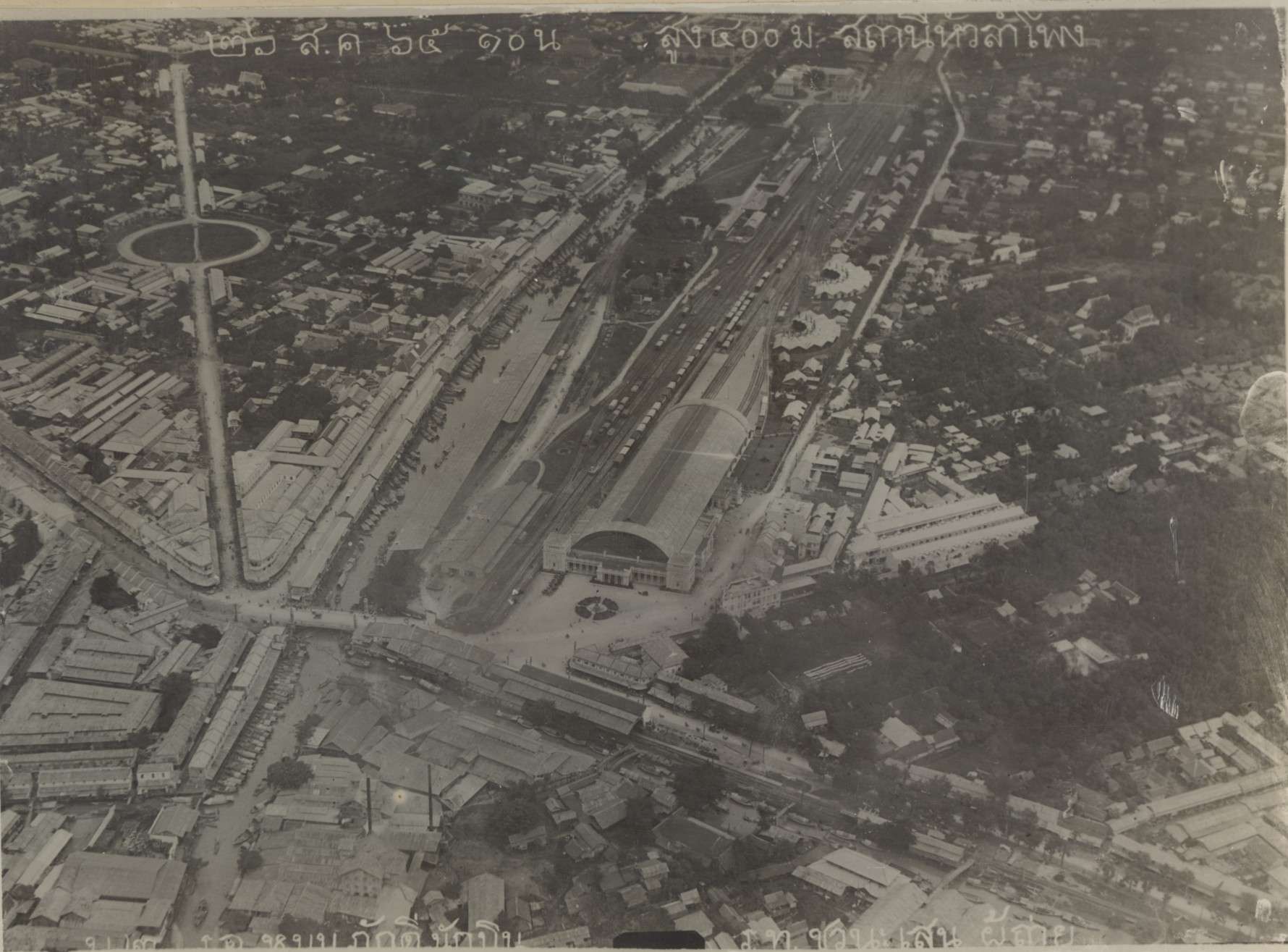 I took my picture last week. The only clearly recognisable building is the one on the left on the corner of Rama IV and Maitrichit roads. 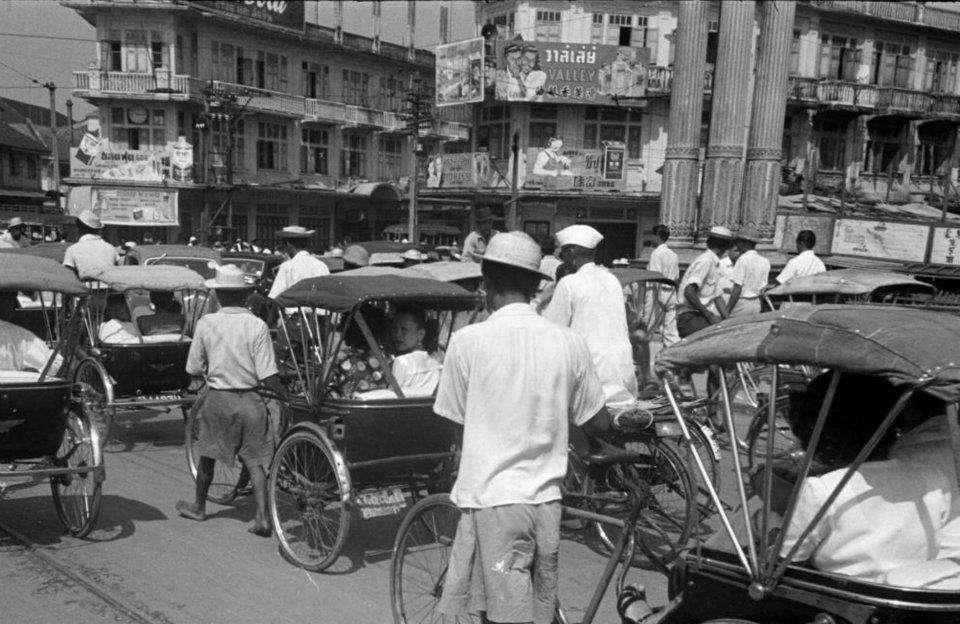 This old picture was made in 1950 by Dimitri Kessel, a photographer of Life Magazine (Thanks Jeff Beurtheret!). 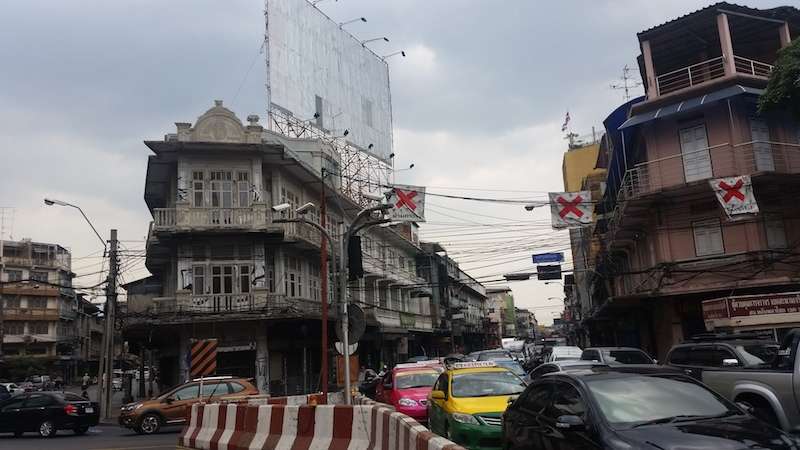 He must have been standing on the Charoensawas Bridge 36 over the Krung Kasem canal. This is very close to Hualamphong railway station,  We are looking west towards the Maitrichit intersection towards Chinatown. Lots of samlors! The bridge is inaccessible at the moment due to the construction of the extension of the subway so it was difficult to make a good comparison picture. The characteristic pillars, visible on the old picture, are not there anymore.

Another great picture of Dmitri Kessel 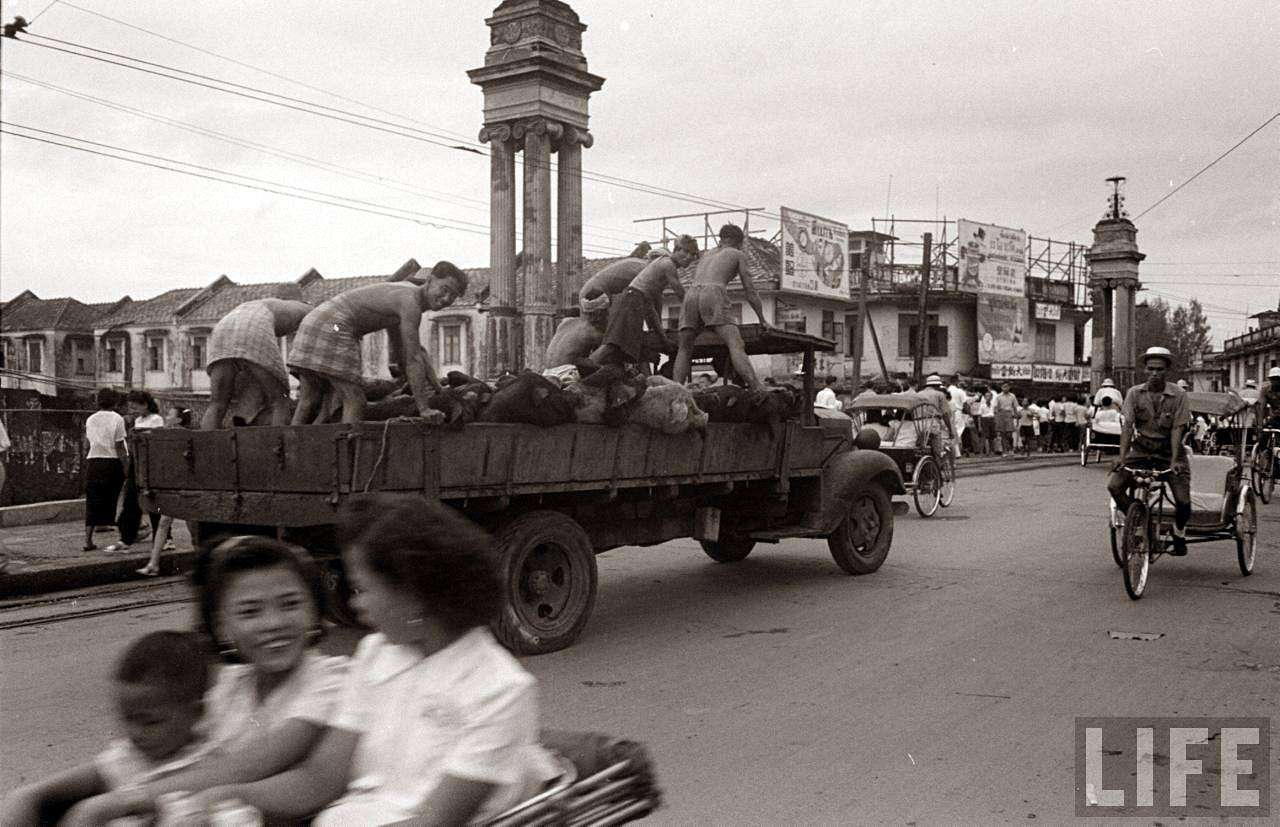 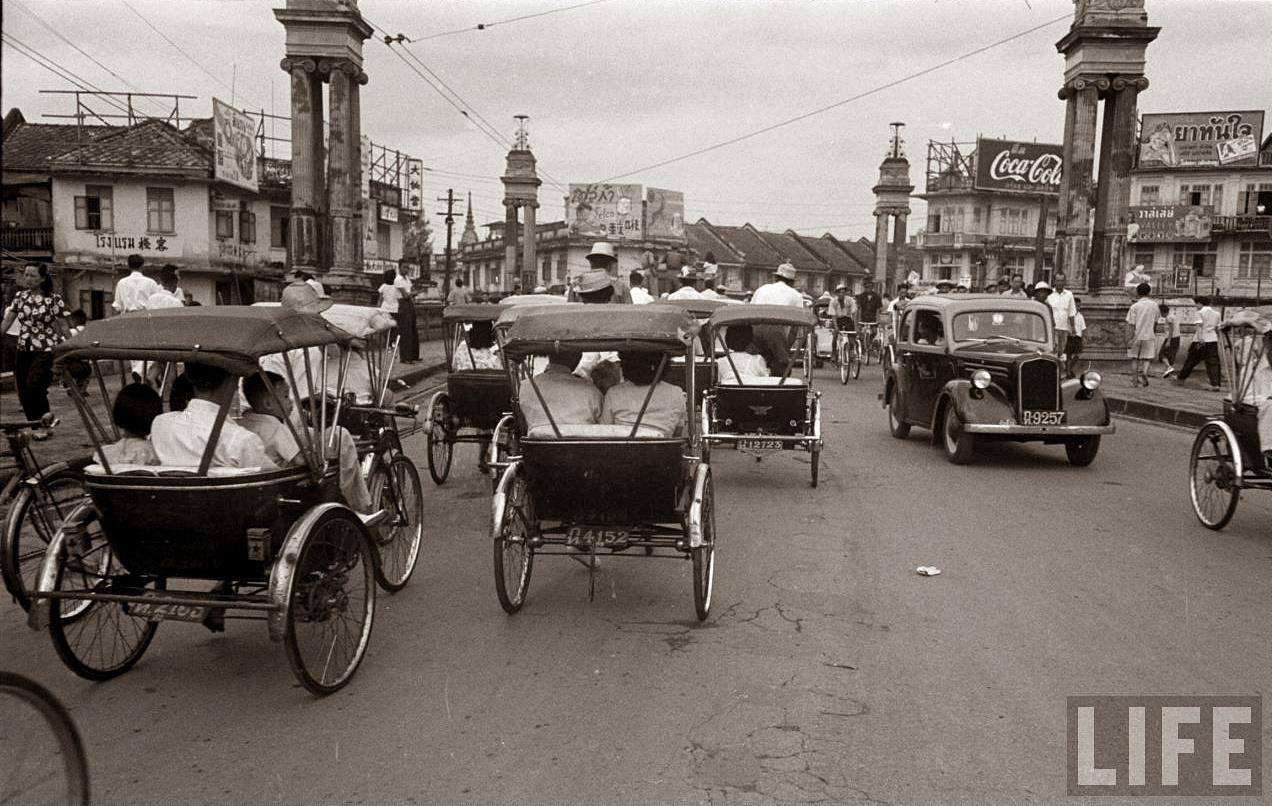 This picture is taken from the other side of the Padung Krung Kasem. On the left the Nguan Saeng Hotel. I have not been able to find any information on this hotel. 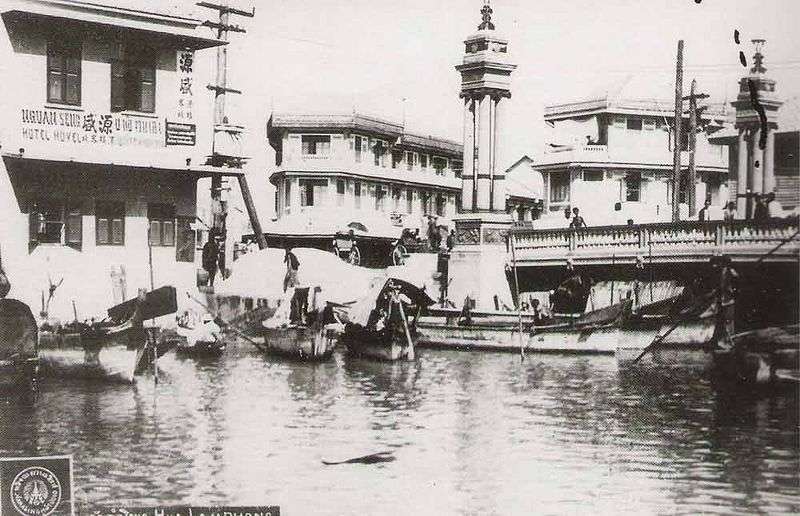 Below undated picture shows the same view towards Chinatown. I think this picture was taken in the 1930’s. Many pulled rickshaws around. 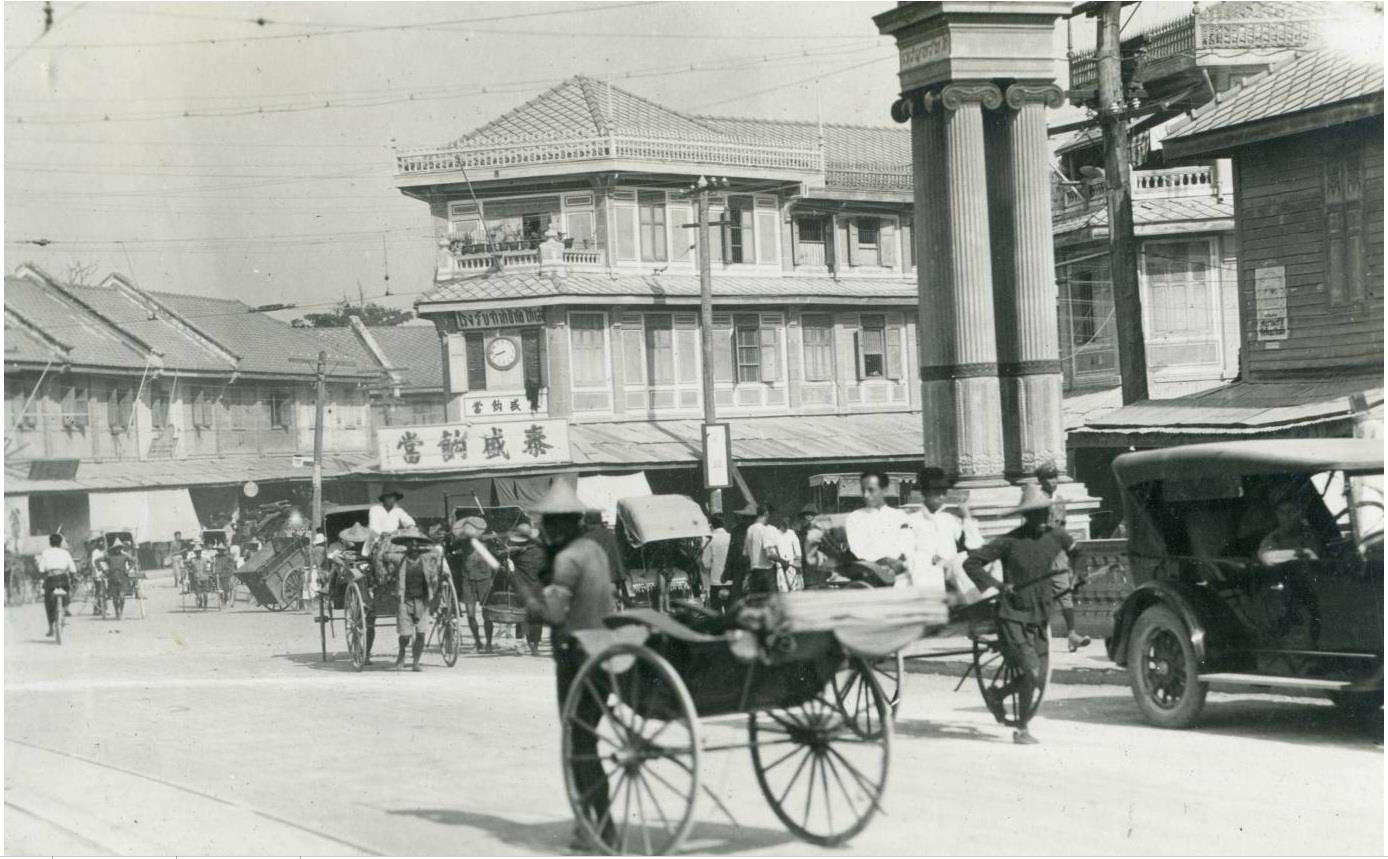 This  undated low-resolution picture is looking east from the China town side to Hualampong Railway station. 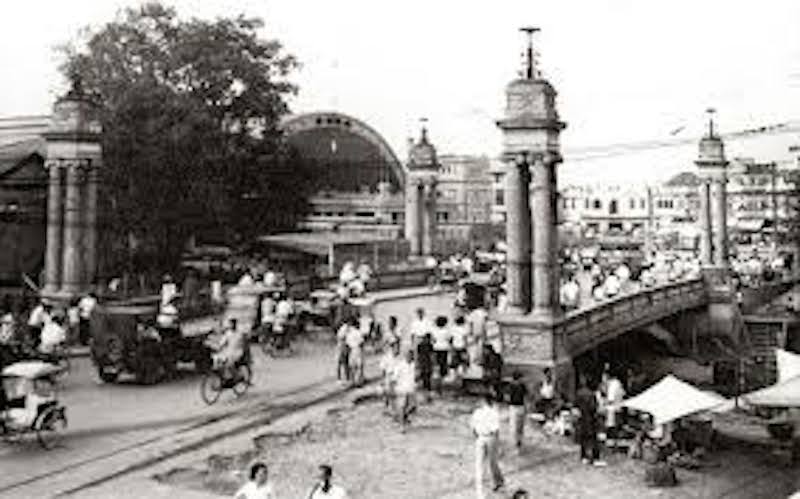 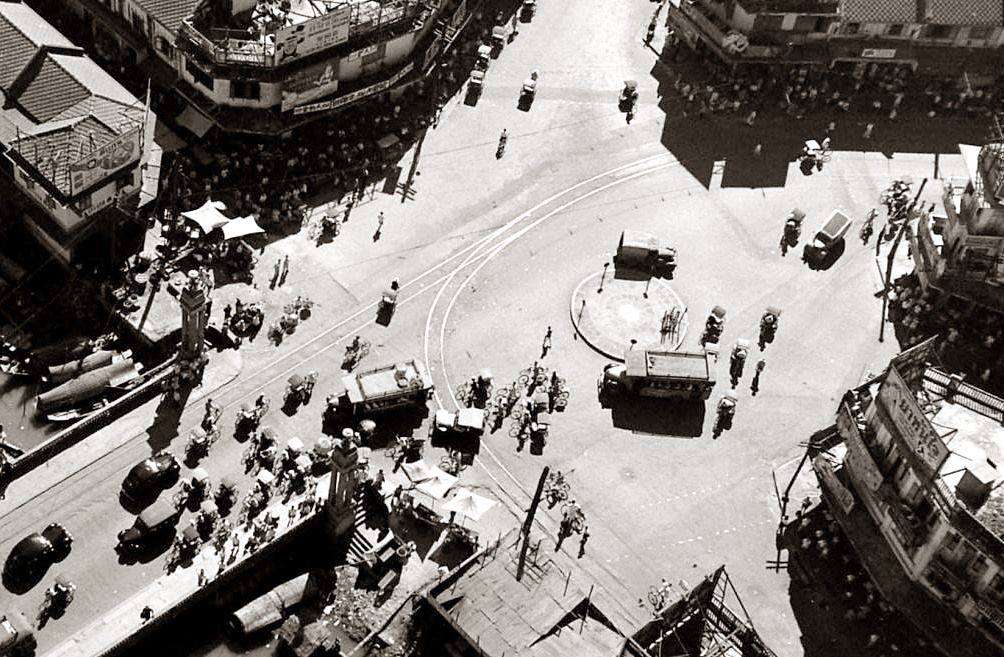