The Missionary Houses in Phrae 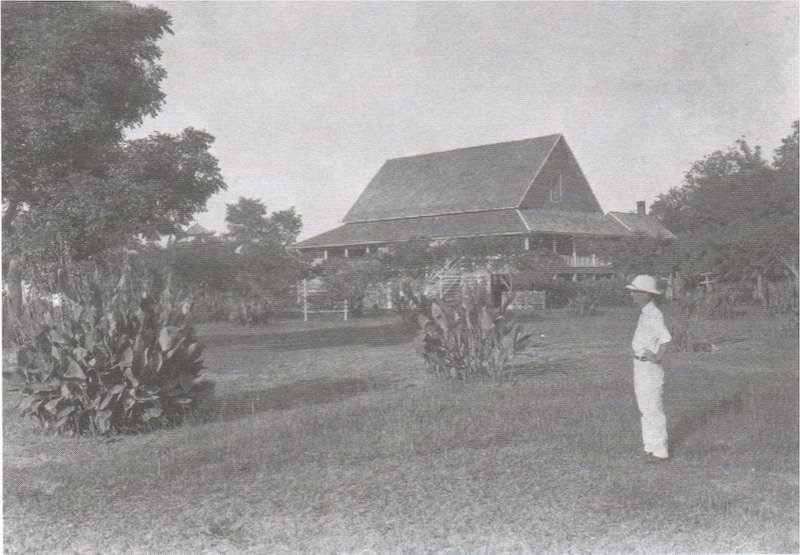 American missionary Jacob Lott Hartzell in the garden of one of the missionary houses in Phrae.

On her way to Muang Nan American missionary, Lucy Starling visited Phrae in 1912. At that time these missionary houses were just outside the city on the Yom River. There were two bungalows at the site. She described them as follows in her book Dawn over Temple Roofs (New York, 1960):
“The two bungalows were huge, barny structures, built of teak, with long, wide porches. In each of these, about twenty people camped.” The Yom River had changed its course though and was now cutting into the banks. “A new site must be chosen and the buildings moved before they drop into the river”….. “The buildings on the old site were to be torn down, the planks numbered, and put again in order”, Lucy Starling wrote.

I guess it is one of the reassembled houses I visited last weekend. The house is in bad shape and I was very careful when entering it. 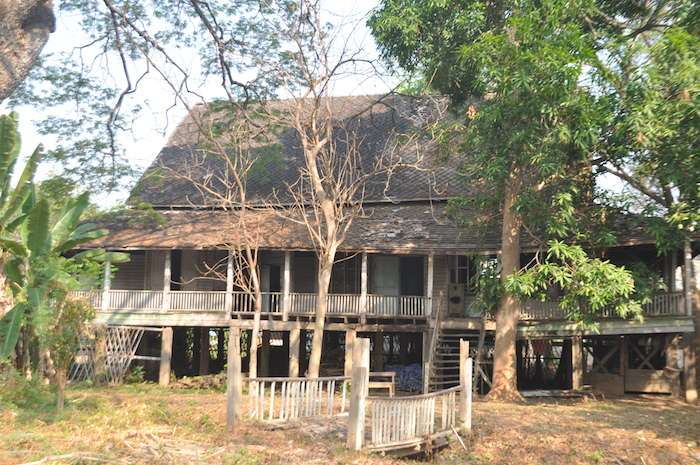 The featured old picture shows American missionary Jacob Lott Hartzell in the garden of one of the houses in 1925.
The US Consulate in Chiang Mai is now involved in a project with local architects to renovate this derelict Phrae Missionary House I visited. Click on the pictures to enlarge them. 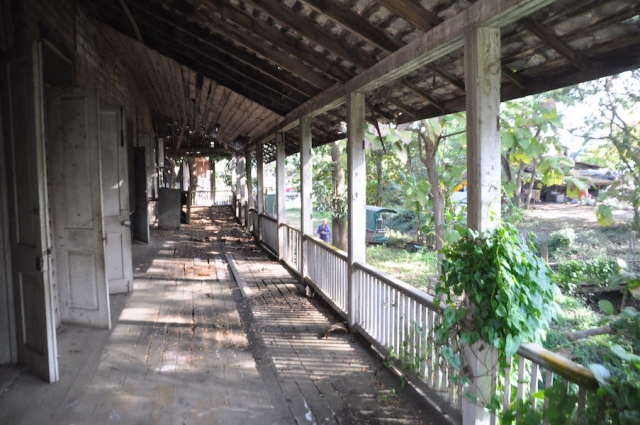 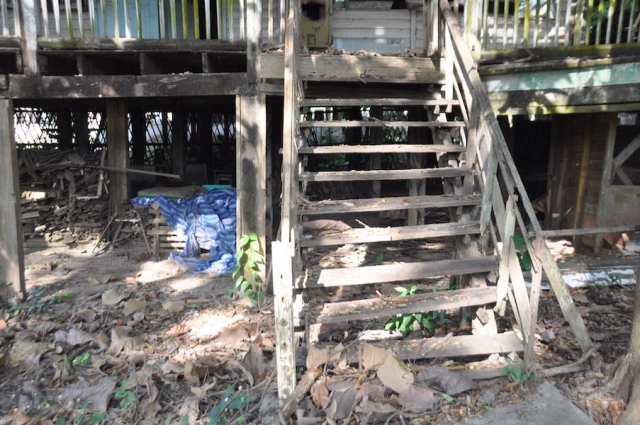 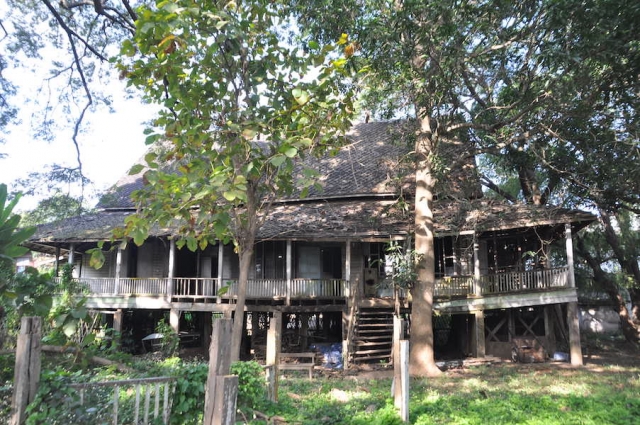 The second of the Phrae Missionary Houses is on the grounds of the Provincial Office of Formal and Non-Formal Education. As far as I know, funding from the US Consulate in Chiang Mai financed the restoration of this house. In 2016 US Ambassador Davies visited Phrae and this house amongst others. Click on the pictures to enlarge them. 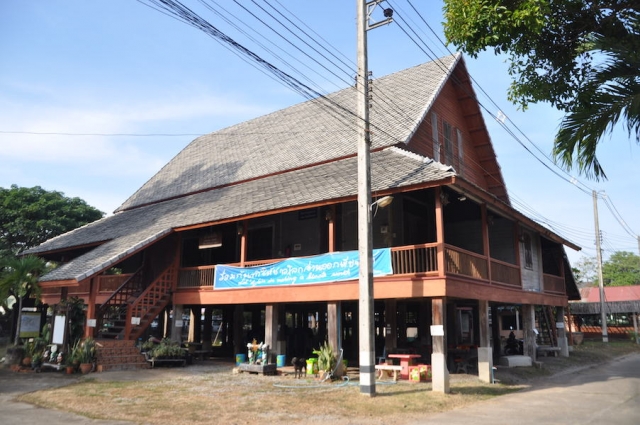 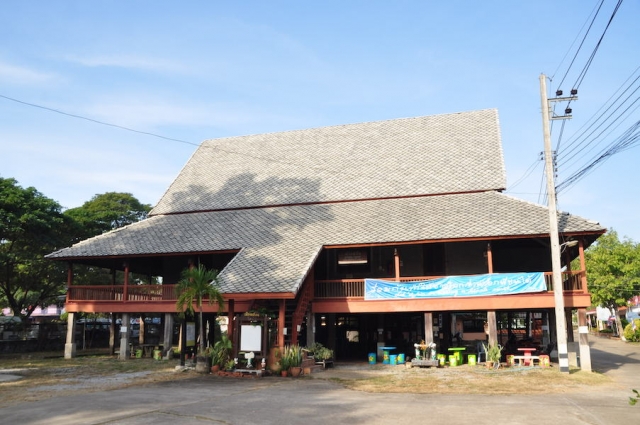 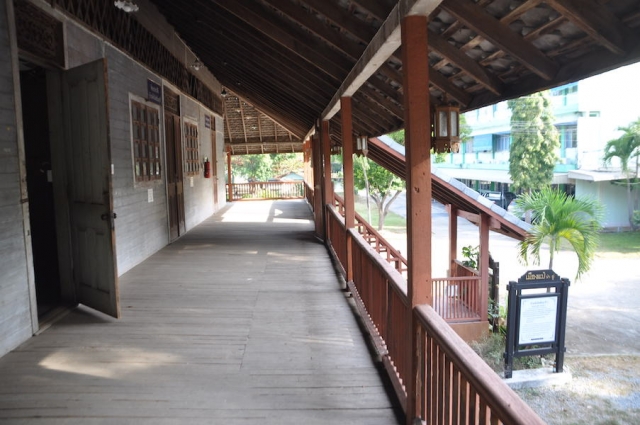 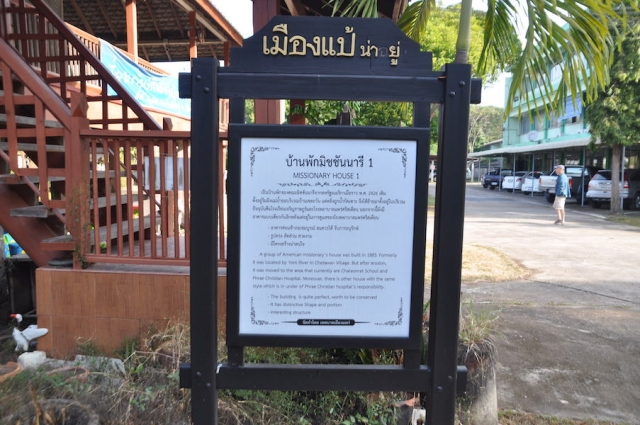 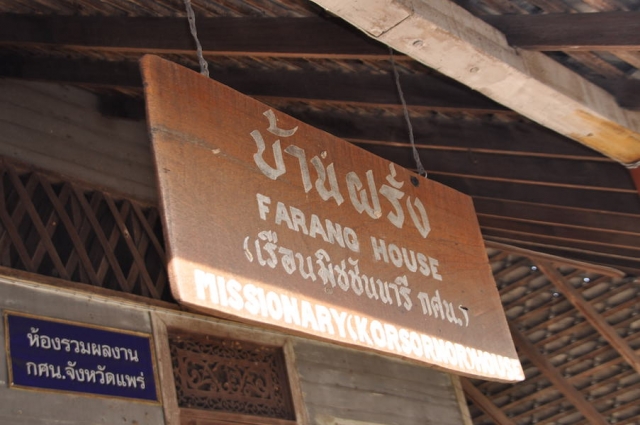 In the house is a sign with information about the history of the house:

“The History of the Missionary (KorSorNor) house

Since 1894, Ordained Minister Pastors Dr.Peoples and the missionaries came to the Chatawan village, Amphor Muang Phrae, Group of Missionaries were lived beside Yom River bank and established a small hospital for charity to help healing people around the community. The School for boys and girls were built and community educational also given in the same time. All facilities were built by missionaries cooperated with Pastors Briggs, the news messenger of the God.
Mrs. Shills and Mrs. Briggs helped to build a missionary home and Chapel, a place for the worship of God. Approximately 1883, missionary house beside the river bank was eroded by water. It was moved into the area of Charoenraj School Currently, located in the Phrae Provincial Office of the Non-Formal and Informal Education. Phrae Christian Hospital was built, subsequently a church and Chareonraj School, increased simultaneously.
The Missionary’s (KorSorNor) house is a large wooden home. Its two floors building with open air ground floor is just benefiting for accessible to many activities. The wooden structure is a cross between the beams. The roof is made of cement, it’s a structure of the roof former house, and there are three steps to connect to directions of south west and east. The kitchen has a wood stove in the middle of a bloated fire to smoke.
The kitchen is grounded with thick and smooth zinc second floor is ground with long and thick wood, roof that covered the entire house, loft room, but not the width. And in 2012 Missionary (KorSorNor) house award for outstanding architectural conservation buildings, institutional buildings from the Association of Siamese Architects under Royal Patronage.”

Update on the missionary houses, February 2021

British Acting Vice-consul in Lampang Reginald Le May wrote in his report of his consular tour in 1914 about Phrae: “The American Presbyterian Mission in Phre have now acquired a considerable piece of land outside the city on the road to the present Railway terminus at Den Chai, and are engaged in building a new hospital, a dispensary, and several private residences for the different members of the mission.” This road is the Yantrakit Kosol Road, road no.101.

The Mission moved two big wooden houses on stilts to that location. These houses were originally built on the Yom River. Because the river changed its course. Consequently, the collapse of the river bank threatened to undermine the houses so they took them apart and reassembled them at their current location on Yantrakit Kosol Road. I posted about the houses before. When I am in Phrae I always go and have a look at these beautiful houses.

A couple of weeks ago I rode my bicycle to check on them. With funding from the US one house was restored years ago and is now used for public events. I could enter the house and walk around. The other house, at the compound of the Christian hospital, is in worsening state. Recently they put tape around the house. It is obviously not safe anymore to enter the house. Six months ago I did go in and it felt a bit awkward. I am afraid that this house one day will collapse if nothing is done. 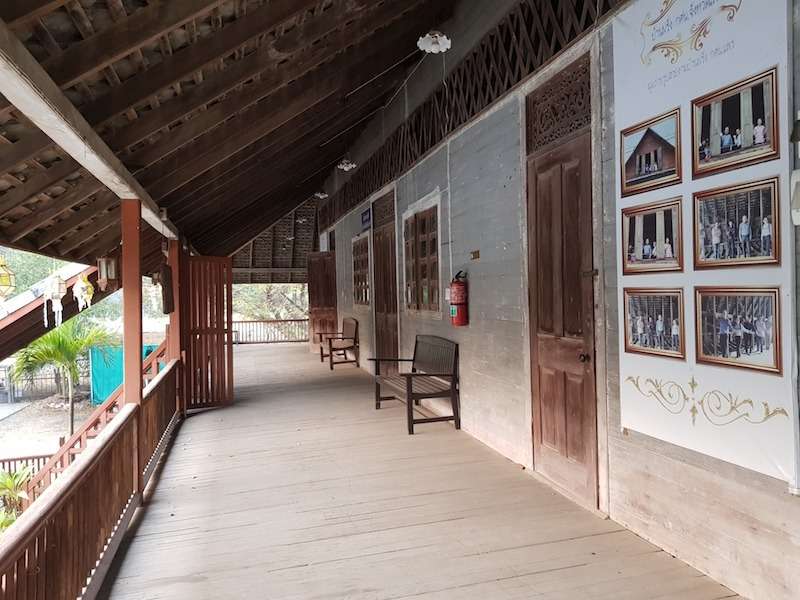 Veranda of the restored Missionary House 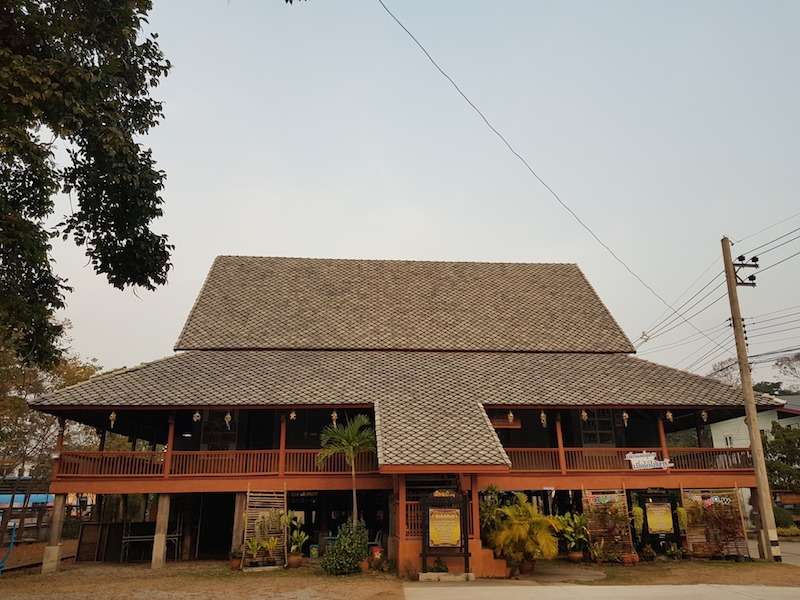 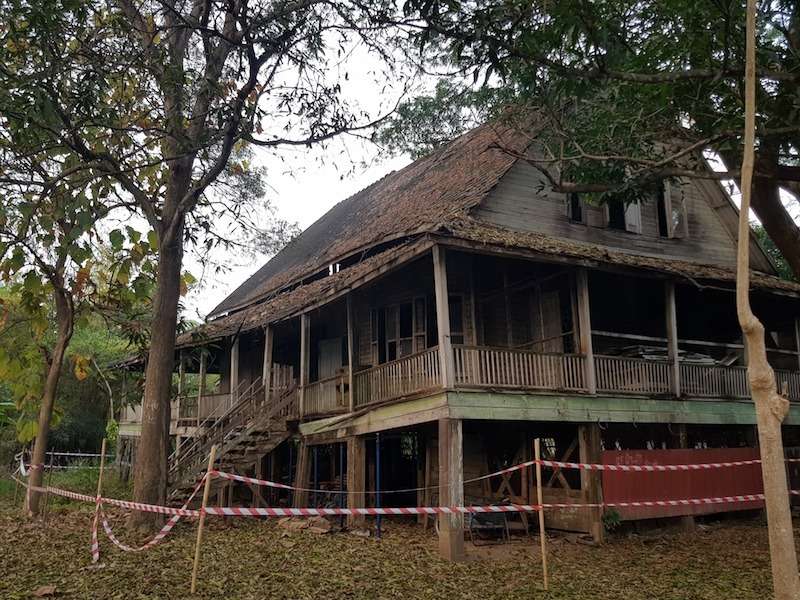 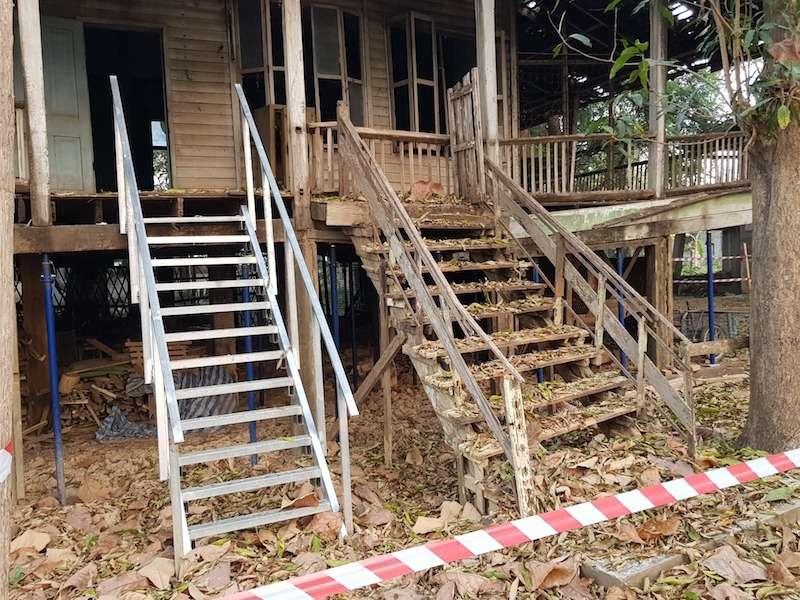 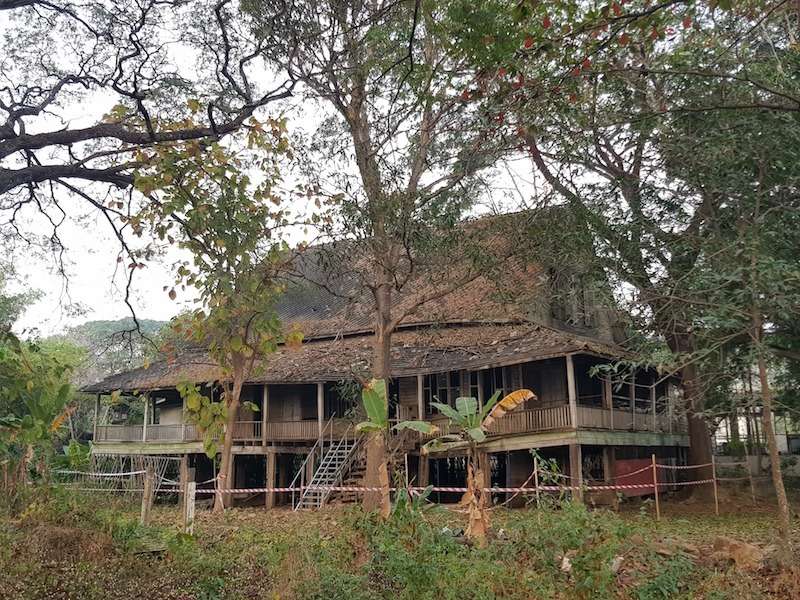 Both missionary houses feature in our historical Lampang, Phrae and Nan: Past and Present tour.

This is the location of the restored missionary house. The derelict house is almost next door. You have to enter the parking lot of the Christian Hospital and keep left. These houses are listed in the Things to do in Phrae. If you are interested in old wooden houses it is worth visiting the former compound of the Danish East Asiatic Company.