The Pajo Waterfall in Narathiwat Province 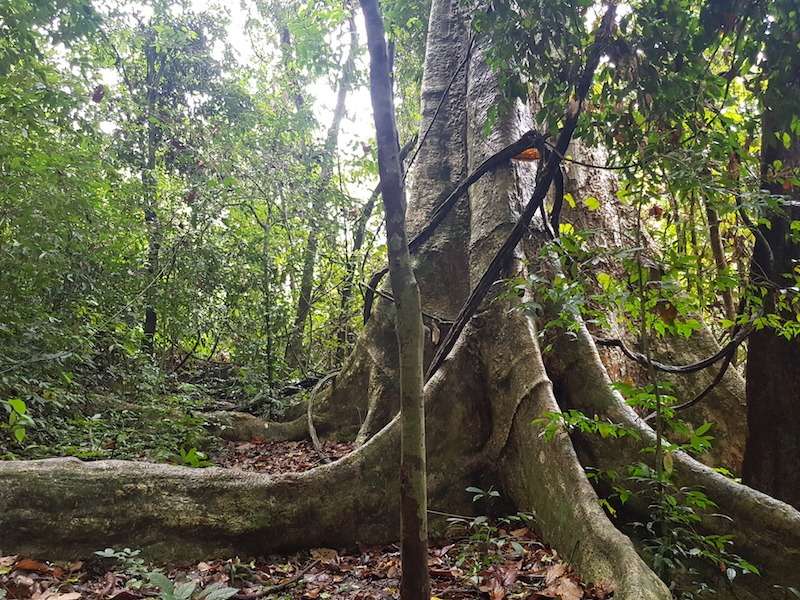 The Pajo Waterfall in dense jungle

Real rain forest in the south of Thailand

The Pajo Waterfall is in Bacho district in Narathiwat province. The word “Pajo” is a local Malay word meaning “waterfall”. The falls are in the Budo Su Ngai Padi National Park. In 1974 the government established the Pajo Waterpark which became later the national park Budo Su Ngai Padi. The park is part of the Sankala Khiri Mountain range. Until the early 70s, the jungle in Narathiwat was the hideout of communist rebels. It is indicated on Google Maps and is easy to find. The park covers parts of Narathiwat, Yala, and Pattani provinces and has an area of 294 sq km. The forest is probably the closest to a real rainforest you will find in Thailand. I only ventured a short distance into the jungle but it was extremely humid, dense, and oppressing. 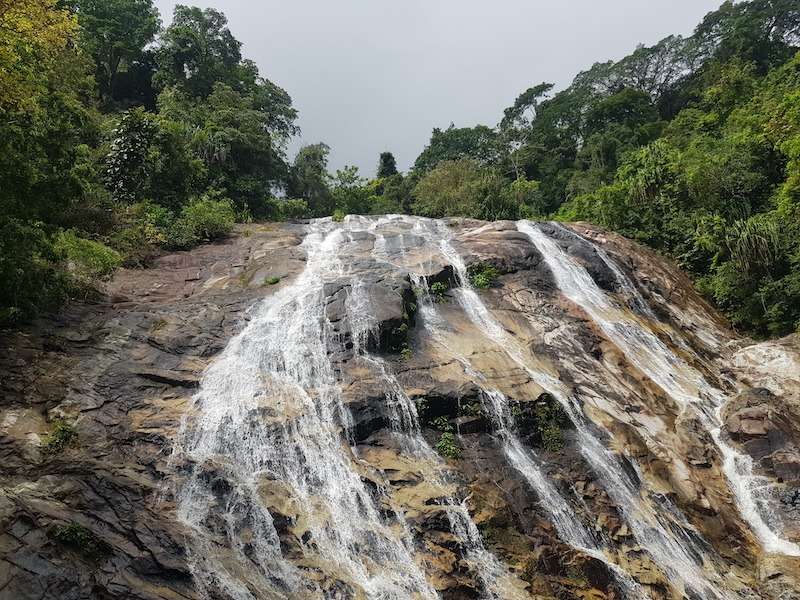 The Pajo Falls at the Budo Sungai Padi National Park

Long before the Pajo Falls was established as a tourist destination the Royal Family visited this place. King Prajadhipok, Rama VII, visited the falls in 1927, the same year in which a Royal Pavillion was opened. The royal bungalow is only a couple of 100 meters from the falls and looked deserted. On a boulder at the bottom of the falls, you can find the Royal Cypher of the Rama VII.

King Rama IX visited the falls on March 24 1959 with his family and maybe stayed at the Royal Bungalow or at the Thaksin Ratchaniwet Palace in Mueang Narathiwat. The king left his Royal Cypher on the same boulder, together with inscriptions of the signature of Queen Sirikit and the princess Chulabhon and Sirindhon. The staff of the Budo Sungai Padi National Park gave me this picture. 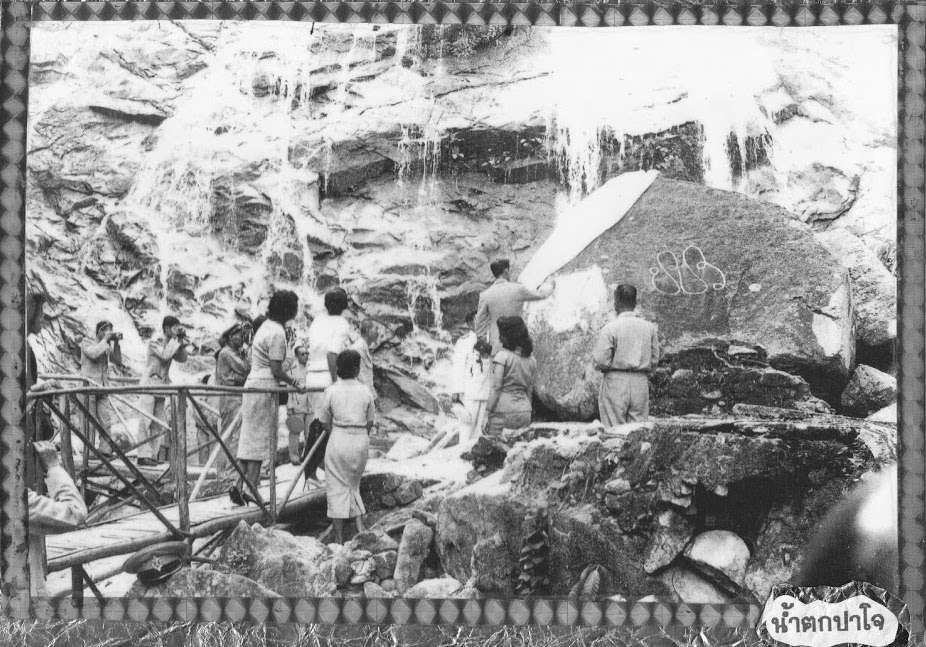 King Bhumibol Adulyadej at the Pajo Falls in 1959. Photo courtesy of the national park.

American soil scientist Robert Larimore Pendleton visited the falls on July 6, 1936, and took a picture of his party in front of the boulder. You can find the photograph on the website of the American Geographical Society Library, University of Wisconsin-Milwaukee Libraries. 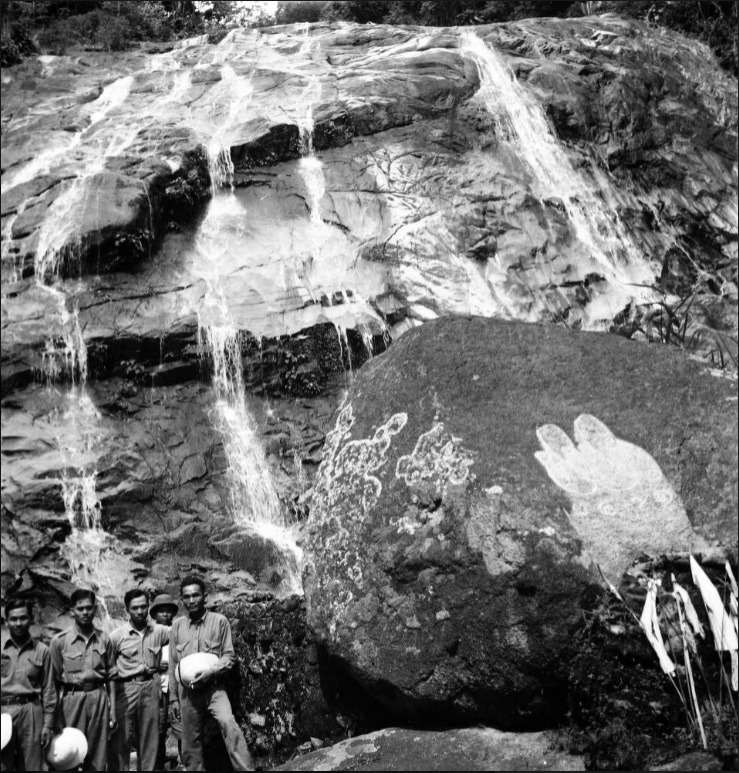 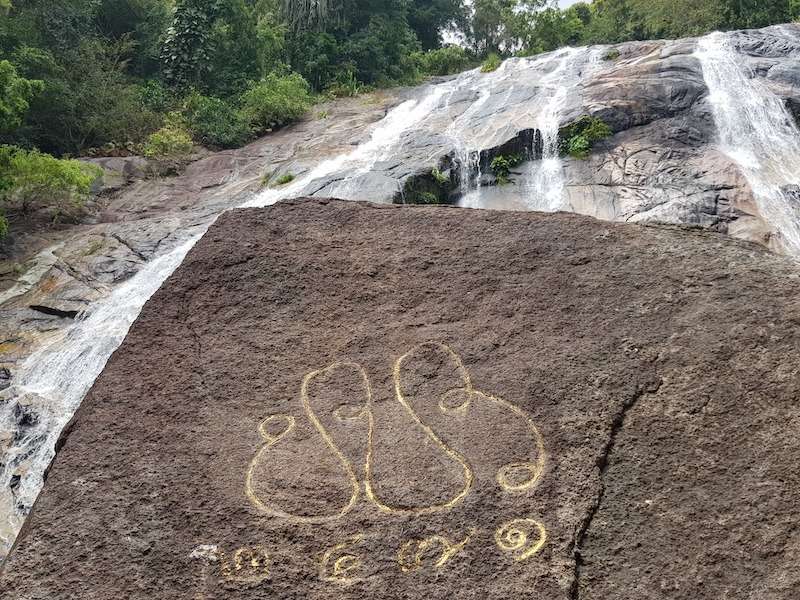 Royal Cypher of King Prajadiphok at the Pajo Falls

On the same day I took this picture of the Royal Cypher of Rama IX: 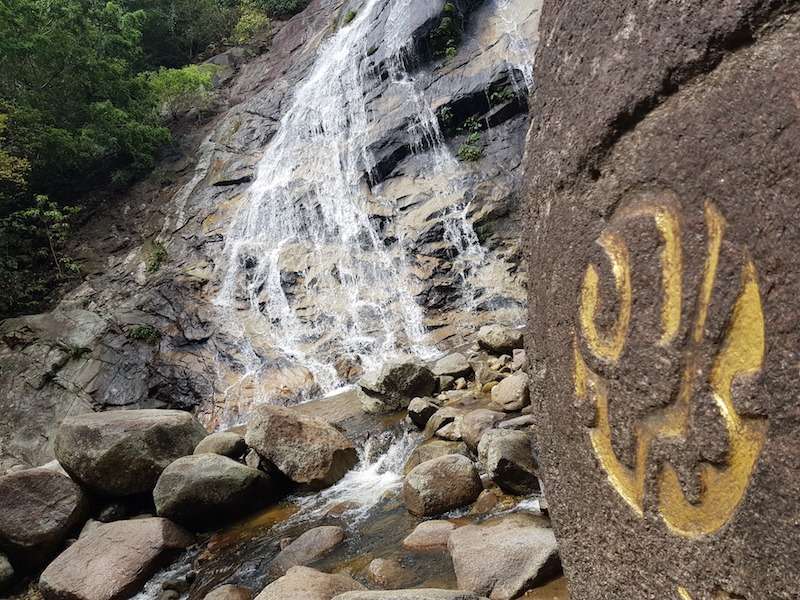 The Royal Cypher of Rama IX at the Pajo Waterfall, Narathiwat

It was my second visit to the falls. During my first visit in May 2018, there were a lot of local people visiting the falls enjoying a picnic and swimming in the falls. Pictures of my first visit you can find in the story of my trip three years ago. This time I was much earlier in the day and I was alone. The park has a small visitor center with some pictures and information in Thai. Apparently, the majestic hornbills are still prevalent in the park as there is information about the different species.

The falls are very pretty but unfortunately, the management of the park leaves much to be desired. The wooden walkways are in a poor state and outright dangerous to walk on. A stairway leads to the first level but there is nothing to see there. As I was alone I didn’t bother to go further up. There is a nature trail marked by bright blue arrows but the trail was hard to find. As I wrote earlier I followed it for a while. It was really beautiful. Just after a couple of minutes, you enter a dense rainforest-like, very humid environment. After a short walk, I was sweating profusely. I can imagine that it must be possible to make great rainforest treks in this park. None of that has been organized yet.

The staff was incredibly friendly and helpful but everywhere I went I found discarded plastic bottles and other trash. 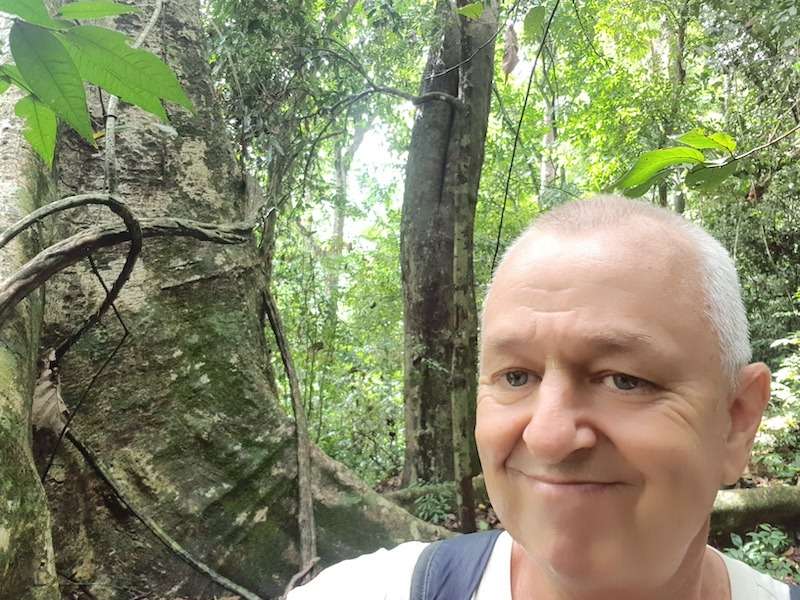